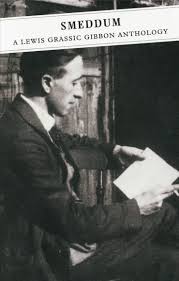 Lewis Grassic Gibbon‘s Smeddum, the tale of the Menzies family in rural north-east Scotland, is a beautifully crafted, and really satisfying short story. The word ‘smeddum’ means ‘spirit’, ‘determination’, ‘true grit’. That grit is now metaphorical, but the earliest recorded use of the word shows that smeodoma in Old English was used as a gloss for the Latin word polenta. That the word that forms the title of this short story should have such natural origins is entirely in keeping with earthy nature of the narrative. The tale is told from a thoroughly rural perspective. Animal imagery runs through the text, serving to characterise the main players in the unfolding drama. Meg, for instance, on first appearance is described as being “a big roan mare”, the first of frequent comparisons made between the heroine and horses. This stands in stark contrast to the layabout Will, who emerges from his bed “like a weasel”. Equally connected to the earth is the eldest son Jock, whose main confrontation with his mother takes place on a newly-ploughed field. By contrast, one of the daughters, Kath, is compared to the swallows “dipping and flying near Kinneff”: Kath is not tied to the earth, not bound by the same chains as the rest of the family. It is she who seems most likely to fly the nest, to break the Menzies mould. But she is also very clearly her mother’s daughter, the only one of the offspring who is not “sniftering and weakly”.

The first time I read Smeddum, I was struck by how much the narrative reads like gossip. The reader is subtly presented as being part of the community, involved in the story from the outset. For instance, the first description of the Menzies’ home appears in the following account of Meg’s hard labour: “For from morn till night she was at it, work, work, on that ill bit croft that sloped to the sea”, the use of the demonstrative that implying a shared, pre-existing knowledge between narrator and reader (notice how such involvement of the reader would disappear if the demonstrative was replaced by the article an). Such subtle linguistic choices are part of what makes this story so outstanding. The assumption is that the reader knows exactly which croft is referred to, while the narrator offers some juicy scandal on Will’s drinking or Kath’s elopement, with a couple of waspish comments on various members of the family. On Will’s death, the narrator observes: “Well, he drank himself to his grave at last, less smell on the earth if maybe more in it”; and after Kath’s departure, the narrator speculates that the community has seen the last of “young Kath Menzies and her ill-getted ways”. And the narration moves along with an effortless rhythm, the repetition of the two stresses regularly marking out grammatical constituents: “for if ever a soul had seen her at rest when the dark was done and the day was come he’d died of the shock and never let on.”

The heroine, Meg Menzies, is Gibbon’s answer to Austen’s Mrs Bennet. In fact, she works as a kind of anti-Mrs Bennet. Both respond admirably to the economic necessities of their circumstances (Meg does half Will’s work on a regular basis; Mrs Bennet recognises the danger on the economic horizon for five brotherless daughters), both are concerned with marrying off some or all their children (to two of her children, Meg says: “you’d to marry or burn, so I married you quick”), and both have a daughter who causes a potential scandal by running off with an inappropriate man. But while Mrs Bennet’s methods of securing the marriage of her children sometimes involve circuitous schemes (like forcing Jane to ride her horse in the rain to Netherfield in order for her to stay overnight in Bingley’s company), Meg’s methods with some of her children are more direct: she rides her bicycle to where her son Jock is ploughing a field (and ploughing it poorly, in Meg’s opinion: there is a clear undertone that she’d do it much better herself) and shakes him by the ear “till it near came off” until he promises to do right by Ag Grant. Such treatment would not have been new to Jock. Meg’s rough handling of her children is part and parcel of her ‘no-nonsense’ approach to life. Meg doesn’t put her children down gently – she plonks them down, scours their faces until they are red, tidies them up and sends them out, to school when they are young, to be married when they are older. The “vulgar words” she’s accused of using are reflections of her forthrightness – she has no truck with butchers who call her old, with doctors who wrongly accuse one of her children of theft. But true vulgarity in this short story is marked by vulgar deeds, not vulgar words.

The ending of Smeddum is breathtaking, and I won’t spoil it for those of you in the enviable position of being able to read this little gem for the first time. It comes like a bolt out of the blue, with one simple utterance bringing together so many threads of the narrative that the reader was only dimly aware of. Do what you can to get a copy of this short story. And as to whether you’ll enjoy it, well, as Meg says: “It all depends if you’ve smeddum or not”.

Nan Shepherd was reticent about her novels. The author, Jessie Kesson, knew Shepherd for three years before discovering she had written one. Even then, Kesson found out, not from Shepherd herself, but one of Shepherd’s former students. That same ex-student recalled: On the morning after the publication of The Quarry Wood, as she entered her […]

Scottish literature enjoys a wide international readership. Many Scottish authors, whether creators of classic novels or contemporary writers, have been translated into foreign languages. Germany is no exception to this. Walk into any German bookshop and you will find at least one book written by a Scot. Yet one great Scottish writer seemed to have […]