In September, 2007, Murray Pittock and I organized a weekend conference at the University of California, Berkeley, ‘Scottish Romanticism in World Literatures,’ which was attended by scholars from the British Isles, Spain, Italy, France, Germany, Japan and Canada, as well as all over the U.S. One year later, I’d like to take this opportunity to reflect on the terms that made up the title of the conference: Scottish Romanticism, World Literature.

What happens to Romanticism when Scotland is part of the picture? English-language literary histories still identify Romanticism with “English,” if no longer so exclusively with lyric poetry or an aesthetic philosophy derived from Coleridge or Shelley. Scotland remains associated with another pseudo-historical category – that is, an ideological category disguised as a historical one – the Enlightenment.

The antithesis between Scottish / Enlightenment, on the one hand, and English / Romanticism, on the other, was fixed early in the nineteenth century: Francis Jeffrey’s attack on Wordsworth in the Edinburgh Review accompanied that periodical’s retooling of Scottish political economy into an ideological program, and provoked Wordsworth’s reciprocal scorn for “Scotch philosophers” – even as his own poetry developed Enlightenment themes. There is no exact Scottish equivalent to the watershed publication of Wordsworth’s and Coleridge’s Lyrical Ballads in 1798. James Macpherson’s “Ossian” poems were arguably the founding texts of a North Atlantic Romanticism in the early 1760s; Robert Burns’s Poems Chiefly in the Scottish Dialect adapted the “language really spoken by men” to a sophisticated poetics in 1786; and Walter Scott’s Waverley changed the shape and weight of the novel after 1814. None of these, however, constituted the experimental break with eighteenth-century norms, flagged with a manifesto (Wordsworth’s 1800 preface), that would make Lyrical Ballads not just a Romantic but a proto-Modernist event – at least, in the retrospect of literary history.

The “Ossian” poems appeared at the same time as the quintessentially enlightened projects of the Scottish human sciences – indeed, Edinburgh philosophers subsidized Macpherson’s mission to bring back an ancient Highland epic. As I’ve argued elsewhere, Scottish and English periodizations simply do not match; in the Scottish case it makes more sense to think of a Romantic-and-Enlightenment century, from David Hume’s Treatise of Human Nature to Thomas Carlyle’s French Revolution, than a distinct phase of Romanticism (divided between generations of major poets) opening around 1790. 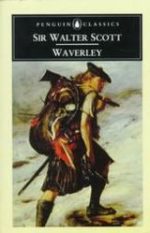 What happens to Romanticism when Enlightenment is part of the picture? Hume’s Treatise provided a theory of the imagination, and of fiction, as producing and produced by – rather than intrinsically alien to – “common life,” the social, the everyday. Fully actualized in Scott’s historical novels, Hume’s theory would be passed on through them to the realist fiction that dominated nineteenth-century European literature. European realism, in other words, was a Scottish philosophical invention, given fictional form and substance in the Waverley novels.

Yet Scotland remains peripheral to the mainstream institutions of scholarship in the period: this summer’s (2007) joint conference of the British Association for Romantic Studies and the North American Society for Studies in Romanticism featured just ten papers on Scottish topics out of a total of nearly 250.

The Scottish century of innovations in poetry, philosophy, periodicals and fiction had a massive impact outside the British Isles. Hugh Blair’s Rhetoric and Archibald Allison’s Aesthetics trained the academies of the New World. Adam Smith’s Wealth of Nations supplied decisive philosophical arguments against slavery as well as against protectionism. Napoleon and Thomas Jefferson were among the devotés of Ossian, while American poets from Freneau and Whittier to Whitman and Frost took their cue from Burns, the “people’s poet,” as Robert Crawford argued in his lecture at last year’s Scottish Romanticism conference. Scott’s novels, as Franco Moretti put it at a roundtable on “The Novel in World History,” were the most influential body of work in the history of the genre. Their planetary diffusion coincided with an imperial expansion of British military, administrative and commercial networks that were in large part managed by Scots.

What kind of a “world” was it that Scottish Romanticism helped shape? A continental-European, North Atlantic, settler-colonial world, with Scotland at its center: you could map this world – one where the “tidal wave of modernization” forced a look back at the pre-modern past, materialized in “primitive” regional societies in the process of being overwhelmed – much as Eric Hobsbawm (in The Age of Capital) mapped the nineteenth-century global diffusion of opera-houses. Nor did it all flow one way. The Ossian epics set the pattern of an indigenous high culture for a counter-imperialist national imaginary, while Scott’s historical fiction spawned anti-colonial as well as colonial mutations: Ivanhoe was Ho Chi Minh’s favorite novel as well as Tony Blair’s. 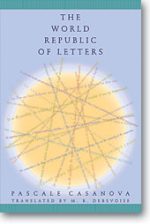 Pascale Casanova’s recent book The World Republic of Letters (La république mondiale des lettres, 1999; English translation, 2004) may help us to think about Scottish literature in contexts besides these British and imperial ones. Casanova shows that, from the seventeenth century onwards, Paris and the French language emerged as (respectively) the capital city and universal medium of what would eventually become “world literary space.” At the core of world literary space, or what intellectuals at the time called “the republic of letters,” was the idea of literature as an autonomous domain, one that could set its own terms and values, relatively free from dictation by church or state. The republic of letters was cosmopolitan, internationalist, or rather pre-nationalist, both in its own ideology and in its reception beyond France. Indeed, the second great stage of the historical development of world literary space, the proliferation (from the late eighteenth century) of distinctively national literatures that would later be called Romanticism, defined itself in opposition to the cosmopolitan, Enlightenment hegemony of French. Casanova rather sketchily acknowledges Great Britain as an emergent rival centre in the course of the eighteenth century, and she pays next to no attention to Scotland. Nevertheless her analysis frames Scotland as a highly interesting case, complementary to Tom Nairn’s influential account of Scotland’s anomalous relation to the historical pathways of modernization and nationalism in The Break-Up of Britain. Scotland’s project of cultural modernization in the eighteenth century, the Scottish Enlightenment, depended on the establishment of an autonomous public sphere of letters and science, based in the secular institutions of the Lowland burghs, far enough removed from the seat of government in London. While the Scots literati harnessed English as the linguistic vehicle of Enlightenment, they sought to integrate their philosophical projects with the European republic of letters of which Paris was capital city. Thus, if the Scots invented British literature, as Robert Crawford and others have claimed, it was to annex it to that grand horizon of “world literary space” – over and against a relatively provincial London, even though London may have been the imperial centre of commerce and patronage.

Current disciplinary history holds that the modern, restricted category of literature in English – meaning the fictional genres of drama, prose and poetry, or writing loosened from factual or instrumental reference – emerged conceptually in the Romantic period, as it disaggegrated from the larger field of the Enlightenment republic of letters, comprising all kinds of written discourse. The republic of letters had been, at least notionally, a cosmopolitan domain (although restricted to gentlemen), and the disaggregation of literature brought a compensatory investment with nationalist associations and ideologies as well as with a vertical appeal to “the people,” including (sometimes) female people. Scotland provides an exceptionally clear view of this general transformation, in part because of the infrastructural shift that took place from the university curriculum, matrix of the projects of Enlightenment, to an industrializing literary marketplace, in the Edinburgh publishing boom of fiction and periodicals after 1800. Scott’s novels forged a synthesis that would not outlast his generation: managing a late-Enlightenment, cosmopolitan integration of Scottish literature with European (not only British) traditions, at the same time refracting newer nationalist energies.

We might go back a generation, to Adam Smith, to identify an exemplary case for reading the prehistory of “literature” among the pre-disciplinary welter of subjects and discourses that comprised, in the eighteenth-century Scottish curriculum, the grand project David Hume had called “the science of man.” Smith, best known today (if not always accurately) as the prophet of free-market capitalism in his great prose georgic The Wealth of Nations, was also the author of The Theory of Moral Sentiments, a groundbreaking treatise on the ethical psychology of modern civil society. Smith developed these books from his lecture courses on jurisprudence and moral philosophy, since the Scottish universities primarily trained lawyers and ministers of the Church of Scotland. Smith also lectured on rhetoric and belles lettres, and in his own view – at a period when the modern fields of humanist and social-scientific inquiry were emerging in the Scottish universities, yet before their hard-and-fast separation into distinct disciplines – all these philosophical inquiries were interconnected, all spoke to and inflected each other. After the chilling of the Enlightenment project in the academy (due to counter-revolutionary pressure through the patronage system that controlled appointments and careers), it was resumed in the marketplace and in the booksellers’ genres of periodicals and fiction: so that Smith’s and Hume’s great theme, the science of man, would be carried forward in the Edinburgh Review and the novels of Scott and John Galt.

Scottish Romanticism (to abide with the title for now) discloses a place and time, and a changing institutional terrain, when the humanities were still a human science. It helps us imagine for ourselves an intellectual matrix in which conversations among disciplines and subdisciplines might not be constrained by a distinction between “the humanities” and those (presumptively inhuman) other fields. I don’t wish to suggest we should return to that late-eighteenth-century moment of disciplinary emergence, even if we could, still less that we should make up some contemporary simulacrum or equivalent. We are better off where we are, even as that moment helped bring us here. Still, and apart from its rich resources of intrinsic interest, the case of Scottish literature circa 1740-1840 may open up an awareness of alternative ways of imagining literary history and literary genres in their relations to other fields of discourse, other ways of knowledge.

Professor Duncan’s Scott’s Shadow: The Novel in Romantic Edinburgh will be published at the end of 2007.

‘Scott-Land: The Man Who Invented a Nation’ by Stuart Kelly

The appearance of a book-length reassessment of Walter Scott aimed at the general rather than academic reader is as welcome as it is unexpected. To his credit, Stuart Kelly resists the debunking routine that has become more or less compulsory in modern treatments of Scott and Scotland. At the same time, he warns us that […]