In the summer of 2005 The Herald conducted a survey asking its readers to vote for the ten best-loved paintings in Scotland and published the results on 30 August 2005: Salvador Dalí made the top of the list with his Christ of St John of the Cross, followed by Avril Paton’s Windows on the West, Flood Tide by Joan Eardley, The Orange Blind by F.C.B. Cadell, The Tay Bridge from My Studio Window by James McIntosh Patrick, Lady Taking Tea by Jean-Simeon Chardin, The Reverend Robert Walker Skating on Duddingston Loch, attributed to Sir Henry Raeburn, Rembrandt’s Man in Armour, Lady Agnew of Lochnaw by J.S. Sargent, and Lady in a Fur Wrap by El Greco. 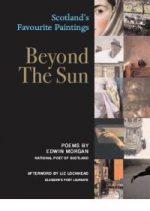 Not very long after this Lesley Duncan, The Herald’s poetry editor, received a handwritten envelope in which Edwin Morgan sent her “ten poems inspired by the ten pictures of your competition”, as she quotes from Morgan’s accompanying letter in her introductory essay of Beyond the Sun: Scotland’s Favourite Paintings, and confesses that she “was not so much interested as thrilled”. Her enthusiasm for Morgan’s poems on these paintings was in fact so great that the poems were published aside the paintings only nine days later in The Herald of 9 September 2005.

I was so curious to read these poems that I instantly wondered how I could possibly get my hands on a copy of The Herald. However, if you are not based in Scotland or at least somewhere in the UK, it is not so easy to get hold of The Herald &mdash: when you are based in Dortmund (a city in the West of Germany) it’s nearly impossible unless you phone The Herald and have them send you a back issue. Thing is though: When you are living in the UK you don’t have to pay anything for postage & packing, but if you live somewhere else the p&p costs are far higher than the price of the actual paper (I was so shocked that I forgot the actual price, but I think it was around £12.00 – just for p&p!) And I didn’t even want the whole paper, just those two pages displaying Morgan’s poems and the paintings! Luckily an old friend of mine lives in London. So I had the paper sent out to him — for free! —, and he just ripped the two pages out for me, popped them in an envelope and posted them off to Dortmund — not entirely for free, but a kiss and a pint on our next meeting did the trick.

To cut a long story short: On finally receiving the paper I immediately knew it had definitely been worth the fuss! For not only did this double page look fantastic with the pictures being reproduced in full colour and all, but Morgan’s way of getting into these paintings is quite extraordinary since he has the magic ability of looking beyond the canvas, of finding the story of those characters portrayed in these paintings, thus enabling the reader to do so as well — not through pointing and lecturing, not at all! — but through opening up unexpected, often quite surprising ways of looking at them. Rilke used this technique in his Duino Elegies (1922); Elegy No. 5 was actually written in relation to Picasso painting La Famille de Saltimbanques (1905).

Morgan enters into an intriguing dialogue with these popular paintings as well as with their painters.

If The Reverend Robert Walker Skating on Duddinston Loch, for instance, took a fall, he would — according to Morgan — find himself wrapped in his wife’s shawl, shivering in front of the fire — and it would do him some good, too, because

Should you feel the same about The Reverend you’d probably welcome this little animation by David Moffat in which he has the well balanced skating minister tumble: “The Rev. Robert Walker Skating on Duddingston Loch”.

Through reading these poems you’ll see these paintings spring to life: The Lady in Fur Wrap begins to stroke her fur, Lady Agnew of Lochnaw discusses with Sargent in which way she is going to be presented in the painting, and even the tenement building in Avril Paton’s Windows on the West becomes a living “seventy-eyed creature” that “stretches, yawns, shakes the roof snow / Off its back in clumsy dollops”.

Yet Morgan also opens up ways of discussing what art may achieve — particularly in Flood Tide by Joan Eardley, Morgan’s favourite painter, in which nature becomes part of the artist’s work — and where to draw the line: In Rembrandt’s Man in Armour Morgan clearly admits to the masterly crafted artwork but criticizes its subject, a man in full armour, helmet, shield:

Having read these poems and studied the paintings I very soon realized that I wanted to keep them, look at both of them in combination from time to time. Also being bent a couple of times to fit into the envelope had not done the pages much good: they looked rather crumpled already, and I began to wonder how soon the colours would begin to fade. How I wished I could get a nice wee book, preferably hardcover in a nice square or nearly square format, not too small, not too large, with reproductions of the paintings on one side and the poem right next to it on the other, printed on nice and think, slightly glossy paper. Maybe even accompanied by an introduction by Lesley Duncan telling how all this came about and an essay on the relation between art and poetry, accompanied by some delightful thoughts of another outstanding poet. And although there was no fairy around (or at least none I was aware of) at the time, about a year later I learned that my wish would come true!

Nineteen months later, on 27 April 2007, poems and paintings had been made into just that book, with an introduction by Lesley Duncan, an essay by Alan Riach, and a delightful afterword by Glasgow’s poet laureate, Liz Lochhead. It was launched in Glasgow’s newly refurbished Kelvingrove Art Gallery marking Edwin Morgan’s eighty-seventh birthday. I got on a plane from Cologne to Edinburgh, from there took the bus to Glasgow on that day, and managed to get hold of a fresh copy, just to make sure.

Just in case you wonder where I’ll be reviewing A Book of Lives – Well, it’s equally brilliant, includes Morgan’s latest poems, some of which are absolute must-reads, like the poem he was invited to write as National Poet of Scotland by the Scottish Parliament for the opening of the new Parliament Building in Edinburgh on 9 October 2004, or his fiery polemic on the importance of poetry in society and the national identity of a country titled ‘Acknowledge the Unacknowledged Legislators!’, or his amazing journey through time, past present and future, finally published in full length, the ‘Planet Wave’. It also includes five poems from Beyond the Sun; it’s not the same without the paintings, but if you are more on the practical side, you might prefer that.

In any case, you would not want to miss out on A Book of Lives, especially if you haven’t got a copy of Morgan’s Love and a Life, for the whole sequence of these fifty poems has been included amongst which you find some of greatest love poems of the last fifty years. In this sequence Morgan opens up a whole kaleidoscope of different kinds of love, religious, ideal, mad, erotic or passionate. Love is “bashed pillow, crumpled sheet, / unenviable fate”, “the crushed ice that tingles and shivers and clinks fidgin-fain for / the sugar-drenched absinth to fall on it and alter its state”; but

A Book of Lives is published by Carcanet Press (February 2007); Beyond the Sun: Scotland’s Favourite Paintings is published by Luath Books (April 2007). Both titles are available from their publisher and fromBooksfromScotland.com.

The Milk of Space

Take the voyage out then! Drink the milk of space! —’Islands’ Some notes on Edwin Morgan’s science fiction poems (written before his last voyage out) Among Edwin Morgan’s favourite authors in his 1920s and 1930s childhood and teenage years (conveniently, for us, listed in his Letts Pocket Diary for 1933) were Jules Verne, Rider Haggard, […]

New Currency or Old? – ‘The Coin’, by Edwin Morgan

The Coin We brushed the dirt off, held it to the light. The obverse showed us Scotland, and the head of a red deer; the antler-glint had fled but the fine cut could still be felt. All right: we turned it over, read easily One Pound, but then the shock of Latin, like a gloss, Respublica Scotorum, […]

‘The International Companion to Edwin Morgan’ edited by Alan Riach

There are enough examples of the critical companion genre at this point that we might posit a few basic models. In the first, the companion employs an overarching structure that conceptually frames and clarifies a vast and unwieldy subject matter. For instance, in the Edinburgh Companion to Twentieth-Century Literature, edited by Brian McHale and Randall […]