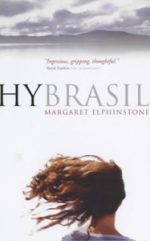 Asked to write about Atlantic crossings, I find myself waylaid by islands. Three of my novels (The Sea Road, Hy Brasil and Voyageurs) involve crossing the Atlantic. Like the protagonists of The Sea Road and Voyageurs I have sometimes arrived safely at the continent on the other side. But, like the heroine of Hy Brasil, I have also stopped at islands, both real and imaginary, in the Atlantic Ocean, and felt myself – contrary to all post-Galilean geographies – to be on the edge of the world, where the only horizon to the west is where the sun sets directly into the sea.

Two books (both bought on the other side — my other side — of the Atlantic) shaped my thoughts about the ontological status of Atlantic islands: geographical, spiritual, textual, imaginary, escapist … or all of these at once? Babcock’s Legendary Islands of the Atlantic (1922) is a scrupulously thorough chronicle of non-existent islands from Plato’s Atlantis through to the ‘Sunken Island of Buss and other Phantom Islands’. It has a full chapter on ‘The Island of Brazil’, but includes rock-solid islands which have also been imaginative constructs profoundly affecting the European world view, such as Greenland, Newfoundland, the Azores and Cape Verde Islands. In the absence of an accurate measure for longitude, who was to say what was a geographical entity, and what was another illusion on a tossing horizon? I found Johnson’s Phantom Islands of the Atlantic in a bookshop in Fredericton, New Brunswick, where it was first published, in 1994. Johnson’s authority lies not so much in his (very useful) bibliography than in the fact that he sailed across the Atlantic five times in a small yacht. The chapter ‘Hy-Brazil’ begins: ‘No other phantom island in the Atlantic is cloaked in so many identities as Hy-Brazil’ (Phantom Islands p 151). With that sentence my novel Hy Brasil was conceived.

Hy Brasil interrogates the relationship between real and imaginary islands. I discovered that Hy Brasil only ceased to be recorded on British Admiralty charts in 1865. In a world of calculable longitude, steamships, telegraphs and origin of species through natural selection, the Admiralty chart — there is no higher authority, once out of sight of land — had continued to invest Hy Brasil with full ontological status as a physical entity. Searching further, I found John Yeats’ fine painting Horse Racing in Hy Brasil, which confirmed the Irish provenance, and one man’s perceived reality, of this mysterious island. Studying Yeats’s painting, I realised that, at any date, an artist or writer who treated Hy Brasil as contemporary reality could actually make it so. A mistake on the part of an Admiralty surveyor becomes deliberate irony for the artist.

I bought a National Geographic chart of the Atlantic sea floor, and found Faraday’s Mount, the highest point on the North Atlantic ridge. I only had to raise it a few hundred metres — a small liberty, considering what some fiction writers get up to — to create my archipelago (I acknowledge all my sources within the text of Hy Brasil, and Faraday the surveyor is duly mentioned). The exact bearings of the island can be worked out from internal evidence within the text. My heroine, Sidony, muses at one stage on how bearings have been treated in other fictions:

Mythical Atlantic islands have, of course, existed in European consciousness since Plato, and possibly long before. Observant readers of Hy Brasil have identified literary sources for Hy Brasil ranging from Homer to Joyce via Plato, Pliny, Shakespeare, Swift, Defoe, Melville, Charlotte Bronte, Stevenson, Ballantyne, Barrie, and the anonymous author of the Brendan Voyage, among many others. Hy Brasil is Atlantis, the Hesperides, Tir n’an Og, Lyonesse, Thule, all of which have their origins in European myth and folktale. But behind myth there has to be substance: there are actually islands out there. Pytheas was right about that; so was Tacitus and so was Leif Eirikson. For as long as the sun set into the sea at the unknown western edge of the world, there was the tantalising possibility of yet more islands, yet more wealth, yet more land.

The colonial aspect of the westward impulse is unavoidable. My Hy Brasil was originally colonised by the Portuguese, at almost the same time as they arrived in the Azores. Henry the Navigator mentions the possibilities for economic exploitation. A slave ship was wrecked there in the eighteenth century, and some of the Africans aboard escaped and settled there. In 1812 it became a British colony, after being the site of a skirmish between the British and American Navies. Twentieth century Hy Brasil was strategically crucial in the Cold War. Economic prosperity in the 1950s and 1960s was dependent upon the large NATO base located at St Brandons. However, a revolution in 1958 gave it equivocal independent status. The President, James Hook, combines attributes of his eponymous literary ancestor with aspects of Castro’s early career. The novel plot, set in 1997, is a thriller based around drug smuggling, dubious electioneering and one of the volcanic eruptions so prevalent along the Atlantic ridge.

My idea was to create a history that could have happened if the islands had happened to be real. At the same time I acknowledge — or steal — the textual grounds for the colonial history of Hy Brasil. The first café Sidony stops at is Caliban’s Fast Food Diner, the highest mountain is Mount Prosper, and Ferdy’s Landing lies on the other side of the island. Whether the place names were given by literary islanders with a taste for irony, or whether this is in fact Prospero’s (or Caliban’s) island, is left open, but there are many other resonances with The Tempest, and other island texts, which, if the islands are geographically real, can only be defined as uncanny.

The first arrival on Hy Brasil was not driven there by any commercial impulse. The Navigatio of St Brendan is central to my interrogation of imagined island spaces. Real voyages have been made to establish the geographical accuracy of Brendan’s travels. Tim Severin undertook a replica voyage in a skin boat from St Brendon’s point of departure in Ireland to his landing place in Newfoundland. I have visited the points of departure and arrival and can vouch for both being solid ground. That may look like proof: Severin finds rational explanations for all the supernatural phenomena encountered on Brendan’s voyage between these two fixed points. I prefer (one keeps dryer) to take St Brendan more literarily than littorally; St Brendan’s voyage is a pilgrimage, after the manner of the white martyrdom of the Celtic church, in which the distant island represents spiritual fulfilment. Brendan 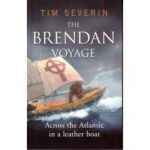 For the Celtic monks who chose the white martyrdom the sea voyage and the spiritual journey were the same thing, and to ask how one related to the other was presumably a non-question. In the modern world the relationship between physical and psychological reality is the question: the ironic gap between the two becomes the space in which textual islands can be constructed, revised and reconstructed. Another Irish text, whose author specifically acknowledges his debt to Severin’s travel book The Brendan Voyage, is Shaun Davey’s Suite for Orchestra and Uillean pipes, also named The Brendan Voyage. Many of my own journeys have been accompanied, and transfigured, by Davey’s version of the voyage to Brendan’s islands. Music takes the Navigatio into a farther space that neither ships nor words can quite reach: perhaps this is the medium where the modern reader/listener can temporarily close the gap between real and imaginary crossings, so that, in spite of all that we know to the contrary, the boundless possibilities of the western horizon can always remain open.