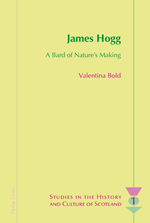 As the title suggests, this book offers a close study of James Hogg’s poetry, treating his diverse output over six chapters. But this represents only half of the book: Valentina Bold devotes another six chapters not to Hogg directly but to a broader, though significantly related, subject. Hogg was a pivotal figure in the lively tradition of Scottish autodidactic poetry in the eighteenth and nineteenth centuries which, Bold argues, produced a creative mixture of tradition and innovation, ‘a vigorous alternative to the mainstream tradition of Scottish poetry’.

Divided into three parts, the book first identifies two threads feeding into the ‘peasant-poet’ stereotype. The opening two chapters establish phenomena that were often joined in eighteenth-century myth-making: first, the figure of the ‘autodidact’ as it emerged around Allan Ramsay’s The Gentle Shepherd and James Macpherson’s Ossian; and second, the ‘nature’s bard’ as it became embodied in Robert Burns, the so-labelled ‘Heaven-Taught Ploughman’. Bold traces the beginnings of the ‘peasant-poet’ and ‘the making of autodidactic models’ that poets would emulate in the nineteenth century. It includes, for example, a lucid examination of the complex dynamic governing relationships between self-taught poets and their supposed superiors, reflected in Burns’s ambivalence in dealing with the Edinburgh literati and Hogg’s sometimes fraught relationship with Walter Scott.

The six chapters at the heart of the book focus on Hogg’s poetry, contextualising it within the Scottish autodidactic tradition. A chapter exploring the growth of Hogg’s ‘Ettrick Shepherd’ persona treads familiar ground: Hogg’s early struggles because of his poverty and lack of formal education, the ways in which he both benefited and suffered from his rustic-poet image (as had his predecessor Burns), and the warping of his reputation in the pages of Blackwood’sNoctes Ambrosianae. This rehearsal is indispensable, however, for placing Hogg within a study of autodidactic poetry and tracing the development of his role of ‘national peasant poet’. Significantly, what this chapter also introduces is the fruit of Bold’s own fieldwork in the Borders, evidence of Hogg’s reception as it has been preserved and perpetuated by oral tradition. 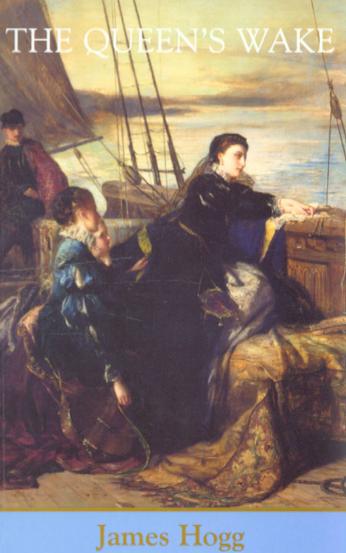 The Forest Minstrel (1810) and Songs by the Ettrick Shepherd (1831); and in the modified ballads of The Mountain Bard (1807); and in new poetic forms, ‘extended ballads’, such as The Queen’s Wake (1813). In a chapter on ‘Nation and Religion’, Bold weaves through works such as The Jacobite Relics (1819, 1821) and The Royal Jubilee (1822), exploring the ambiguities that result from the complex ‘mixture of poetic loyalties’ that faced an autodidactic Scottish patriot who was also a British poet, a confusion compounded by Hogg’s Presbyterianism. In analysing Hogg’s ‘fantastic journeys and royal adventures’ such as Pilgrims of the Sun (1815) and Queen Hynde (1825), Bold argues that Hogg ‘wholly supersedes’ his peasant-poet stereotype, citing sophistication in his blending of literary, oral-traditional, historical, and hagiographical material. In particular, Bold points to the combination of Hogg’s breadth of reading with his knowledge of oral traditions, which ‘endowed Hogg with both an unusual ability to absorb information and the skill to present it in a uniquely imaginative, and engaging, way’. Examining the parodic qualities of The Poetic Mirror (1816) and A Queer Book (1832), Bold describes Hogg’s ‘uniquely experimental’ use of images: he ‘fragments sources and reassembles them as if in a kaleidoscope’.

Bold identifies a number of prototypes that Hogg’s Ettrick Shepherd persona offered to subsequent ‘poets of nature’s making’. The third part of the book explores the Scottish autodidactic tradition that emerged during Hogg’s lifetime and continued throughout the nineteenth century. Comparing their work to that of formally-educated writers, Bold finds the autodidacts to be more eclectic in their use of sources, more creatively adventurous. She follows the careers of ‘uneducated’ poets such as Allan Cunningham and Robert Tannahill; ‘educated’ autodidacts such as John Leyden, William Tennant, and Henry Scott Riddell; and women autodidacts including Isobel Pagan, Janet Little, Mary Pyper, Maria Bell, Isabella Craig-Knox, Elizabeth Hartley, Janet Hamilton, Marion Bernstein, Jessie Russell, and Ellen Johnston. These poets were influenced by Hogg and, in turn, had an impact on the Scottish autodidactic tradition throughout the century. Tracking this legacy towards the close of the nineteenth-century, Bold finds the poets David Gray, David Wingate, Alexander Anderson, and James Young Geddes continuing the method of combining traditional and experimental techniques. She singles out Geddes as ‘the culmination of the Scottish autodidactic tradition, opening a door to the twentieth-century renaissance’.

This book is valuable for a number of reasons. It illuminates a relatively little-addressed thread running through Scottish literary achievement. The book’s examination of Hogg’s reception and literary myth-making contributes to a much-needed reassessment of his reputation and the broader implications for other writers. Criticism of Hogg has tended to address his fiction, making Bold’s in-depth analysis of his poetry very welcome. Her treatment of Hogg avoids the limitations of biographical criticism, which sometimes skews analyses of this writer, instead placing him within a context that makes broader sense of his achievement. And finally, Bold writes from both the literary critic’s and folklorist’s perspectives, resulting in a fruitful combination of approaches to a writer such as Hogg and Scottish autodidacts more generally.

Bold’s study may be viewed in light of a remarkable growth in knowledge of Hogg and increased approbation of his work over recent decades. In the last quarter of the twentieth century, scholars such as Douglas Gifford and Douglas S. Mack produced influential work on Hogg, prompting further interest. Since 1995 the Stirling/South Carolina Research Edition of the Collected Works of James Hogg, published by Edinburgh University Press, has produced 20 volumes, with 19 volumes still the works. Many critics have found an outlet in the journal Studies in Hogg and His World, and biographies of Hogg by Karl Miller and Gillian Hughes have recently appeared. At least two collections of critical essays on Hogg are being compiled by different editors. Valentina Bold’s James Hogg: A Bard of Nature’s Making may be seen as a significant addition to the new wave of Hogg scholarship.

James Hogg: A Bard of Nature’s Making (2007) is part of the series Studies in the History and Culture of Scotlandpublished by Peter Lang Publishing Group.

Posing as the ultimate Scottish Songster: James Hogg’s ‘Songs by the Ettrick Shepherd’ or Hogg GOLD!

As my work on the new edition of James Hogg’s final collection of songs comes to an end, I’m spending a while thinking about just why Hogg’s songs meant so much to him, and what purpose his hands-on involvement in the production of this volume really serves at this late point in his career. Hogg’s last little […]

In January 1831, William Blackwood published James Hogg’s Songs by the Ettrick Shepherd, a selection of 113 songs which aimed to gather together, in Hogg’s own words, his ‘best songs’. A small, hand-picked assortment drawn from a vast and varied corpus of work that spanned thirty years, this would be Hogg’s second and final song […]

Introduction: In the 1530s, John Gau was a Lutheran exile from then-Catholic Scotland living in Malmö, at that time still a Danish city. It was here that he published The Richt Vay to the Kingdom of Heuine, one of the earliest books to be written in vernacular Scots. The John Gau of Malmö Prize honours […]