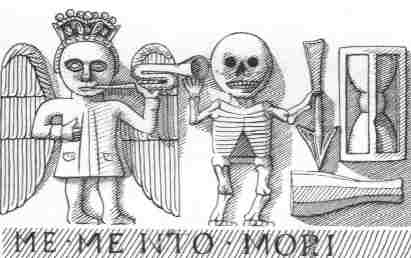 ‘The Day o Judgment’
MAIST FOWK hae, while in this warld,
Nae luve for Christ, nae lug for his law;
Mair, they misdout he will return
Tae judge them truly yin an aw.Dozent in sinnin sleep they dream,
Their heids ram-fou wi wealth an vice;
Nae thocht that at the warld’s ootgang
They’ll be debarred frae Paradise.

Not surprisingly, given Scotland’s uneasy but intense relationship with Calvinism, ministers rear their sometimes saintly, often compromised heads all over the place in the country’s literature. In fiction, think of Scott’s stickit minister Dominie Sampson – he of the ‘long, sallow visage, the goggle eyes, the huge under-jaw, which appeared not to open and shut by an act of volition, but to be dropped and hoisted up again by some complicated machinery within the inner man’; Lockhart’s Adam Blair; the Reverend Mr Wringhim, who makes such a fatal impression on Hogg’s Justified Sinner; Stevenson’s Murdoch Soulis in ‘Thrawn Janet’; Barrie’s Gavin Dishart in The Little Minister or his Adam Yestreen, the haunted minister in the novella Farewell Miss Julie Logan; John Buchan’s David Sempill, caught between faith, justice and devil-worship in Witch Wood; Grassic Gibbon’s Robert Colquhoun, torn between faith and socialism, in Cloud Howe; Robin Jenkins’s man of doubtful principle at the Disruption, George Darroch. My own novels to date are stuffed full of ministers, so many that I have declared the next one a minister-free zone – but it’s a political tale so I suspect dog-collars will not be entirely absent.

The above list doesn’t venture into either poetry or Gaelic literature, but the rest of this article does. All of the fictional ministers I’ve mentioned undergo crises of one kind or another: which leads me to think that the notion of a religious conviction never quite able to rid itself of human scepticism has a perennial appeal for writers. I think this is what drew me, a Presbyterian agnostic, to the writings of Dùghall Bochanan, or Dugald Buchanan. In particular, I became engrossed about twelve years ago in his longest poem, ‘Là a’ Bhreitheanais’, which so intrigued me that I translated it into Scots as ‘The Day o Judgment’.

Buchanan (1716-68) was born in Strathyre, the son of a miller. He left there at the age of fourteen and lived in Stirling and Edinburgh before being apprenticed to a carpenter, first in Kippen and later in Dumbarton. But he was restless and did not complete his training. After much spiritual anguish and self-doubt, he was ‘born again’ in 1744, influenced by the evangelical preaching of George Whitefield on his second visit to Scotland two year earlier.

Buchanan married in 1749 and returned to Strathyre, where he became an itinerant teacher, travelling widely through the country of Lochearnside and Breadalbane. In 1753 he was appointed to be in charge of a school established at Kinloch Rannoch by the Society in Scotland for Propagating Christian Knowledge, and was licensed as a preacher. The estate of Struan at Kinloch Rannoch had been forfeited after the ‘Forty-five, and Buchanan’s role as a teacher and catechist was specifically intended to help ‘civilise’ the district and establish Presbyterianism there.

Those poems of his which survive, eight ‘spiritual songs’, were published in 1767, the year before his death from a fever. Their recurring themes are of God’s majesty and Christ’s suffering, the comparatively fleeting nature of human earthly existence, the urgent need for repentance before judgment, and the virtuous and heroic life of the true Christian. It is likely that Buchanan had written, and destroyed, earlier secular verse.

Buchanan pondered long and hard as to the nature of God and God’s relationship with mankind. He was disturbed as a child and young man by visions of the cosmic struggle between good and evil, and of the coming day of reckoning. His diary, written in English, reveals some of his anguish: ‘Then the Lord began to visit me with terrible visions, dreams in the night, which greatly frightened me: I always dreamed that the day of judgment was come; that Christ appeared in the clouds to judge the world, that all people were gathered together before his throne; that he separated them into two companies the one on his right hand and the other on his left; and that I saw myself along with others, sentenced to the everlasting burnings. I always saw myself entering the flames, and so would instantly awake in great fear and trembling.’

If there is nothing remarkable about such intense religious anxieties, there is something special in the way Buchanan illuminates them through his poetry, particularly in ‘Là a’ Bhreitheanais’. Comprising 127 four-line stanzas, it is an astonishingly well-sustained description of the apocalypse. Derick Thomson, in his Introduction to Gaelic Poetry, writes that the obsession of Buchanan’s youth became in this poem ‘a permanent sickness of the imagination’. ‘But’, Thomson says, ‘if we set aside questions of humanity or Christianity, the exercise is brilliantly conducted.’

When I first looked at the poem I had just enough Gaelic to see the poetic imagery if not to grasp the full-strength theology, but the late Victorian English version I had to resort to seemed altogether too dull and insipid to do either justice – and so I began to toy with the idea of recasting it in Scots. At the rate of a couple of stanzas a day I worked away at it during the winter of 1996-97, and gradually the whole poem assumed a Scots shape and tone. Inevitably the richness of the Gaelic, in particular some of the assonance, is diminished, but some alliteration was gained in its place, and I also had some fun with Scots legal terminology as I worked and reworked the translation, and I also felt justified in inserting occasional anachronisms such as ‘carnyx’ for ‘trompaid’ (trumpet) and ‘bevvy-merchants’ for ‘luchd-misg’ (drunkards). If poetry is what gets lost in translation, sometimes the act of translation sounds new and interesting notes not present in the original.

There is no doubt, and no real surprise, that Buchanan is much more interested in the fate of the sinners than he is in that of the saints. Approximately one-fifth of the poem is given over to descriptions of heaven, where God invites the saved ‘like mavises amang the green’ to ‘tune up yer tungs in praise o me’, but the remaining 400-odd lines are devoted to a detailed inventory of the tortures the damned can anticipate:

These are scenes out of Hieronymus Bosch injected with 18th-century Scottish Calvinism, and they are not bonnie. Buchanan was not a lone voice in producing this kind of work – indeed, he steals with great accomplishment from the English verse of contemporaries such as Isaac Watts, Robert Blair and Edward Young – but he certainly puts his own stamp on the common themes. It’s worth remembering too that, even as the Enlightenment was pulling human imagination in quite another direction, there was a considerable fashion at this time for morbid, moralistic poetry – a trend wonderfully satirised by Robert McLellan in his play The Flouers o Edinburgh in the person of the Reverend Dr Daniel Dowie, minister of Dule, of whose poem ‘The Tomb’ Leddy Athelstane’s reported opinion is that ‘there’s naethin like it if ye want a guid greit’. Worth remembering too that Buchanan visited Edinburgh and engaged in philosophical discussions with none other than David Hume: how one would love to know the content of that conversation!

Derick Thomson concludes that Buchanan ‘makes a freer, more imaginative use of imagery than most of his contemporaries do, and he has a fine feeling for language. Despite the religious obsession one can sense a keen, orderly and even a hard intellect behind some of the poetry.’

This is very true. The subject-matter would not in itself be enough to make this poem still readable 250 years after its composition. But Buchanan’s startling display of linguistic fireworks – and his concession to the possibility that the condemned sinner might just have a point in thinking perpetual torture a somewhat disproportionate response on God’s part – keeps the reader engaged. For no fewer than 22 stanzas the sinner cries out to God, acknowledging where he has gone wrong but also (effectively in my view – but presumably this was not Buchanan’s intention) reducing God to the status of a vindictive tyrant:

Buchanan’s epic attempt to imagine the eternal damnation of the vast majority of humankind seems to me to exhibit simultaneously the power of Scottish Calvinism and its fatal flaw. All those fictional ministers I mentioned at the start of this article wrestle with the same issue, even if it is not so dramatically depicted: how do you love a God who seems to hate the overwhelming mass of the very creatures he has made in his own image? Buchanan’s poem still speaks to us about our deepest fears and hopes, and hence of a ‘second life’ that might not necessarily take place after death: in spite of its grimness, it speaks about renewal, redemption, and the possibility of being better human beings.

Thus the deep-seated pulse of our Calvinist inheritance throbs all the way through our literature, right down to contemporary writing. We may think that all that auld-time religion is irrelevant, but I suspect it still has the power to make even the most avowedly rational of us examine our consciences.

James Robertson’s translation of ‘Là a’ Bhreitheanais’, ‘The Day o Judgment’, is available as a parallel text pamphlet in Gaelic and Scots from the www.kettillonia.co.uk website.

Be sure to visit the New Publications page for details of Dr Robertson’s latest novel, The Testament of Gideon Mack.

Three of my five published novels prominently feature court scenes. The first of these, in The Fanatic, is the trial of James Mitchel in 1678 at the High Court of Justiciary for the attempted assassination of James Sharp, Archbishop of St Andrews, ten years earlier. The second, in Joseph Knight, focuses on the case of Knight v. […]