kailyard n. a kitchen-garden; a genre of sentimental Scottish literature

Kailyard literally refers to a small plot of land or kitchen-garden where cabbage (i.e. kail) and other vegetables may be grown. The word kail is recorded in Scottish sources from the late fourteenth century onwards and derives from Old Norse kál. Kailyard has been in use since at least the sixteenth century, and is attested in official documents such as the Edinburgh Testaments, e.g. ‘Ane littill hous and cailȝaird’ (1586). Widespread use of such plots of land is noted by John Sinclair in his General Report of the Agricultural State and Political Circumstances of Scotland (1814): ‘Those who work as day-labourers, in the capacity of hedgers, ditchers, dikers, village-shoemakers, tailors, wrights or joiners, and the like, have now almost universally little gardens, called kail-yards, attached to them’. 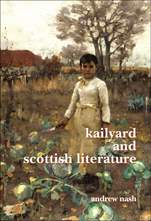 The term kailyard later became applied to a type of fiction that was popular in Scotland in the late nineteenth century. The Kailyard School produced literature that was typically sentimental in style and focused on rural domestic life, and its proponents included Ian Maclaren, S. R. Crockett and J. M. Barrie. Ian Maclaren prefaced his prose collection Beside the Bonnie Brier Bush (1894) with lines from a traditional song (There grows a bonnie brier bush in our kail-yard, etc), provoking an association between kailyards and sentimentality that would be taken up, cudgel-like, by later commentators. Writing in W. E. Henley’s New Review in 1895, J. H. Millar stated that J. M. Barrie was ‘fairly entitled to look upon himself as pars magna if not pars maxima of the kailyard movement’. There was clearly a market for this type of Scottish fiction, yet there were many who resented its romantic portrayal of an idealistic past at a time when the country was living through turbulent industrial change. The nostalgic escapism of the kailyarders, while lucrative, did not survive unchallenged. George Douglas Brown’s uncompromisingly dark portrayal of the dour Ayrshire village of Barbie in The House with the Green Shutters (1931) typifies the literary backlash that followed.

While literary genres come and go, the concept of kailyardism has not faded from the modern imagination. Since the days of J. M. Barrie and Ian Maclaren, the general use of the term has evolved to include a more comprehensive sweep of kitsch Scottishness, from sanitised versions of Burns to the White Heather Club. In 1989, a Scotsman article proclaimed that ‘The turn of the year fairly brings out the kailyard Scots from the woodwork, and we get on radio a near unadulterated diet of Scottish country dance music, pipe music and the old chestnuts of Scottish song’. Similarly, an article published in The Herald in 1996 argued that ‘Cashing in on kailyard stereotypes may be the stock in trade for shortbread firms, but selling Scotland on a grander scale, to multi-million pound investors, requires a rather different approach’.

The development of this and many other culturally significant terms is being followed closely by Scottish Language Dictionaries in the Dictionary of the Scots Language.

In this edited volume, Robert Lawson brings together scholars with diverse specialisms including phonology, syntax, lexicology and onomastics. Jennifer Smith’s Foreword sets the scene by drawing attention to the many varieties of language encountered in twenty-first century Scotland. The complex interplay of Scottish English, Scots, Gaelic and other languages presents scholars with a sometimes bewildering […]

Scots Word of the Season: Fankle

fankle v. to tangle, mix up; to become tangled; (formerly to trap, ensnare)       n. a tangle, muddle Fankle is a relatively young word in the history of Scots, first appearing in print in the poetry of Allan Ramsay in the eighteenth century. Although its older verbal uses are documented by the Dictionary of the […]

Scots Word of the Season: Quaich

quaich  n. a shallow, bowl-shaped (silver or wooden) drinking cup with two handles This is the time of year when students are graduating and prize-giving ceremonies mark the end of the academic year. Quaichs are often presented as prizes at such events, perhaps to the dux of the school. While the audience are cheering, they […]

Scots Word of the Season: ‘Sassenach’

Sassenach adj. and n. English; an English person Sassenach is derived from the Scottish Gaelic word sasunnach, literally meaning ‘Saxon’, and originally used by Gaelic speakers to refer to non-Gaelic speaking Scottish Lowlanders. Scots, after all, is descended from northern varieties of the medieval language known as Old English or Anglo-Saxon, and although Scots and English evolved into their own distinctive […]