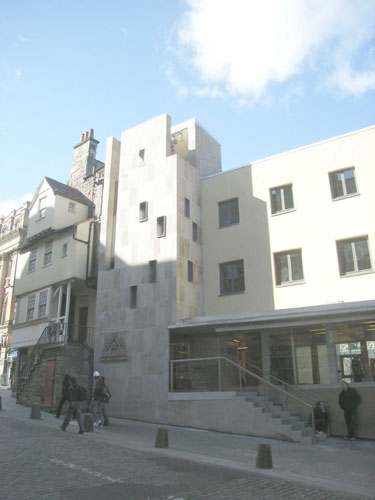 From as early as I can remember, I was aware of social and cultural differences and their linguistic expression. This is probably because my own origins and upbringing were a little complex.

Within the first ten years of life I lived in Church of Scotland manses in Edinburgh (Morningside), Glasgow (Partick) and Stirling (Bridge of Allan/Causewayhead), spent some months in Orkney and most summers in Northern Ireland.

Having begun life in Rottenrow Hospital and a Church of Scotland home in Glasgow, I was adopted (twice!) into the heart of Church of Scotland life – the manse. The manse child in the fifties was in a very interesting social position – part of the mainstream community yet also a bit different – not supposed to swear at school for example! Moreover, the manse family moved across social boundaries, being ideally a home open to all.

In my own case, I was also aware of belonging while at the same time not belonging in this family and its diverse social contexts. From aged seven I began to renew contacts with the Irish community which my birth mother had left some years before. From then on I spent part of each summer in rural County Derry.

All of this meant that Scots, in a variety of guises, was integral to my cultural formation, but also a social marker. At home in the manse we were expected to speak a very proper form of Scottish English but, in the street, playgrounds and fields, a key to being part of the community was a very rich Glaswegian or later Stirlingshire Scots. In Northern Ireland, by contrast, the same spoken language, which had a strong admixture of Scots was spoken across the community without social distinction.

As a child and young adult I registered all this socially and imaginatively; I had no concept of Scots as a cultural phenomenon or even of Scottish culture as something separate. These were the immediate worlds I had to negotiate and from an early age I was adept at gauging a social situation, shifting linguistic gear and relating to different dynamics. Due to the Irish contrasts I was also very conscious of how many aspects of our identity are a social construct.

Something similar could be said of my love for storytelling in all its forms. I was an avid consumer of stories but read, listened, acted, wrote and told with no sense of critical distinction (plus ça change … some might say!). Although I had no concept of the oral storyteller I was very fortunate in meeting many older people who played this role in their communities and I absorbed a lot from them. Again, as a manse child, I could be an assiduous visitor, providing a willing audience, and a grateful recipient of cakes and sweets! I learned early to be a listener as well as a talker. A regular diet of church attendance also fed both auditory and dramatic imaginations.

Another important factor in my sense of Scotland was the landscape. I was always an explorer and, in Glasgow, roamed freely between Byres Road and the Partick ferry. When we moved to Stirling I thought I had arrived in Eden with Allan Water, Sheriffmuir, old Stirling, Airthrey and the Ochils all on the back doorstep. Perhaps, outwith my social self, I was a loner who identified with the natural world. I certainly placed stories and traditions, music and my reading of local history in the context of the landscape. That was where they came alive and created a strong emotional attachment.

Nonetheless all this did not add up to a concept of Scottish culture at home or school. The novels of Walter Scott adorned the manse drawing room in small, leather-bound editions but no-one read them. The cult of the Burns Supper was thriving but, outwith Burns Federation recitations, no-one enquired too deeply into the poet’s life or lesser known works.

We did read Kidnapped at school but I never translated the geographical references into a sense that Stirling was on the borderland between Gaelic and Lowland Scotland. We also read Sunset Song and I identified strongly with Chris Guthrie’s sense of community, landscape and history as poetically intertwined.

It was at Edinburgh University in the seventies, studying English Literature and Classical Greek, that I became consciously interested in a distinctively Scottish cultural dimension. The big wake up call was linguistic since, from the moment the actors opened their mouths in Donald Campbell’s Widows of Clyth and Stewart Conn’s The Burning, I realised that the intimate world of my cultural formation was also part of the public culture and of literature.

That is why for the next twenty years, after I graduated and went to work at The Netherbow Arts Centre, theatre was on the front edge of my cultural activism. It was also the cause of my determination over a long struggle to right a wrong of historic repression, and place a National Theatre of Scotland at the centre of cultural life. I was very lucky to work with Bill Findlay on A History of Scottish Theatre and continue to contribute to dramatic criticism.

But there were other seeds sown in the late seventies as I moved, briefly, to New College and then to the School of Scottish Studies to do a PhD. For the first time I read systematically in Scottish literature, including history and philosophy. Moreover, I was listening in to riches of song, oral narrative and music that flowed in Scots and Gaelic through the School. In addition I was tuning in to a succession of radical thinkers – Carlyle, Ruskin, Patrick Geddes, McDiarmid, R. F. Mackenzie and, of course, Hamish Henderson – who refused to separate the cultural from the social and political.

I suspect it was their influence which tossed me back out of academic life into direct engagement. The Old Town in Edinburgh, where The Netherbow nestled, was an arena of social and cultural change. It combined a doggedly surviving Scots-speaking community, a physically rundown city centre and a historical environment of unparalleled cultural importance.

It was the perfect location for me and everything I have done since comes out of that fusion, between study and reflection on the one hand and social, environmental, cultural and political change on the other.

Among the things I became involved in were the restoration/renewal of the Old Town, the reinterpretation of Scottish cultural heritage (not least in John Knox House), support for playwrights, the formation of the Scottish Storytelling Centre to galvanise oral traditions in contemporary contexts, the culture-religion interface, and the rapid growth of a Scottish literary culture. Meanwhile, history literally passed up and down the street as we witnessed Mrs Thatcher’s state visits, the return of the Stone, the restoration of the Scottish Parliament and the new Parliament building! I tried to catch some of the moment in my Storytelling Scotland: A Nation in Narrative (2001).

Fortunately the new Scottish Storytelling Centre building was completed with marginally less fuss than the Parliament. It now provides a high quality focus for traditional and contemporary storytellers, as well as a literary venue of excellence. The national storytelling Network, which is headquartered here, embraces storytellers, teachers, librarians, curators, environmental rangers, care workers and animateurs. There is also a “Literature Quarter” feel with our neighbours including Scottish Book Trust, the Saltire Society, City of Literature Trust, and the Scottish Poetry Library in the Canongate. Then there is that other storytelling centre at Holyrood, to which our Literature Forum commitments require regular visits!

It has been a hectic few years – or is it decades? – but perhaps my personal pendulum is swinging back to reflective mode. Last year I published a novel, The English Spy, which is set in the Old Town in 1706-07; and my second, Between Ourselves, comes out at the start of 2009. I have recently completed a study of Burns and religion, God, the Poet and the Devil, which will be published soon. Currently I am enjoying watching Kidnapped and Jekyll & Hyde, my adaptations for live performance, finding new audiences for classic texts.

The past keeps coming at you in new waves, pretending to be the future! What comes next I am not sure but hopefully I won’t go under – yet!

Between 2001-07 Dr Smith was the first Chair of the Literature Forum for Scotland, and continues to chair its Literature and Education Task Group.

The English Spy and Other Factions

The English Spy is one of a quartet of novels focussing on critical turning points in Scottish history, as a way of reflecting on continuing political and cultural change in the present. The English Spy (2007) was the first written and published, but the historical sequence is: Ballad of the Five Marys (2013), The English Spy, Flora McIvor and Between Ourselves (2009); focussing respectively on […]