Scots is now on a UNESCO list of endangered languages and it was Scotland’s education system that put it there.

Although done with the best of intentions, the campaign to force Scottish children to speak only English in order to get on in life has almost killed the Scots language. And this suppression of the mother tongue of millions of people has had a devastating impact on the self-confidence and general literacy skills of many Scots.

It has been demonstrated recently that Scots has an important role to play alongside English in education when the language is accepted as a part of the life of a school. Pupils whose mother tongue is Scots are more willing to engage in reading and writing when given greater opportunities to express themselves in their own language.

Yet in spite of this, it is still absolutely normal in Scottish schools to exclude entirely the Scots language and its literature from the learning experiences of Scotland’s children. This year alone, a Scottish high school instituted a policy of punishing pupils who use Scots in class and an official survey of public attitudes revealed that most Scottish people regard Scots as ‘slang’. In January, a Scottish newsreader proudly declared on television that he couldn’t understand a word of Burns. It would seem that Scotland has become a country where it is permissible and standard for a person to be ignorant of their own culture. If such wilful stupidity continues to go unchallenged, the Scottish nation will inevitably kill off Scots and lose forever the ability to read, understand and enjoy its own literature written in that language.

But these patently shameful facts should not surprise anyone. Most teachers delivering courses on language and literature to children today were once pupils themselves in schools where Scots was despised. Therefore English teachers in the modern Scottish classroom will invariably choose Shakespeare over Dunbar, Henryson or Lindsay (study of a Shakespeare play is an actual requirement) and Carol Ann Duffy before Kathleen Jamie, Bill Herbert or Janet Paisley. They will even prefer to take on Edwin Morgan’s Mercurian language in The First Men on Mercury and never look at his vibrant Scots language translations of Cyrano de Bergerac or Mayakovsky’s poetry. They do this because the state has offered them neither the training or resources necessary to teach Scots in schools.

In 2002, James Robertson and I founded Itchy Coo, a Scots language education project funded by the Scottish Arts Council whose aim was to provide Scotland’s teachers with the books and guidance they would need to teach Scots to the next generation of young people. 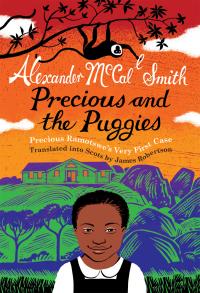 To date, we have published 35 titles which include the Katie’s Coo & Katie’s Moose series for readers aged 0–5, A Wee Book o Fairy Tales in Scots, the King o the Midden poetry anthology, the Tam o Shanter’s Big Night Oot collection of plays for early secondary and The Smoky Smirr o Rain, a major Scots literature resource for senior secondary. Several Itchy Coo books have been bestsellers especially the popular translations of Roald Dahl novels, namely The Eejits, Geordie’s Mingin Medicine and The Sleekit Mr Tod. And Itchy Coo’s latest publication, Precious and the Puggies, was a ringing endorsement of the Scots language by one of the world’s most respected authors. Alexander McCall Smith kindly granted Itchy Coo the right to translate the first story from the childhood of his famous character, Precious Ramotswe, into Scots and agreed that a year should pass before the story can be published in any language other than Scots.

With sales now in excess of a quarter of a million books, the Itchy Coo project has made Scots available to a new generation of Scottish children who would otherwise have had very few opportunities to read in their own language.

In addition, Itchy Coo has provided in-service training on the Scots language to teachers, delivering over 500 Continuing Professional Development sessions in almost every local authority in the country. One of its major successes has been the creation of the Falkirk Scots Coordinators group where a dozen teachers are now delivering Scots CPD to colleagues across their local authority with the full backing of their Director of Education. Falkirk is the only authority in Scotland that has a core of experienced Scots language trainers and it is hoped that other authorities will emulate this excellent example of good practice.

And since 2002 through its extensive outreach programme, Itchy Coo has advised on a government Audit and Ministerial Working Group on Scots and even made the case for Scots at Tartan Week and at the United Nations in New York. But it was our campaign for the eleventh-hour inclusion of the Scots language to Curriculum for Excellence in 2007 which we count as one of our greatest achievements. At a time when it seemed that Scots was to be excluded from the new curriculum, the Itchy Coo team wrote letters and e-mails, met civil servants and MSPs and raised a stoor of protest from teaching staff all over Scotland. The addition of Scots to Curriculum for Excellence was crucial to the survival of the language in education and it simply would not have happened without Itchy Coo.

There is now a Module on the Scots language available on the Learning & Teaching Scotland website. And an influential Parliamentary Cross Party Group is currently working hard to raise awareness among MSPs of good practice with the Scots language in education.

As a result of the efforts of two writers, more children and teachers are aware of the Scots language than at any point in the last hundred years but Itchy Coo has done this with very meagre resources and at great personal cost.

What is required now is for national and local government to break the habit of a lifetime and begin to take Scots language seriously. At the very least, they should give consideration to a plan for Scots Language in Education similar to the National Plan for Gaelic.

If Scotland continues to hold these old-fashioned prejudices against Scots, we will simply continue to damage the developing linguistic confidence of those thousands of children who bring their Scots language to school. And if language is the greatest achievement of the human race, then to diminish the Scots language as ‘slang’ or as something of no value diminishes us all not just as Scots but as human beings as well.