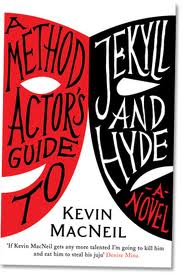 Kevin MacNeil’s debut collection of poems Love and Zen in the Outer Hebrides (1998) established him as an important new voice, at once profoundly rooted in the culture of his native Lewis as well as internationalist in his influences. In Love and Zen he showed a willingness to experiment with the possibilities of poetic form, combining Gaelic and English with Eastern philosophy and koan-like aphorism. It takes a very cynical reader indeed not to be delighted, for example, by the short poem ‘A.M.’, in which MacNeil rhymes ‘Dè mun a tha thu?‘ (‘how are you?’) with ‘Dharmadhatu‘, which he glosses as a term used to describe the universe as perceived by the enlightened, ‘often imagined as a myriad of sparkling jewels.’

MacNeil has carried over this formal and linguistic playfulness into his subsequent novels, The Stornoway Way (2005) and now A Method Actor’s Guide to Jekyll and Hyde (Polygon, 2010). In both, MacNeil redeploys narrative devices used by earlier Scottish writers. The Stornoway Way contains an introduction and postscript by ‘Kevin MacNeil’, who is in possession of an inherited manuscript in the manner of James Hogg’s editor in The Private Memoirs and Confessions of Justified Sinner (1824). Indicating a continued obsession with ambiguity and duality, A Method Actor’s Guide to Jekyll and Hyde wears its influences rather more blatantly.

Describing itself as a ‘dark comic thriller’, MacNeil’s novel concerns Robert Lewis, egotistical actor, who is in rehearsals for the lead role(s) of a stage adaptation of Stevenson’s novella. While crossing Edinburgh on his bicycle, Lewis is involved in a traffic accident, following which his grip on reality (or reality’s grip on him) begins to slide. As his career and budding relationship with Juliette deteriorates so too does his mental state, culminating in sinister changes in personality and malignant thoughts. Lewis’ unreliable narrations are dark yet extremely funny. In a sequence where he imagines himself addressing a rapt and appreciative audience, Lewis’s hyperbolic verbiage is milked for full comic effect as he describes his meeting with a lover as ‘a chance collision of two dust-mites in a bed on a night of movement and small consequence.’ Waking late on his couch, Lewis is ‘a horizontal Hamlet. The Olivier of oblivion.’

While MacNeil makes fun of the egotistical impulses of the actors involved with the production, his approach never really crystallises as satire because the emphasis is so often upon wordplay and the use of jokes that the characters are never fully drawn enough that one can enjoy their being mocked. Indeed, the allusions to Stevenson’s original similarly rely upon puns, jokes and a nod-and-wink approach which, while highly entertaining, also feels rather overdone. MacNeil delivers allusive jokes at roughly the same rate as a stand up’s punchlines. Edinburgh is ‘a wicked place to live’, while Lewis is ‘in two minds’; his nemesis Woolfe has a servant called Poole (as does Stevenson’s Jekyll), while Lewis sees cloaked figures on CCTV and is advised to ‘watch your back with both faces.’ Throughout his narrative, the ‘Hydeous’ Lewis travels through a misty Edinburgh in which the streetlamps are ‘consoling like lighthouses.’ MacNeil invests so much of his time on the narrative voice’s allusions and digressions that psychological and emotional depth suffers.

The novel is rather unbalanced in this way. This is a comic novel, but in order to laugh at (or even with) Lewis, a reader must be able to invest in him in the first place. Here, though, the relentlessly playful narrative distracts one from any kind of felt relationship with the character. There is no space left for psychological complexity or empathy with the actor’s situation. A generous reading could perhaps allow for this kind of distraction as a facet of Lewis’ egotistical but stereotypically vulnerable character: he’s all talk.

However, the novel possesses a second narrative voice in its latter stages which is much more nuanced, meditative, serious even, and whose rather more fully realised protagonist serves to draw attention to the flimsy nature of characterisation in the first two thirds of the book. Julie’s narrative, much shorter than Robert’s, documents her visits to the hospital bed of a cyclist in a coma following a road traffic accident. Julie begins to understand her unconscious lover by reading his books on Zen Buddhism, as well as The Strange Case of Dr Jekyll and Mr Hyde, which her lover has been adapting for a stage production. She begins to write to him, feeling that in doing so ‘I was connecting with him on some level, or at least trying to.’ During her visits, Julie’s various tiny behaviours are echoes of more magnified details from Robert’s narrative: the smell of cheese and onion crisps on somebody’s breath, a kiss which ends in a playful bite to the lip. Robert Lewis, it seems, is a character in the mind of Mac, a playwright in a coma following a cycling accident. Are we to believe that the lion’s share of the book is merely a dream?

This would appear to be the intention. Like Bobby Ewing in the shower, the cyclist awakes. Unlike his 1980s Dallas predecessor, however, this character begins a process of redemption until he achieves a state of equilibrium, his ego in check and duality conquered: ‘one essence made and moves us all, and this, I realised, is the life that is.’ The dramatic change of gears between Robert’s and Julie’s narratives makes the final section rather hard to take, and this is a shame because the writing in the novel is so extraordinarily good.

MacNeil is an energetic and entertaining writer, with his poet’s gift for fashioning exactly the right image. Disco lights on a dancefloor are like a ‘bombed rainbow’. The luvvy director’s hands are described ‘flapping like manacled doves.’ MacNeil’s writing is concerned with play, with detail, with allusion and pun, but these are delivered with such pace and constancy that character and plot remain somewhat secondary to style and exuberance.

I grew up in a small village east of Inverness, where the principal employers were the local army barracks (an 18th century edifice built to prevent a rematch of the ’45) and an American-owned oil rig construction yard. These colonies of varying sorts constantly underlined the way wider forces impinge on the local, from the […]