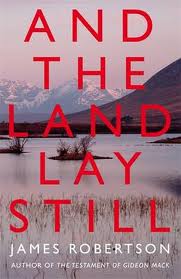 James Robertson’s fourth novel is truly a magnum opus, in ambition as well as execution. It is reminiscent of Salman Rushdie’s great novel, Midnight’s Children, in that both attempt to document the casting off of the British imperial era via fiction, beginning with that key year of 1947, while technically, with so much ground to cover, both do more telling than showing, summarising events as opposed to unfolding them dramatically. Both also employ the device of suddenly panning out from character close-up to inform the reader of what is happening in the bigger (real) world—confirming the sense that, ‘beyond the door, history calls’.1 But whereas Rushdie makes light use of this device, narrated via a faulty, even cranky perspective calling into question the very nature of our accounts of the past, in And the Land Lay Still (Hamish Hamilton, 2010) this historiography is proportionately much greater, and sometimes offered to the reader by an authoritative, non-characterised voice which doesn’t appear to emanate from within the diegesis. This contrasts with the narrative voice in general, which moulds easily to the world of the characters, and at times becomes a very natural, if gentle, form of spoken Scots, not unlike Grassic Gibbon’s.

However, despite their similarities, Robertson’s can’t strictly be termed ‘epic’ as Rushdie’s may. It lacks that classic (mock) heroic figure whose destiny it is to make history happen, (as Saleem Sinai’s admittedly self-deluding centrality affects the post-independence fortunes of India and Pakistan). Instead, Robertson’s 671 pages are organised in something akin to symphonic structure, with five main movements and a shorter coda—themes and motifs introduced in the opening section are subsequently developed and explored, as characters come and go accordingly. Robertson’s ‘nexus’, Michael Pendreich, if he can be termed key in what is a sprawling matrix of subtle connectivity, features surprisingly little between the opening movement and the last. Aside from the fact that he is gay, he is quite ‘mediocre’ in the ‘middle of the road’ sense of the word as used by Georg Lukács to describe those heroes employed by Walter Scott: ‘principal figures such as may, through character and fortune, enter into human contact with both camps’.2 In Pendreich’s world, there are more than two camps, but he has access to all. Educated privately amongst the Scottish Tory establishment, drawn—albeit fairly mildly—to the Nationalist cause, but in a long-term relationship with a grassroots Labour politician, he is able to navigate the post-war Scottish political scene to good effect.3

In another sense, Michael is also ‘mediocre’, as the photographer son of a much more famous one—Angus—and at the start of the book, set in his father’s old retreat on the north coast of Scotland where Michael has found a local lover, we find him struggling with the task of writing an introduction to the catalogue of a major retrospective of his dead father’s work. By going to see one of Angus’s former lovers in search of assistance, Michael sets off a process of reminiscence—partly of his own youth in Doune and boarding school days, but also of the highly political era in Scotland’s story which Angus’s photographs document. The woman in question, Jean Barbour, has presided over years of foment from her Edinburgh flat, a key ‘Folk Revival’ haunt through which hundreds, if not thousands, have passed—including the impressionable Michael, in his student years.

The photographic images suggest memories, and certain figures in the frames become focal in the novel as it progresses. One, a tramp captured at Dounreay in 1964, haunts the whole book—each of the six sections is introduced by a short, lyrical, italicised passage written in the second person, and the reader gradually realises that these are the thoughts of this wanderer, who has the habit of picking up stones as he travels and giving them to random people he encounters. One such recipient was the boy Michael himself, at the time when the photograph was taken, just before his parents separated. In the second ‘movement’ of the novel, we learn something of the wanderer’s life in a mining village before he took to the road, leaving his wife and young daughter behind—he is Jack, a soldier deeply traumatised by his war experience and a fierce Scottish nationalist, who was befriended by a neighbour, a young socialist highly hopeful in the wake of the 1947 election—Don Lennie, coincidentally another of Angus Pendreich’s subjects, for whom Jack’s disappearance remains a recurrent mystery throughout the novel.

The third section, ‘The Original Mr Bond’, tells the tale of this tramp’s nephew, James ‘Peter’ Bond, who is briefly introduced as a boy in the second. This is perhaps the most substantial and impressive section of the novel, offering a brilliant account of the partial rise of a lad o pairts in the secret services in London before he is summarily dumped back in Scotland, and asked to keep an eye on the political melting pot, and the rise of the ‘Nats’. This section contains a technical invention which is genuinely impressive, and in this Bond’s interaction with such as Hugh MacDiarmid and Major Boothby, Robertson’s fiction connects powerfully with the political reality of 1970s Scotland. Bond’s subsequent existence as a PI amongst the detritus of a covert life in Leith with his mysterious contact, the deracinated imperial Scot, Croick, is truly gripping and very well-realised—and Bond has his part to play in the denouement.

Sections four and five of the novel feature new threads, tightly interwoven with the ongoing, including the stories of the female cousin of Michael’s gay partner, a writer, Ellen; of the toff and Tory MP with whom Michael had his first ‘coming out’ encounter—whose sister Lucy will later give ‘the original Mr Bond’ the salacious detail that brings about her brother’s downfall; and of the family of Don Lennie, whose two sons go off in very different directions. As even more new characters are introduced, the integrity of the novel threatens to unravel, yet Robertson manages his complicated task with great skill for the most part.

In the final, shorter section, set at the opening of Angus Pendreich’s exhibition, these threads are finally knotted—by and large. Those figures featured in the photos have been invited—Michael is at last able to pin an identity on the tramp of Dounreay, and, one feels, to lay to rest the ghost of his father. The subtle web which connects the many characters is untangled—to some degree—with Michael experiencing a sense of achievement and hope, burgeoned by the softening of his Highland lover.

Much of the history recounted in And The Land Lay Still is familiar territory to those Scots who have lived through the era, to whom, without the unique spin of a narrating personality such as Rushdie’s Saleem, it may seem unnecessary. But perhaps the key issue is the matter of audience: this is a book, published in London, whose target readership will certainly include many who have little or no grasp of Scotland’s particular passage from World War II to the end of the century—as such, it is almost an apologia for Scotland’s disaffection from the Union, and this breadth of scope may well be very important to future readers even in Scotland itself, who may have a similar lack of context for the web of stories Robertson tells. History itself will be the judge, perhaps, of his history. Yet it cannot be said to be the full Scottish story of the period, for despite the opening scene on the Highland coast, the focus is almost exclusively on the Central Belt and although it is mentioned in passing, little is made of perhaps the single-most dynamic socio-economic shift of the era—the coming of North Sea oil, the huge transformation this brought to the north of Scotland directly, and the rest of the country indirectly. Though the key symbol of the Dounreay nuclear plant, as a failed hope for the future, is effectively positioned and so establishes the conceptual reach of the novel, those parts of Scotland to the north of the Highland Line do not really feature in And The Land Lay Still, yet this northern transformation was every bit as far-reaching as the loss of the heavy industries in the south during the same period.

But this is to criticise the novel for something which it does not set out to do, and even without this aspect, it is still a huge canvas and a great achievement for both its author and his country, in creating for the reader in such a subtle and complex way what Rushdie calls ‘the illusion that … the past exists’.4

3 It is worth noting, perhaps, that Robertson’s thesis, though in the field of History, was on the novels of Scott.

‘To Be Continued …’ by James Robertson

Douglas Findhorn Elder is on the top floor of a bus in Edinburgh when we first meet him; it is four weeks after the Scottish referendum and he has just turned fifty. Douglas is an ex-newspaper man, newly single and in need of an adventure. So far so ordinary: Douglas attends a colleague’s funeral, gets […]

‘The Professor of Truth’ by James Robertson

Readers familiar with James Robertson’s work will find The Professor of Truth resonating with the major leitmotifs and themes of his previous novels—(historical) truth and its complex relation with story-telling, (poetic) justice and the role of literature in securing memory and providing a critical review of the past, the healing power of literary representation in […]