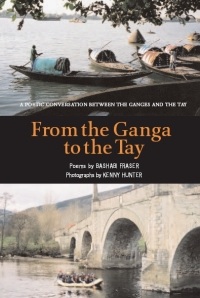 The notion that creativity has an intimate, secret connection to water has long nurtured the poetry of South Asia and Northern Europe. Accounts of the legendary origins of the River Ganges are well-known and rivers have featured in the writings of Rabindranath Tagore, Arvind Krishna Mehrota, Bhartrihari, and Keki Daruwalla, among others. In Scotland, a tradition fed by William Drummond, Robert Burns, Walter Scott, and James Hogg has, more recently, issued in contemporary river poems from the likes of Valerie Gillies, Gavin Bowd, and Colin Donati. Now poet Bashabi Fraser and photographer Kenny Munro have teamed up to produce an illustrated “epic poem” in the form of a conversation between two much-celebrated watercourses: the mighty Ganga (Ganges) of India and the “silvery Tay” of Scotland. Besides their storied literary heritage, Fraser reminds us, these geographical features have much in common: each is the longest river in its respective country; each flows in the same direction, from west to east; moreover, each is connected by the history of the British Empire in India, specifically Scots involvement in the jute trade that once directly linked jute plantations by the Ganga with sweatshop factories in Victorian Dundee in a “golden skein,” that, in Fraser’s words, “wove the nations through years of industrial exchange and interdependence” (p.11).

That exchange was initiated by the British East India Company, which shipped its first cargo of jute fibre back to Britain in 1793 and was fuelled in the 1830s when Dundee spinners mastered the technique of spinning the fibre on power-driven machinery. Soon, the bright green rice paddies that had formerly lined the Ganges and provided food for millions were being turned over to the cultivation of the yellow chochorus plant, and the bungalows and palaces of the managers and so-called Barons of the jute trade dotted the banks of the river. By the end of the nineteenth century, however, Kolkata (formerly Calcutta) had outpaced Dundee as a manufacturing centre; Indian independence in 1947 completed the process and the Dundee power looms finally fell silent. The results of this early phase of imperial trade included phenomena familiar in our own era of globalization: concentrations of great wealth and great poverty; industrial success and industrial decline; and, in the Bengal famine of 1943, a man-made disaster. Still, as Fraser argues, it also led to the forging of more positive cultural ties between India and Scotland. Valued exchanges cited in the book range from the work of Scots town-planner Patrick Geddes the humane and ecologically forward town-planner of Bombay (now Mumbai), to the arrival in Scotland of Bangladeshi, Indian, and Pakistani immigrants. In one passage, the Ganga commemorates “a photograph / of sahibs in suits— / all graduates of Dundee / in a reunion / banquet. / And if you / look closely / at the black and white / shot, you’ll see / they are all Indians / hopeful and bright / —a right jovial lot!” (p.39). Moreover, as Fraser makes clear in a brief Preface, her own Indian family history is threaded with comparable themes; her grandfather’s education was funded by “a Scots sahib” and her parents, both academics, forged personal friendships that eventually drew their daughter to Edinburgh University, a doctorate on Patrick Geddes, and marriage to Scotsman Neil Fraser. This epic poem of borders crossed, one gathers, is also something of a personal story, an important attempt to voice transnational experience by processing history.

The poem itself takes pleasingly concrete form, meandering across the page in a series of riverine curves. Munro’s color photographs are featured on the edges of the text. Sometimes, they refer immediately to written passages; at other moments, the relationship is more tangential (as in, for example, the photographs of Pictish aquatic designs that accompany the poem’s discussion of contemporary over-fishing). The point, of course, is dialogue�between word and image, between India and Scotland, and between past and present. The Ganga and the Tay talk—and talk, discussing everything from their mythic origins, to varieties of twilight and rain, to their shared fears of nuclear war and environmental catastrophe. Associations between rivers and the sacred, an idea important to Munro, are compared: the Tay tells how humans have built

but envies the more intense spiritual feeling invested in the Ganga by the millions who come to bathe in her holy waters; the Ganga picks up the theme and, borrowing from the Scottish river’s language agrees: “aye, my people / come in swarms / like summer bees / drawn by promises / of warmth and wealth” (p.20). Rivers can, of course, as the world has recently seen, wreak terrible destruction too and the Ganga is candid about her ability to destroy (“I cause havoc / I cause pain / I send shocks”); concurrently, the Tay celebrates the power of rivers over “an unresisting / landmass / which we erode” (p. 20, 22). Yet, Fraser is most concerned with what humans do to river environments. “As the daughter of geographers,” she writes in her “Preface,” “I know that it is almost suicidal to play with rivers” (p.11) and she is as passionate in its indictment of human failures (pollution, over-fishing, the building of big dams) as she is enthusiastic about activities devoted to sustainability (from the work of the Ganga Development Scheme to the attempts of the Scottish government to save the Tay’s salmon).

From the Ganga to the Tay is a slim but big-hearted book that takes on important subjects; it’s a worthwhile read. Still, it’s not without flaws. In its less successful moments, the poem can sink into a kind of clotted prose with line-breaks: “I am utterly / committed to / my role— / ignoring my importunate / rivals, / heeding instead / imploring and unfortunate / mortals,” the Ganga remarks, sounding as if she is running for office. (18) At other moments, Fraser allows herself rhymes that edge towards the pat: “They call me the Tay. / The truth / is, I too have a bay” (16). Moreover, while the interaction between text and image is fresh and interesting, this reader at least would have enjoyed seeing some of the photographs in a larger format. From the Ganga to the Tay speaks to a history that is still being made; long may the conversation continue.

From the Ganga to the Tay: An Epic Poem by Bashabi Fraser is published by Luath Press (2009).

From the Vibrant Margin

Literary Journals at the Scottish Writing Exhibition, Philadelphia 2006 It is an open secret that the official text of “literature” is produced in the margins of culture. What Jerome Rothenberg has said of American poetry could equally be said of Scottish writing: “the mainstream of [Scotland’s literature], the part by which it has been & […]