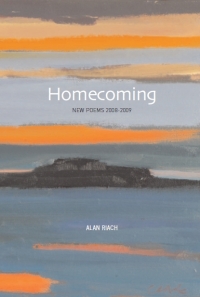 Readers acquainted with Alan Riach’s earlier books of poetry (This Folding Map, An Open Return, First and Last Songs, Clearances) will assume, rightly, from the title of this his fifth, and best volume, that they are back on familiar territory. Leaving home, separation, return, distance, loss, are perennial themes in Riach’s work, adding to the vocabulary of displacement which has dominated so much of late twentieth, early twenty-first century literature.

But Riach is not, in the literal sense, a poet of the Scottish disapora. His poetry speaks of the home you carry within you, no matter where in the world you happen to find yourself. In this particular volume the places where the poet discovers new definitions of home range from New Zealand to China, with stops in Mexico, Finland, Switzerland, Turkey, Wales, Ireland and England along the way. What these poems illuminate most eloquently is not exile but return, be it the return of the dead in the form of the words they have left behind, or the ghosts who inhabit their particular landscapes, or a return of the voyager to the land of his birth. ‘Home is what you leave,’ Riach tells us in his entertaining Introduction. ‘Loneliness is part of the story’ but only part. Once a way to return is found, loneliness disperses. ‘For home is a deal made with midnight, something signed, sealed and promised before you were born.’

What is immediately striking about these poems is their generosity of spirit, coupled with a complete lack of sentimentality. The poet’s longing for his homeland, and the joys of recognition on his return, are represented in language as concrete as the Great Wall of China, which Riach visited in 2004. ‘Only when I am here,’ his Chinese guide tells him, ‘do I feel the greatness of my ancestors’. It is a moment of identification for Riach who, elsewhere in this volume, writes movingly of the ‘ancestors’ who shaped him: his father; his grandparents; his literary mentors, from Burns to Edwin Morgan; the men, William Wallace in particular, who spoke in deeds and words for the ‘People of Scotland, now’.

‘Why do you want to go back and live in Scotland?’ a friend (quoted in the Introduction) asks Riach, as he is about to leave New Zealand, the country that had been his ‘home’ for fourteen years. ‘Because of the way people speak there,’ was his answer. So it is perhaps not surprising that he feels moved to re-write both the opening of Hamlet, and Pushkin’s poem, ‘Evil Spirits’, in the vernacular, a flight of fancy which aroused, in this reader, a latent sympathy for the questioner in ‘The Interview at St Andrew’s’. When the interviewee in this poem declares his intention, should he get the job he’s applying for, of making St Andrews ‘the centre/ the hub and the hold/ of Scotland, our literature,/ all to be told’ the interviewer explodes. ‘Oh dear, dear, dear, dear!/ Dear boy, can’t you see?/ There are English girls taught here!/That can never be.’

Riach’s sense of humour, given free rein in this poem, brings a touch of spice (veering at times on anger) to the collection. His poem titled ‘The Review or, I won’t facilitate Vicky today’ is a hilarious exposure of the current bureaucratic approach to university teaching. ‘You’re going to undergo/ a review of yourself’, the poem begins. ‘It’s like,/ make a small clone, on a petri dish,/ but don’t grow the head/ or the limbs or the torso.’

Humour aside, these are serious poems, concerned with matters of place and belonging, and the centrality of the arts to a nation’s understanding of itself. There is much talk of borders, the borders between countries, between land and sea, between the past and the present, and between people. The challenge Riach has set for himself in this collection is how to collapse these borders, to turn absence into presence, distance into proximity, loneliness into connection. ‘I am alone again,’ Riach writes in one of the poems in his moving sequence about Elgar. ‘When you do love and live with one so dearly, so close/ your trust becomes connected over year upon year,/ whatever the absences are, the gulfs.’ This lament for a dead wife becomes, in the following poem, a celebration of ‘the place called remembering’. ‘For as certain as I am that I am here now,/ so you shall hear me once again, someday…’

Connection, memory, recognition—these are the touchstones by which Riach measures experience. In ‘The Mother Speaks to her Son’ , one of the collection of poems written as a result of the poet’s time in China, a mother laments her son’s failure, when he returns from the city to his home village, to tell her anything about his new life. ‘You walk among your people once again at the turn of the year/ and you will not speak to me of your life away from here.’ Yet, in the poem’s concluding line her love is described as ‘undiminished, though you are a stranger to me now.’ What in another poet might have been presented as a tragic failure in communication, in Riach’s generous view becomes proof of the human instinct, when love and not dogma is the engine, to collapse boundaries.

In other poems boundaries are collapsed by the sheer force of the poet’s longing: ‘It’s only that you are not here/ that makes the virtues, and the facts of all you are seem, wishfully, near.’ is the concluding stanza of, ‘Love poem: missing you’ the first of a group of five poems written as result of the poet’s visit to Istanbul. The second in the series—’Chilling out in the breeze in Zekeriyakoy’—concludes with the lines ‘there will be one simple dive/ that takes us into a blue light/ under the surface again, relaxed, not/ East nor West but deep in the silent centre…’ collapsing, in one vivid image, the boundaries between water and air, land and sea, East and West.

If occasionally I asked myself if what I was reading was truly a poem—’Mission Impossible: Sherlock Holmes and Dr Watson’ being a case in point—not for a moment did I experience any loss of interest. The more I read the greater the urge to return to the earlier poems. The last line of his poem honouring the poet Adrian Mitchell (‘He’s dead just now. Aye. He’s dead just now’) asks that the book will ‘keep the conversation going.’ Alan Riach is very much alive, and will, I hope, ‘keep the conversation going’ for many decades to come.

Homecoming by Alan Riach is published by Luath Press, 2009.

‘Arts and the Nation’ by Alan Riach, with Alexander Moffat and John Purser

For the late Paul Virilio, speed was king in the modern world. The French sociologist contended that technology had outstripped the ability of politicians to legislate or to govern, such that democracy has now effectively been superseded by ‘dromocracy’ – the reign of speed. One only has to think of the new media that have […]