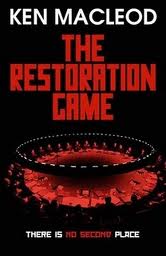 Miavaig, in Uig, on Lewis, is a scatter of houses—and three churches—across a convergence of hillsides around the place where a short burn connects a loch with a sea-loch. In the culvert where the burn passes under the road lives a black eel, that was a good eighteen inches long when I first saw it. (And when it saw me—I remember the cold thrill, a new experience then, when its eyes looked back.) It or its replacement—the wee burn, a hundred yards long and a few inches deep, was wriggling with elvers—may be longer now. I don’t know. I’ve never been back to look, except in dreams.

Around Uig you can find deep, dark glens and wide sandy beaches. There are traces everywhere of a more populous past: the old drove roads snaking across the hills, the roofless rectangles of black houses, the drystone walls under green mounds of moss and turf. It’s like growing up in a single enormous ruin that compasses all you see, and includes, in a child’s imagination, the rusting carcasses of cars and buses on the moors, the pools of a tidal fish-trap locally attributed to the Vikings, and the brochs and standing stones far away. Above it all were installations of a present guarding against a possible future: the radio mast on a hilltop, the big radar dish revolving black against the sky at the headland of Aird, overlooking the angular concrete blocks of the RAF base.

I lived in Miavaig until I was ten, and then we moved to Greenock, on the Clyde. For summer holidays we always went to Lochcarron, in Wester Ross. The contrast between Uig and Lochcarron was, to me at the time, stark. Lochcarron had far more, and far taller and more various, trees. Some hillsides around it were forested (in Miavaig, a stand of a few spindly pines was called ‘the plantation’). Its gardens were lush and sprouted exotica—clumps of pampas grass, endless rhododendrons, monkey-puzzle trees. Fires burned wood and coal, not peat. Most people spoke English in everyday life. The hills were higher and the loch was wide and deep.

Across that loch and to the west lay Plockton, a village on a sheltered shore, whose surroundings were lusher even than Lochcarron’s: calm waters, green glens and slopes, numerous islets bearing stands of Scots pine, the whole aspect a sight-line for red-and-black sunsets whenever the rain isn’t marching in from the west. A short drive south, and up, and you’re on the bleak rocky moors of Duirinish and Balmacara, the shadows purple with heather in the late summer.

On these landscapes of early memory I’ve inflicted science fiction. Made them the battlefields of wars both guerilla and global. Crashed flying saucers and tactical nukes into them. Crushed them under the mechanical sprawl of runaway artificial intelligences. Choked them with mutant jungles. Made their sea-lochs ring with the din of spaceship yards. Settled their villages with ageless retirees scoffing illegal life-extension drugs. Carpeted their roofs and walls with thick insulation against the big freeze as the Gulf Stream downshifts. And, on the plus side, expanded their villages into thriving industrial towns, repopulating the glens as the Brahan Seer foretold. I’ve even let the Press and Journal soldier on, through wars and revolutions and across the collapse and rebuilding of civilization, into a future several centuries hence.

I haven’t spared the urban landscapes I’ve lived in either. Turned Greenock into a vast naval base, Edinburgh into a dark haunt of terrorists and robots, Waverley Station into the target of a cruise missile strike, Glasgow into a civil war zone, the Clyde into a string of crater lochs, the Firth of Forth into a frontier in a fragmented Britain, and both of the Forth’s great bridges into mangled wreckage. But again on the plus side, I’ve also imagined these cities enduring, Edinburgh reinvent itself as a biotechnology capital, West Lothian flourish as Carbon Glen, and the University of Glasgow sail on through dark centuries as an ark of reason, which one of the characters hails as the Church of Man.

In Sin Bio, the novel I’m writing at the moment, I again revisit Lewis—and indeed Miavaig, though not under that name. All I’ve done to it so far is marred its every horizon with wind-farms, and opened what may be a time portal under a hill, but I plot a lot more harm to the place as the book goes on.

This talk about damage is, of course, a joke. You can’t really hurt a place by using it as a setting for fiction, no matter how dark the tale. Quite the contrary. The real life of a place is added to if it’s lived in imagination, including in the imaginations of people who’ve never been there. This seems plain enough for mainstream fiction—Greenock has never looked finer than it does in A Green Tree in Gedde, and Edinburgh’s sense of itself (never knowingly undersold, as the John Lewis advertising boast goes) has gained even in tourism revenue from its many grim phantoms from Deacon Brodie to DI Rebus—but science fiction can add an extra shiver of significance by saying of a place: the future will happen here, too. In an age of increasingly metropolitan media focus, it’s easy to accept that Paris, London, New York and all the other cities so readily evoked by their recognisable skylines in disaster movies and in technothrillers should have their place in imagined futures. But other towns and villages and open spaces will still be there, and deserve their piece of the action as part of our futures. Even futures that didn’t happen. Without the Martians, who would have heard of Woking? Today, maybe in grateful civic recognition of this, Wells’s alien invaders are memorialised by a fine steel statue of a Fighting Machine looming over the pedestrian precinct in the town centre.

So … no apologies to the city fathers, the toon cooncillors, or even the inhabitants of the places in which I’ve imagined terrible things. Better to be the scene of catastrophes than the scene of nothing but what’s real or what could well be—a pedestrian precinct indeed. I’ve imagined happy events there too, love and sex, great deeds accomplished, enlightenments gained. The sense of presence in absence, like the ringing of the ears in silence, that I felt as a boy on hot, quiet afternoons climbing the side of Glen Valtos or clambering around the pools and boulders of the gully of the Alt-na-chuirn has echoed in the brains of characters, on this and other planets, who variously interpret it as the mindless mass telepathy of bacteria or the terrible love of God.

Beyond the literal landscapes are their analogues on other worlds. This has to be handled with care, to avoid lazy default to the familiar. For other planets, no matter how Earth-like, I reach for the holiday notebooks and photos and the geology textbooks and the coffee-table travelogues, looking for landforms of karst and fjord, desert and scabland and rainforest, and other features not found to any great extent around here. But sometimes, and consciously, I’ve reproduced Scotland even there, with variations: a moorland with a henge on every surrounding hilltop, a port town where the haar rolls in every day, a garden where bat-winged aliens get drunk on the alcohol from over-ripe fruit. (Maybe that last is too obviously the Pear Tree in Edinburgh.)

Behind all these arguable reasons—the kind of recognition and respect such re-creations imply, the realism gained by making use of places I know well enough to depict in detail—there’s something more personal. Mostly it’s love of the places (mostly—I once took a small but sweet revenge on Dornie for what years in it did to a couple of my friends). But it’s also an acknowledgement that Scotland’s streets and mountains, lochs and rain have shaped my own mind just as geological processes have carved the landscape itself. This land I live in is still the place I visit in dreams. I owe it that forming, that weathering, that uplift.

In July 2014 I was interviewed by Barbara Melville on behalf of the Scottish Writers’ Centre at the Scottish Storytelling Centre on the theme of Imagining Future Scotlands. Preparing for the event, I realised that I’d probably written about a greater number of different future Scotlands than almost anyone else. About half my novels and […]