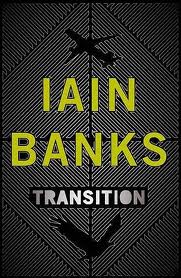 After Matter, his 2008 science fiction novel in the long-running series about the Culture, Iain Banks has wasted no time in producing another work in the same genre. Transition (Little, Brown, 2009), however, marks two possible new departures for this most prolific of Scottish writers. It is the first SF novel that Banks has published without the trademark middle initial, M, that would set it at a slight distance from what has been loosely termed his ‘mainstream’ novels of contemporary British, or Scottish, society. Is this a distinction that Banks no longer finds useful? Perhaps he feels that the difference between modern ‘realism’ and speculative ‘fantasy’ is now trifling and not worth maintaining, at least not in the case of this new novel. For Transition (Little, Brown and Company, 2009) is a novel that has turned its back on the galactic vistas and familiar Banks space-opera furniture of distant planets and Mind-ships of vast Artificial Intelligence and drones and knife-missiles and species ripe for Cultural intervention, in favour of a number of settings that are recognisably new-millennium European, heightened though they certainly are by concepts thoroughly familiar to dedicated followers of science fiction. Most noticeable on the surface of the narrative is Banks’s rejection of alien-looking jawbreaking names for his characters, such as Meseriphine-Sursamen/VIIIsa Djan Seriy Anaplian dam Pourl, which is the mind-numbing full Culture name of the heroine of Matter, in favour of fairly normal European-sounding characters, like Mr Kleist, Lord Harmyle, or Adrian Cubbish, with the occasional Oriental like Temudjin Oh. The overall effect of this is to locate Transition in a series of initially familiar Western European-type settings with apparently recognisable contemporary human characters. However, Iain Banks is still the Player of Games, and all is definitely not what it seems.

The basic concept behind the plot of Transition is just as it says on the tin. Space travel is possible in this universe, or more accurately, ‘multiverse’, but not by means of space-ships, however powerful or intelligent. What takes its place is ‘transitioning’, a transfer of the consciousness and purpose of one individual into the body and mind of another real person existing in another place, another time, another parallel dimension or world. This transition, or ‘flitting’, is effected by certainly highly-trained operatives using a special self-administered drug, called ‘septus’. Thus Temudjin Oh, an assassin, sitting at a cafe table in an unidentified Middle-Eastern-type city at an unspecified modern period is summoned to a meeting by his employer, takes his septus pill, and is immediately transitioned to a version of contemporary Paris. After his meeting, he takes more septus and flits to another identity in a slightly different Paris. All the transitioning of the novel, and a lot of it occurs, takes place between different worlds like Earth, because it is not possible to move to a totally unrecognisable environment, one that you cannot imagine, and so nothing is totally alien in the SF sense. All the locations are like places we know on Earth, some actually being on our Earth at the end of the second millennium, with the twist that our Earth is only one of many secondary or closed ‘Earths’, the whole network being overseen from a primary or open ‘Earth’, called Calbefraques. It is from this premise that the very real similarities to Banks’s Culture novels stem.

The patterning of the overseeing and controlling structures in the multiverse of Transition is closely modelled on the Culture. The overseeing function lies with the Concern, a term that suggests both a business enterprise and an interest in the welfare of others. From its base on Calbefraques, it is directed by a Central Council, whose decisions are implemented by an agency, L’Expedience, through its trained agents, the Transitionaries. The similarity to the Special Circumstances agents of the Culture is obvious; the Transitionaries intervene in the affairs of the various Earths, usually with extreme prejudice. They tend to be assassins, like Temudjin Oh, getting rid of potential threats to stability and good order. Like the Culture, the Concern aims to be beneficial in its activities, intervening only in extreme cases on the side of the good and progressive elements of a society. Yet, apparently unlike the Culture, the Concern has become vulnerable to base human greed and ambition. The Central Council is being taken over with a view to turning it into a self-perpetuating and unchanging clique dominated by its Chair, the fascinating and malevolent Madame d’Ortolan. In Madame d’Ortolan, Banks has created another of his strong female characters, so noticeable in many of his earlier novels, in this case a female villain who dominates the men around her. Yet she is not allowed to go unchallenged. Banks has created a female antagonist to counterbalance her, the enigmatic elusive Mrs Mulverhill, who leads the opposition to Madame d’Ortolan’s scheming. It is the struggle between these two women, each using the agent, Temudjin Oh, with his suddenly-discovered power of flitting without the need for septus, as a pawn in their games that provides the main theme of the novel.

In structuring his novel, Banks uses a technique familiar from earlier novels. There is a basic group of characters who carry the story forward through sequences of first-person narrative sections. Who these characters are not always clear, since Banks does not identify all of them by name. There is in particular one character identified as Patient 8262, who appears to be confined in an unlocated hospital, where he cannot understand the local language. Who he is and what is his relation to the main story remain mysteries until the end. So Banks plays games with his readers throughout, and one has to be alert to stay on top of what is going on. Whether this is to be seen as a fault depends on how alert one is. Perhaps, however, there is a fault in the novel that cannot be sidestepped. In his creation of the Concern and its system of parallel Earths, Banks may have crammed the novel too full of imaginative and admittedly exciting concepts, too many for a novel of this length. There are enough possibilities within the characters and themes of the novel to furnish a whole series, and this reader certainly felt a sense of disappointment on closing the book that there seemed to be a sudden and premature end to the conflict between Madame d’Ortolan and Mrs Mulverhill. Let us have more Transitions, Mr Banks.

Iain Banks’ writing can be located within a context of contemporary British fiction, namely the period after 1970. The rationale for the provision of a context wider than Scottish fiction is determined by Banks who, as Thom Nairn explains, has ‘expressed doubts about the place he may or may not occupy in a specifically Scottish […]

Questions? What Scotsman was caught up in a civil war before the age of twenty? Wrote a book that became the inspiration for an Oscar-winning film? Met a runaway teenager in Paris and married her against the wishes of his family? Lost his ranch to raiding Apaches? Went into Parliament as a Liberal and came […]