As my work on the new edition of James Hogg’s final collection of songs comes to an end, I’m spending a while thinking about just why Hogg’s songs meant so much to him, and what purpose his hands-on involvement in the production of this volume really serves at this late point in his career. 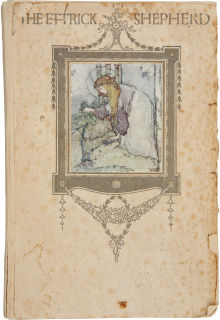 Hogg’s last little text-only collection of songs appeared in January 1831 (after a very quick publication process) and pulled together 113 songs from across a thirty-year period, many of which had been circulated in song sheets or musical collections across Great Britain, and, probably unbeknown to Hogg, also in Europe and America. Setting out, as he explained to his publisher William Blackwood, to include the songs which ‘have been popular in the first place’ (Hogg’s letter to Blackwood, 20 October 1830) Hogg also stated, with characteristic modesty, that the volume wouldn’t even contain a third of his songs, and that if Blackwood wished to delete any from the projected list, Hogg would certainly be able to replace them with even better ones! His ‘gold album’ of Songs by the Ettrick Shepherd included what had already been popular and what have posthumously proved to be his most popular songs—’Donald McDonald’, ‘Bonnie Prince Charlie’, ‘Flora MacDonald’s farewell’, ‘The Skylark’ and his most Burnsian song ‘When the kye comes hame’. And, like Hogg’s wonderful X-factor ballad competition in The Queen’s Wake (1813), it shows just how diverse his songs could be—love songs (sad and happy, pastoral and lamenting), comic, bacchanalian and social songs, political songs, songs celebrating the best qualities of the Scottish nation and character and several from his beloved Ettrick.

Unlike his earlier collection The Forest Minstrel (1810), which was clearly divided into set categories of songs (Love, National, Humourous etc.) akin to the main song collections of the 18th century, Hogg chose to present a relaxed mix of his best songs, with his own little anecdotal head notes. The inclusion of a group of songs from Blackwood’s Edinburgh Magazine‘s serial Noctes Ambrosianae (e.g. ‘The Noctes Sang’, ‘I Lookit East, I Lookit West’, ‘The Village of Balmaqhuapple’ etc.) shows Hogg’s awareness of his fame as the singing shepherd of this series. But this editorial decision also reveals his anxiety that he, James Hogg, is not really being given due credit as creator of these songs. Moreover, a substantial group of the most celebrated songs in this album (as seen by the chart-topping list above) were of Jacobite provenance, signaling Hogg’s role as the key collector of Jacobite songs of his time (his two series of Jacobite Relics appeared in 1819 and 1821).

Reclamation and retrieval of his own songs from a wide variety of popular media has two distinct purposes for Hogg at this late point in his career. Firstly it shows just how widely popular his songs are during his lifetime. Indeed the extended note about his first and most famous song is illustrative of this: Hogg tells the story of hearing ‘Donald McDonald’ performed in two very different contexts, noting that neither performance made any reference to Hogg as its creator. While this is, in one sense, a back-handed complement—to be at one with popular tradition&mdahs;it’s also a scary prospect for an artist, who has been all too often underestimated or brushed aside during his professional life. Secondly, pulling all these songs together in 1831 with little notes explaining his role as creator, performer and collector, has to do, I think, with making sure that Hogg’s own peers, not to mention future generations, are able to see and assess his importance as a songwriter and collector, as a protector of national song tradition.

And there’s even more evidence that this was indeed the case in the early 1830s for Hogg. Within a year of the appearance of Songs, Hogg completed the third and final version of his ‘Memoir’, and it’s in this last autobiography, which appeared in Altrive Tales in 1832, that Hogg really establishes his place as the ultimate Scottish songster. He tells the long story of his introduction to the work and figure or Robert Burns, noting that the inspirational story of the ploughman poet was enough to open his own eyes to the possibility of literary fame and fortune. And notably, he sets himself up as Burns’s successor in song—for shepherds, he argues, have more time than ploughman to write good songs!

While we are not blessed with many reviews, critical reception of Songs by the Ettrick Shepherd, would thus have pleased Hogg greatly. On 8 January 1831 there’s a very early review in the Edinburgh Literary Journal or Weekly Register of Criticism and Belles Lettres. It refers in its first paragraph to the ‘extensive and well-merited popularity’ of Hogg’s songs. Quoting several of the key songs mentioned above in full, it draws attention to the ‘spirit-stirring humour which the Scotch people are fond of mingling with their patriotism’ (with ‘Donald McDonald’) and the ‘tenderness and simplicity’ of ‘The Broom sae green’ or Hogg’s overall ‘versatility’ as songster. It concludes:

Hogg could easily have written this himself! But that said I’m obviously hoping that the 1831 reviewer’s conclusion will be true when this little collection appears once again in the coming months.

Introduction: In the 1530s, John Gau was a Lutheran exile from then-Catholic Scotland living in Malmö, at that time still a Danish city. It was here that he published The Richt Vay to the Kingdom of Heuine, one of the earliest books to be written in vernacular Scots. The John Gau of Malmö Prize honours […]

In January 1831, William Blackwood published James Hogg’s Songs by the Ettrick Shepherd, a selection of 113 songs which aimed to gather together, in Hogg’s own words, his ‘best songs’. A small, hand-picked assortment drawn from a vast and varied corpus of work that spanned thirty years, this would be Hogg’s second and final song […]

‘James Hogg: A Bard of Nature’s Making’ by Valentina Bold

As the title suggests, this book offers a close study of James Hogg’s poetry, treating his diverse output over six chapters. But this represents only half of the book: Valentina Bold devotes another six chapters not to Hogg directly but to a broader, though significantly related, subject. Hogg was a pivotal figure in the lively tradition of […]