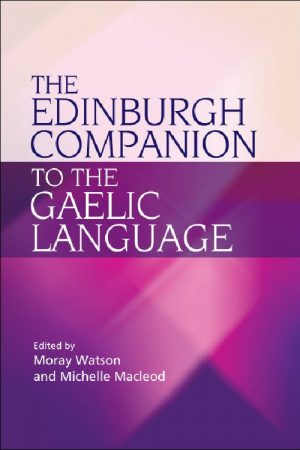 This is a book of real substance and importance. It gives very clear information on the nature of the Gaelic language, its position in Scottish (and Canadian) society and the problems—and solutions—it faces for survival.

The first two chapters provide an excellent introduction to the emergence of the Gaelic language in Scotland, and to its place in society from the 19th century until the present day. Colm Ó Baoill’s “A History of Gaelic to 1800” gives a lucid account of the language from its origins in Irish until, with the publication of the Gaelic New Testament in 1767 and the Old Testament in 1801, “an acceptable way of writing an acceptable form of Scottish Gaelic had at last been established”. Michelle MacLeod’s Chapter on “Language in Society: 1800 to the Modern Day” takes a broad sweep. She shows the effect of the Clearances and the Disruption on the Gaelic way of life and the emergence of the Free Church as a strong supporter of the crofters to the extent that evangelical Presbyterianism became the dominant cultural identity of the Highlands and Gaelic became “the language of spiritual affairs, English of worldly advance”.

Gaelic, however, suffered a major setback when it was ignored by the Education Act of 1872 and it was not until the Education Act of 1918 that it was recognised in law. In the 20th century the disproportionately high number of deaths of young Highland soldiers in WWI did terrible damage to Gaelic. School qualifications in the language, however, were introduced and the 1918 Act insisted that local authorities in areas where it was spoken make provision for its teaching. MacLeod goes on to discuss the development of Sgoiltean Àraich (Gaelic Playgroups) which became the bedrock of Gaelic Medium Education, the most successful manifestation of which to date has been the establishment of the all-through primary and secondary Sgoil Ghàidhlig Ghlaschu (The Glasgow Gaelic School) in 2006. Provision for Gaelic in Higher education is discussed and the development and effect of publishing and broadcasting is explored in some detail. The chapter concludes with some excellent suggestions for research which will support Gaelic development and language planning.

Richard A.V. Cox’s in his chapter on “Gaelic Place-Names” tells us that place-names show that “at one time or another Gaelic-speaking communities thrived throughout most of Scotland” except for the south eastern area of the Borders, northern Caithness and Orkney and Shetland. He skilfully outlines for us a systematic and technically sophisticated approach to the study of place-names. His onomasticon is particularly helpful to non-Gaelic speakers and his treatment of dinn-seanchas (the study of the lore of place-names) fascinating. Andrew Breeze takes us on a brief but very interesting tour through the development of “Gaelic Vocabulary” as it borrows from Latin, Pictish, Scandinavian and French and, finally, English and Scots—where the borrowing is frequently from Gaelic to Scots, not the other way round! Moray Watson’s “Language in Gaelic Literature” examines use of language in early and contemporary poetry and culminates with a quotation from William Gillies describing the poetry of Sorley MacLean:

His discussion moves on to analysis of the còmhraidhean (conversations), short didactic pieces, of Rev Norman MacLeod which were published first in periodicals and later in the volume Caraid nan Gaidheal (The Friend of the Gaels) in 1867. Watson demonstrates how these pieces influenced the structure of early modern Gaelic prose (such as the first Gaelic novel, Dùn-àluinn (1912), by Iain MacCormaic) and also the very popular Gaelic drama. He concludes by pointing out that the application of linguistic techniques can lead to better informed literary criticism of Gaelic literature and the inclusion of the essays on linguistic topics in this volume by Anna R.K. Bosch, David Adger and Seosamh Watson show clearly the resources and expertise which are available in this area.

The other essays in the book examine the situation in which Gaelic finds itself today and the major problems it faces. In “The Gaelic Language-Group: Demography, Language-Usage, -Transmission, and -Shift” Kenneth MacKinnon concisely describes the reasons for the massive decline in Gaelic speakers over the last century. Interpreting important documents, especially the Census for 2001 he emphasises that not only are Gaelic speakers leaving the Highlands in considerable numbers but they are also being replaced by a reciprocal flow of non-Gaelic speakers; that fewer than half of all Gaelic speakers live in entirely Gaelic speaking households (with the consequent problem of transmission of the language to the next generation); and that two thirds of all Gaelic speakers now live within essentially non-Gaelic speaking communities and are frequently isolated from other Gaelic speakers. The situation, therefore, for the survival of the language is critical and robust measures will require to be taken. He concludes:

In “The Drunk Man’s Broad Road” Ronald Black gives a very thorough and scholarly account of the history of Gaelic orthography (spelling). After examining 16th and 17th century texts he concludes that we should see the eighteenth century poet Alexander McDonald and Rev Alexander MacFarlane “jointly and inseparably as the founding fathers of Gaelic orthography”. He then discusses the orthography of Scriptural translation and its vital importance. But eventually the orthography of Scripture becomes a problem because it is based on Southern Gaelic and the southern dialects are dying and writers and editors are coming from the west. Dwelly’s Illustrated Gaelic-English Dictionary(1901-1911) solved many modern spelling problems and “established a fresh orthodoxy to rival that of the Scriptures”. In 1976, however, Scottish Certificate of Education examiners became concerned about the competence of candidates and a report called “Gaelic Orthographical Conventions” for the guidance of students was published in 1981. But, in retrospect, Black believes this has been far from beneficial. It is often over-prescriptive and leads to confusion and ambiguity. In his view it will retard the progress even of a committed student—an undesirable situation at a time when inter-generational transmission of the language can no longer be assumed:

Finally, in his chapter on “Language Planning” Robert Dunbar explains that historically most language planning had been to the detriment and suppression of Gaelic. In the last thirty years, however, the pendulum has at last begun to swing the other way. He outlines the three types of language planning that must be successfully implemented to ensure the future well-being of Gaelic. The first of these is Acquisition Planning: this involves the strengthening of educational provision. The current provision is simply not providing enough speakers to sustain the language. The second is Status Planning: the language requires to be used by government and official bodies to give it public parity with English. This has been most successful in the field of broadcasting. The third is Corpus Planning: this calls for a concerted policy on the provision of Gaelic resources in education, literature and the arts. At the moment this is too fragmentary and tends to rely on the drive of enthusiastic individuals. Most encouraging, however, has been the passing of the Gaelic Language (Scotland) Act 2008 which gives Gaelic the status of “an official language” of Scotland “commanding equal respect to the English language”. In addition to producing a language policy for Gaelic the Act also boosts language planning, for it required the creation of a public body, Bòrd na Gàidhlig, which is obliged to draw up a language plan every five years. Since its inception the Bòrd has supported vital community language planning and has done much to support the visible and audible profile of Gaelic. It has the authority to require language plans from local authorities and can prompt them in a number of ways to enhance their Gaelic provision. The future of Gaelic will depend to a great extent on the Bòrd’s success.

The Edinburgh Companion to the Gaelic Language is authoritative and accessible. It is immensely useful and helpful to anyone interested in the Gaelic language and its future well-being.