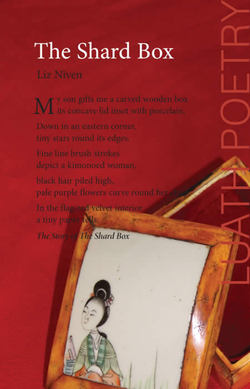 In 1792, four years before the death of Burns, Henry Dundas struck a deal with Lord Macartney and sent him off to lead the first British expedition to China. When they were received into the emperor’s presence almost a year after they set out, King George III’s delegation were treated with cool formality, their gifts—telescopes, planetariums—were declared no more than amusements for children, a lens amusingly scorched a eunuch’s finger, a suspension carriage was declared unusable as the emperor would never allow anyone to sit higher than himself with his back turned. Seventy years later, when the imperial palace was destroyed by British and French troops, the gifts were found untouched, relegated to a stable.

China is closed. The cliché of the inscrutable stare has a truth in it. Yet it is also open, an economy growing on the world stage: a paradox. There is no Great Wall. There are lots of walls, built in different places, over different eras, and there were always ways to get around them.

Liz Niven’s new poems are not emulations of Chinese forms, perspectives or attitudes but rather firmly and confidently earthed in Scotland, reading parts of that massive country in the east from the point of view of our infinitely various, much smaller one here in the north-west European archipelago, after a number of visits there. Her techniques are diverse: translation into Scots of Chinese poems, Brechtian observation of foreign things, jokes; they are often understated, ironic, compassionate, unsentimental, unobtrusively restrained. Some are very funny, some poignant, some angry. None are grand: there is no trace here of the pompous or pontificating. Many are prompted by particular events in recent history: the protests in Tian’anmen Square, the investment in the show for the Olympics, the one-child family policy, government enforcement of social organisation. They are not moralistic in any self-righteous western way; they do not proceed from the sense that the west is morally superior because of the facile rhetoric of democracy and justice. Rather, they proceed from two unanswered, perhaps unanswerable questions.

The first is social: to ensure freedom, you need regulations. Ah, but what sort of regulations would you like?

Two of Niven’s children have lived in Beijing and her visits have been prompted by family. This is a perennial and happy connection, but the novelty of the poems also reflects the strangeness of foreign encounter and the particularity of the historical moment, in this transitional time. So we are vouchsafed both security and uncertainty, both reliable affirmations and unpredictable encounters and outcomes. We read the book at various levels: immediately, for the freshness of the verse, more deeply, for the uniqueness of the circumstance, and more deeply yet, for the different connections and patterns that emerge, and then again historically, as if some poems were good journalism in verse, reporting on events of consequence.

For example: the global economy is a cautionary reminder of the relativity of cultural value, in ‘Maybe made in China’: ‘”Made in China” clothes much of the West / Maybe check that before voicing protests.’ In ‘The Song of the Migrant Worker’, the building of the ring road round Beijing is described in the voice of one of the labourers, although the language is unaffected English, as if to eschew the novelty of a vernacular voice and to suggest that the same story might be told in just about any country: ‘Family back in Hunan Province wait. / Three hundred yuan a month we send them back.’ When I visited China in 2007, the anthology of poems and essays in which my work was published in Chinese translation was for sale at two hundred yuan: two-thirds of this worker’s monthly wage. ‘Migrant workers’ takes the theme further, this time in Scots, and linking out to America: ‘flittin frae citie tae citie’ … ‘Mair Steinbeck than Kerouak.’ There’s a lovely, poised, wry poem called ‘Stable economy’: a man fills the cart on his bike with pottery horses for sale, proceeding steadily as the currency is ‘fluctuating wildly.’ Specific places—the 798 Art District—call to mind the factory workers whose ghosts might inhabit these now élite art venues and exhibition-spaces.

A bitter, comic, worker’s monologue in Scots harangues on the subjects of the mass saturation of society with modern toys (shades, ipods, Nokias, mobile phones, cars) while the lassies are all ‘aff tae the Jing’ (Beijing): ‘A havenae had a damsel in distress fir years.’ And the ‘lahdedah citie wummen’ are ‘mincin aboot’: ‘No even worth poppin oan a cocktail stick.’ The humour is remorseless: ‘A need a fag. At least ye can still hiv a fag inside ower here.’ And in ‘Let’s hear whit the dragon hud tae sey aboot the Olympics’ we have a hard judgement:

The Scots-language characters voice their opinions in such a way it prompts the thought that there would be a good short play here. As poems, I think one of the most effective is ‘Mao’s mangoes’. In chilly, unemphatic English, Niven tells us how the Chairman gave some workers a gift of mangoes in 1968. They were transformed overnight into a sacred relic. The facts as stated deliver the stark irony of the hard recognition of materialism confronted by the human gesture of a gift and the human need to make special or sacred, to revere, something so rare. Underneath this is a pitiful sense of the failure of reason to supply the great communist ideal: in some form or other, the human irrational always cuts across the epic effort. And the poem’s closing picture is terrible, evocative of the pathos of that effort and the cruelty that forecloses on it:

That would do as a poem in itself. The queues still forming in Tian’anmen Square to view the corpse continue to demonstrate how ‘The fruits of his labours / linger on.’ Above the entrance to the Forbidden City, I’m reliably informed, the portrait of Mao looks out, and every year it is replaced by a new copy, by a new young artist, with the one imposing rule that the new portrait should be exactly identical to the last one. In such a culture, art is truly prized.

The Shard Box elaborates these themes and introduces a selection of poems by Bei Dao, translated into Scots. Bei Dao (b.1949) is a remarkable figure, formerly a Red Guard champion of Mao, he was ‘re-educated’ as a construction worker during the cultural revolution and was prominent among the group known as the Misty Poets, editing the magazine Jintian (Today) and protesting in Tian’anmen Square in 1976 and 1989, after which he was not allowed to return to China. Niven’s versions of ‘Comet’, ‘Boat ticket’ and ‘Stretch oot yer hauns tae me’ are moving and effective, both defamiliarised and objectivised in Scots and at the same time made more intimately affecting, without emotional overload. These are fine poems in themselves, and Niven’s translations are unpretentious, memorable and strong.

The title poem describes a present to Niven from her son, in which small slip of paper explains that during the cultural revolutrion, the keeping of treasures was deemed bourgeois and illegal, so that porcelain was smashed and discarded, kept only in shards. At that time, the poet recalls, she and her family were busy becoming themselves, as now they are fragmented, shards in different parts of the world. Her children are

But of course, she knows that the wish is as futile and would be as cruel as the cultural revolution itself. Under its wistful gesture, that ‘If only’ conceals a political understanding of hopeless desire and paranoid authority, recognised in the predeceding ‘can’t, shouldn’t.’ We are left with the shard box, the collection of fragments retaining the ghosts of connection, or more realistically, in dialogue. The book ends literally with mother and daughter corresponding by email, talking about the meaning of the title of the book: small pieces of something that once was complete, that might be repaired, says the mother; no, says the daughter, life was never perfect, humans are a bumpy lot, and ‘that’s where the diversity and mystery and opportunities and creativity all come from.’

There is more than enough in this book to justify the daughter’s opinion, but the pathos of the epic effort haunts the mother’s understanding too. The most personal, familial instance thereby embodies the social, political, national tensions and strengths the current and historical character of China—and for that matter, Scotland—so evidently show. You have to get as close as this to understand it, to read it deeply. The understanding depends on careful proximity. What most people think of as the Great Wall is only one among many, a sixteenth-century construction north of Beijing, but it cannot be seen from the moon. Neil Armstrong thought it could, but the Geographical Magazine indicated that was just cloud formation. No. You have to be a lot closer to the thing to see it really. The virtue of these poems shows that proximity.

Robin Fulton Macpherson was known for a long time as Robin Fulton, a poet of chilly distinction in The Spaces Between the Stones (1971), The Man with the Surbahar (1971) and Tree-Lines (1974); as a sharply discerning critic in the book Contemporary Scottish Poetry (1974) and the essays collected in The Way the Words Are […]

It’s a familiar story: the vast popularity of Walter Scott helped promulgate the visualisation of Scotland as Romantic landscape, wild seascape or urban or Gothic cityscape. This process was well underway in paintings of the nineteenth century and the images associated with the country entered popular consciousness often with little regard for the material conditions […]