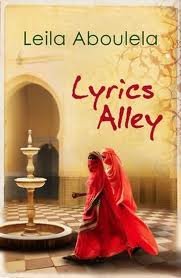 Lyrics Alley is a story of faith and love: thoughtful, complex and deeply affecting. Set in Sudan in the 1950s, it explores the lives of the Abuzeid family at a time of major political and cultural change in the country. Mahmoud Bey, the head of the family, is, like the country itself, caught between two cultures, and his marriages symbolise the tensions between them. Hajjah Waheeba, mother to his two eldest sons, Nassir and Nur, is a traditional Sudanese woman; she has tribal scars on her cheeks, wears a tobe, and cooks on an open fire in the hoash—the semi-outdoors quarters at the back of the house—which is her domain. The lively and sociable hoash, where the woman and children gather, is in contrast to the elegant quarters of Nabilah, Mahmoud’s younger, Egyptian wife, mother of his son and daughter, Farouk and Ferial:

Mahmoud is deeply aware of the paradoxes of his life. When Nabilah visits him in the hoash as Waheeba is giving him a massage, he is troubled by the incident:

In the same way, Mahmoud negotiates conflicting external worlds as Sudan moves towards independence and away from British and Egyptian influence.

The family situation is a complex one. The charismatic Mahmoud has, with the help of his brother Idris, built up a thriving business. At the beginning of the novel, Mahmoud is ill, and it is evident how many people depend upon him and how their lives would change were he to die.

Mahmoud’s older son, Nassir, is married to Idris’ daughter Fatma, but his drinking is a problem and everyone looks to his brother, Nur, to continue his father’s success. Nur is betrothed to the lively and charming Soraya, Idris’ youngest daughter. Not only is Nur intelligent and hardworking, he is also a poet, though this is regarded as a frivolous pursuit in a family whose livelihood is based on commerce. When Nur suffers a terrible accident which leaves him paraplegic, the effect on the whole family is profound.

The tragedy polarises the different cultures within the family. Waheeba travels to Alexandria to be with her son; she has never previously left Sudan other than to make her pilgrimage to Mecca. On arrival at the hospital she ‘[…] threw herself on Nur’s bed and made a scene.’ Waheeba sleeps on a bed in Nur’s hospital room, cooks meals for him and feeds him like a baby. She has no faith in doctors, blames his paralysis on black magic and wishes to take him home so the curse can be lifted by faqirs. Mahmoud, on the other hand, takes Nur to London, placing his faith in medical specialists.

Unlike her previous novels, Lyrics Alley is told from multiple viewpoints and Aboulela moves skilfully between them. Not only is each character’s inner life clearly delineated, but the choice of character allows us the most effective standpoint for a particular event. Nur’s accident is seen from the perspective of Soraya while its aftermath at the hospital is viewed through the eyes of Mahmoud. When the action moves to London, where Nur undergoes further operations, the scenes are written from Nur’s point of view. This layering of viewpoints is subtle and highly successful. Having been so close to the inner life of Mahmoud Bey for much of the novel, it is a shock to see him from Nur’s viewpoint after he has been told by the surgeon in London that there is no hope of Nur’s recovery:

Leila Aboulela’s handling of such a complex range of characters is superb. The main plotline is counterpointed by the story of Ustaz Badr, tutor to Mahmou’s children, as he struggles to make a living and cope with the demands of his young family and elderly father. Badr is a deeply religious man and it is through his character that we are given a strong sense of the beauty of the practice of religion:

It is Badr who is able to help Nur (then at his lowest point of despair after Mahmoud breaks off his engagement to Soraya) make some sense of the apparent senselessness of the accident which has robbed him of the life and future he thought was his:

As in her other books, faith underpins everything, but Lyrics Alley is different in that it is set entirely in a world built on the social and religious values of Islam. The characters do not have to justify their faith or to practise it with difficulty in an alien culture; here the conflicts and differences are centred round the range of beliefs and values within Muslim cultures. The characters display varying degrees of devoutness and divergent attitudes to certain practices. Unlike Badr, Soraya ‘had never been spiritually inclined’ yet she, too, is aware ‘that people were governed by a will greater than their own’.

Some of the greatest conflicts and clashes of values are demonstrated by the wives. Nabilah and Waheeba, who, among a cast of rich characters, are two of the most complex and interesting. It is a mark of Leila Aboulela’s strength as a novelist that no one character in the novel has our full sympathy, though there is particular sensitivity and power in her descriptions of Nur’s experiences. In this passage he hears the dawn azan from the nearby mosque:

In such a complex situation there is no easy resolution and I would not wish to give away too much of the plot. However it is through words and poetry that Nur comes to some sense of acceptance of his circumstances and finds purpose and meaning in a life he would not have chosen:

Nur’s poetry has a political and social dimension too. As turmoil in Egypt follows the deposition of King Farouk it begins to look as if the independence of Sudan is near. Nur’s poetry is set to music and broadcast on the radio. Though physically unable to move, he too plays his part in the liberation and development of his country.

Though the political upheaval of the country is important in the novel, it is dealt with more through symbolism than overt statement. After the signing of the Self Government Agreement between Britain, Egypt and Sudan, Mahmoud contemplates his relationship with Nabilah, now living in Egypt after their separation. Mahmoud has always loved and been drawn towards Nabilah, but though ‘It was not a difficult choice between the stagnant past and the glitter of the future, between crudeness and sophistication’, inevitably, life is not that simple. Nabilah, according to Mahmoud, had always desired ‘to wrap his Sudanese identity and limit it with spatial clarification’:

Lyrics Alley is a complex and rewarding read; mature, assured and characterised by the delicate lyricism of language and sensitive understanding of human nature which are the trademarks of Leila Aboulela’s work.

Lyrics Alley by Leila Aboulela won the Scottish Book of the Year award for Fiction in 2011. Lyrics Alley is published by W&N (an imprint of Orion), 2010.