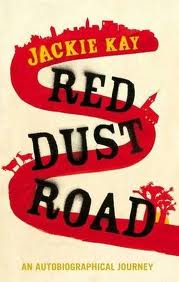 Red Dust Road is a memoir by the Scots-born writer Jackie Kay. The title evokes somewhere far beyond Scottish shores and indeed the book travels long distances in place and time as she reveals the complex mosaic of her past.

If Kay’s birth parents had married and lived together happily ever after, there would have been no great story. If Kay’s father had been white …

Instead, Elizabeth, her birth mother, a young nurse from an insular, mainly Catholic community in Nairn was packed off to Edinburgh to save the family’s face when she became pregnant by a Nigerian student at Aberdeen University called Jonathan. The child, christened (ironically?) Joy, had to be given up for adoption: ‘[…]back in the sixties, people just didn’t have babies with black men. Well, no up here at any rate,’ as Kay’s Aunt Edna explains to her some 44 years later.

Race and religion are key players in this book. The book opens with the most dramatic scene when she first meets Jonathan, her born-again Nigerian birth father. He blesses her extravagantly for two hours in a hotel room prompting Kay to confide to the reader that ‘Christ Almighty, my father is barking mad.’ He then wants nothing more to do with her because, ‘You are my sin,’ a guilty secret that he has kept from everyone for 40 years.

Her Catholic birth mother, Elizabeth, subsequently became a Mormon and had reconciled herself to having given up her first-born child by believing, as Mormons do, that adopted people cry out to be adopted when they are still in the womb. Kay’s unsentimental narration of her encounters with her troubled birth parents, and their coping mechanisms, is powerful and moving. At times, though, Kay writes so confidentially, that one wonders what the protagonists will feel when they see themselves revealed in a less-than-flattering light.

The stars of this memoir are the warm-hearted, down-to-earth socialist couple who wanted but couldn’t have children. Unwilling to lie about their non-church-going habits to the adoption agencies which were mostly run by religious organisations then, they were not considered eligible parents. When her mother said, ‘By the way, we don’t mind what colour the child is,’ suddenly there was a boy available for them: Maxie, Kay’s elder brother. ‘He wasn’t even thought of as a baby,’ her mother adds.

With such deft use of dialogue, Kay displays both the prejudices of then and the defiant generosity of spirit in her adoptive parents. Two years later, the same agency offers them the yet-unborn Jackie/Joy as a companion for Maxie.

Maxie and Jackie grew up beloved and valued by parents who were honoured by the opportunity to love and cherish these two children. The warmth of Kay’s happy memories of her parenting by these good and principled people infuses the book and has given her the strength to transcend the cruelties inflicted by many others: casual racism is a sinister undercurrent throughout her life.

It is when Kay herself becomes pregnant that she feels compelled to try and find her birth parents, to find out who she really is in terms of her heredity. The father of her own son is implied only obliquely, and he grows up in a home without a male role-model. After being encouraged once to watch his grandfather shave, the child says, ‘He didn’t do it properly, he didn’t do his legs.’ Kay reveals this without comment, seemingly unaware of the irony of second-generation dislocation between a father and his child.

Dislocation is also reflected in the structure of the book which is written in more than thirty sections, none sequential, and swings between past and present and past again, between Scotland, Lagos, Aberdeen, Manchester, Ukpor, Milton Keynes … gradually building up the picture, the quest for answers.

There is unexpected rejection and unexpected acceptance as Kay tracks down her unwitting relatives: Kay who was too dark to be accepted as a Scottish school girl and too pale to be accepted as an Igbo. In the African market place, she attracts a crowd that follows her and touches her skin because she appears white to them. ‘I realize I want to be accepted. I want other Nigerians to see in my face that my father is Igbo.’

In 2012, Kay will become 50. Despite, or perhaps because of, the extremes in her life, she should feel a sense of achievement. Red Dust Road has been her long path to self-knowledge and self-acceptance, and is itself now trailing clouds of glory, including Scottish Book of the Year, 2011. It represents transcendence of the cloud under which she was born and of its long shadows.

Red Dust Road by Jackie Kay is published by Picador, 2010