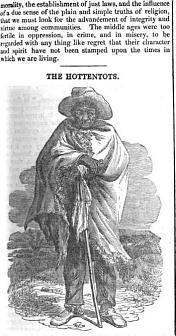 It is extremely difficult to characterise national attitudes towards particular races, as these attitudes are dynamic and there is always a range of opinion, but it is safe to say that the so-called ‘Hottentots’ have consistently been the most abject victims of the European imagination. From filthy, barely human savages to the prurient objectification of Saartjie Baartman, ‘The Hottentot Venus’, the image of the ‘Hottentot’ in European eyes is summed up nicely by the title of Linda E. Merian’s book on the topic: Envisioning the Worst. Certainly, Andrew Geddes Bain (1797-1864), a geologist and road engineer from Thurso who emigrated to the Cape in 1816, used most of the prevalent colonial stereotypes of ‘Hottentots’ in his in/famous play Kaatje Kekkelbek or Life Among the Hottentots (1838): ‘Kaatje’, a resident of the Kat River Settlement, is a smelly, illiterate, garrulous, recidivist thief, with large buttocks, and very loose morality.

Thankfully, we also have the liberal (and consequently rarer) voice of Thomas Pringle (1789-1834). Pringle was born in Blaiklaw, Roxburghshire. He became an 1820 settler in the Cape (for six years) before moving to London where he edited several magazines and served as secretary of the Anti-Slavery Society until his death. It is in his poetry and travel narrative, combined as African Sketches (1834), where he strives to present alternative views of South Africa’s many races, including the ‘Hottentots’.

Admittedly, fresh off the boat, Pringle portrays the ‘Hottentots’ in somewhat negative and unflattering terms: their language sounds like ‘uncouth clucking gibberish’ ; a ‘Hottentot’ boy ‘trot[s]’ beside him, and when they lie curled-up, asleep, they resemble ‘hedge-hogs’. By 1834, however, Pringle’s concern for them is overtly political. In chapter thirteen of his Narrative, devoted to the ‘Hottentots’, Pringle makes a few generalisations about these ‘aboriginal’ inhabitants of South Africa. He sees them as an originally pastoralist race who have been systematically deprived of their land by the ‘white man’s stride’, and degraded by colonists through decades of abuse to the condition of serfs, in many cases worse off than the slaves. Though they did rise up against colonial oppression in the closing years of the eighteenth century, this ‘naturally mild’ race, characterised by their ‘generous liberality’, had been ‘reduced to a condition of degrading, grinding and hopeless bondage’. After detailing the horrific oppression suffered by ‘Hottentots’, as well as his efforts to have ‘the last Hottentot chief who attempted to stand up for the rights of his countrymen’, David Stuurman, returned from New South Wales, whither he was transported in 1823, Pringle’s argument turns to current affairs.

On 17 July 1828, the 50th Colonial ordinance, the ‘Hottentot’s’ ‘Magna Charta’, was passed at the Cape, giving the ‘Hottentots’ rights as colonial subjects. This caused an extremely negative reaction, even amongst ‘English colonists (and not those of the lowest class) who joined most vociferously in the ungenerous outcry’. The main bone of contention was the so-called Kat River Settlement, where ‘Hottentots’ were allocated parcels of land recently taken from the Xhosa chief ‘Makomo’. The government provided these settlers with a minimal amount of seed corn, and armed about 700 of the men, which caused great alarm amongst colonists. In fact, the colonial government got a very good deal. The ‘Hottentots’ proved an effective barrier against incursions on the frontier, at very little cost. The residents of Kat River irrigated and farmed the land themselves, and within a year were already supplying produce to the colonial army. The scheme aimed to convert the ‘Hottentots’ from pastoralists to agriculturalist by putting them ‘on probation as free citizens’ for a period of five years, after which they would gain title to the land. Pringle demonstrates that this was easy to achieve if they were treated as a ‘free peasantry’: owing to their natural ‘industry and docility’, they were well-equipped to enjoy all the benefits of ‘rational freedom’, in other words, being subjects of the British Empire. After only a few years, a race of people who, ‘for generations made a by-word to the civilised world, for stupidity, indolence, improvidence, intemperance’ had shown that when ‘the door of many ambition was flung open to them—their self-government, their docility, their singular temperance, their industry, their ardour for religious and general instruction, and their steady good conduct—are facts which speak volumes’.

Though Pringle’s wholehearted support of what he viewed as benevolent colonialism is extremely distasteful to us today (the inhabitants of Kat River are described, after all, as prisoners on probation) we should not forget that Pringle was arguing this case to a majority of colonists whose hearts were ‘sealed up by the most vulgar prejudices of caste and colour’. His underlying Romantic conviction that all men and women are equal has become generally accepted today, but the dream of an egalitarian, civilising and Christian empire is mostly recognised for what it was.

Even so, by portraying the ‘Hottentots’ in African Sketches as debased by colonial injustice, but also as human beings worthy of equal rights, Pringle was able to make a powerful anti-slavery statement in the following sonnet (1834 version):

Interestingly, by furnishing the ‘Hottentot’ in this version of the poem with a ‘Libyan bow’, rather than the ‘boor’s huge firelock’ (as in the 1827 version), Pringle may have been suggesting that these people were descended from an ancient, light-skinned, North African culture. If modern genetic investigations prove correct, the Khoisan peoples have been around for a lot longer than that!

Martin Stannard notes in his biography: ‘Spark may have been raised in Edinburgh but she grew up in Africa’. When Muriel Spark (then Camberg), sailed to Africa in 1937, she planned it to be a short stay. Sidney Oswald Spark, an older Jewish Scot from Edinburgh, whom she had agreed to marry despite the concerns […]