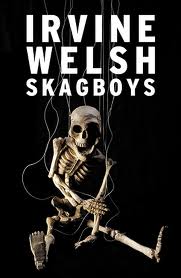 Irvine Welsh begins his twelfth book to date with two quotations. The first is Margaret Thatcher’s famous declaration that: “There is no such thing as society”. The second is from the eminent American novelist, Herman Melville, who once described the mystical blackness of puritanical gloom as: “That Calvinistic sense of innate depravity and original sin from whose visitations, in some shape or other, no deeply thinking mind is always wholly free.”

If Welsh’s debut novel Trainspotting stylishly dramatised drug addiction, then its prequel, Skagboys, attempts to entice the reader towards a more analytical angle, asking: what was it exactly that perpetuated the obliteration of working-class communities in Edinburgh in the 1980s?

Although Trainspotting – possibly because of Danny Boyle’s glamorised film version that followed in 1996 – is often seen the zeitgeist of the hedonistic culture of the 1990s, the novel was actually written in the dark days of Thatcherite Britain, a period where a sea-change took place in British politics, says Welsh.

“Now it seems very clear that the 80s was a kind of defining era in how we would turn out as a society, where Britain would become this very individualistic and atomised type of place. The previous idea that the government would actually be responsible for what happened in the society was taken away. There suddenly seemed to be this void: three generations of people who hadn’t worked, where there was nothing to do, and there was no way of making a living apart from the black economy.”

And the Melville quote, where does that fit into his thesis?

“Well I also wanted to show that there was an individualistic aspect to all this self destruction. It goes hand in hand with the political chaos,” Welsh adds.

Most accomplished writers usually have one obsession which they draw an entire body of work from. Welsh’s continual fixation – one could argue from reading his work – is his melancholic lament to the decline of his home city: once a global powerhouse, leading the world with both industrial and intellectual impetus, it would eventually become more infamous for its drug addicts.

The following passage from Skagboys poetically delineates, both, Edinburgh, and indeed, Scotland, as a fallen empire:

This innate sense of social deprivation that Welsh depicts in his fictional universe mirrors very closely a society he witnessed as a young man growing up in Leith. Deep rooted within these communities – besotted with poverty and unemployment – was a tradition of vocalising grievances – both local and national – in the familiar milieu of the public house. These conversations that Welsh would bear witness to, and the characters he would encounter, would eventually etch themselves into his consciousness, providing him with the inspiration to sit down and write fiction for the very first time at the age of twenty eight.

Despite once declaring himself a member of the “upper class” in an interview he gave some years back, Welsh has an incessant obsession with class warfare, and constantly rails against the hegemonic constraints of the bourgeois British novel. The hero in Skagboys, Mark Renton, is extremely class conscious, and seeks to remind himself constantly of his working class credentials. When he goes to university, he feels a certain resentment towards the middle classes, who see him as somewhat uncouth because his dialect does not match that of the Lallans Scottish dictionary. You suspect from speaking to Welsh that he may feel this way himself, despite his outstanding literary achievements, and the monetary rewards he has received for them over the last two decades:

“Since this book has come out and any interviews I have done, there is all this stuff about my accent. In the UK, it’s such a big thing, people are determined, or viewed by their accent. In the United States – where I live now – there is no interest in it at all. When I lived in Edinburgh my accent was different from everybody else’s, it’s like, even in your own city, there is a kind of judging going on. It’s fascinating to me because even though we are moving to a money society, we’ve also keep the worse elements of a class society,” he says.

Any readers of Welsh’s novels will be familiar with the tremendous sense of tribalism, loyalty, and friendship that exists within the closely-knit gang of characters he sketches his novels around. Beneath the stealing, thieving and backstabbing, when reading Skagboys, one convincingly believes in the effervescent bonds of friendship that Welsh portrays between Renton, Sick Boy, Begbie and Spud. This idea of undying loyalty that his fictional characters share, is still a prevalent practice that’s intrinsic to his own group of friends who he grew up with in Leith, he says.

“My pals back home, you know, there is a hardcore of us, and there is tremendous loyalty. I think any community where people realise that you don’t have much around, and all you really have is each other, well you’ve got to be able to back each other up. I can think of around half a dozen times in my life when I’ve let friends down significantly, for all sorts of reasons. These are the things that kind of haunt you, and you regret for the rest of your life. It’s also when you feel that you’ve been let down in a fundamental way, they are the hardest things to forgive.”

One of Welsh’s most celebrated creations, Francis “Franco” Begbie has – in both Trainspotting, and indeed Skagboys – an unmitigated penchant for violence. I mention to Welsh that I surprisingly enjoy the passages where Begbie unleashes his fiery temper, often imbuing brilliant moments of black comedy in the process. Are these bloodthirsty scenes of fiction that Welsh depicts, a reflection of a culture that readily indulges in violence as a form of pleasure? Welsh seems to think so.

“Different forms of violence, whether it’s people watching boxing, or getting involved in fights when they are after a few drinks, it’s all very much part of the human character. We accept that some level of aggression is necessary. We want to think we’re above it, and we’re beyond it, that we’ve evolved – and to some extent we have and we should keep moving in that direction – but I think the more civilised we have become, we do get our kicks from violence by proxy. Even sending people off to war for example, like I’m sure Blair and Thatcher got some sort of buzz from sending people off to these wars that they’ve never physically been part of themselves. There is definitely a ubiquity about it.”

Usually after conservative critics complain about the levels of violence in Welsh’s books, not far behind them in the queue are the feminists. At the 2006 Edinburgh International book festival, Welsh was scolded by some members of the female audience. They attacked his books, accusing him of reinforcing patriarchal stereotypes, and described his work as misogynistic. Welsh seems a little uncomfortable when I ask him about this episode, and maintains that most of the good feedback he usually gets from his readers is actually from women.

“If anything some people say my books are more anti-male than anything else, because they don’t show men in such a great light. I’m writing a book at the moment where two women are the central characters. I do want to give women more air-time in my stories. In fact, I want to give people of all ages, and different classes more air-time as well. I think that’s the only way you keep testing yourself as a writer. I’ve carved out this niche for myself, so I want to move, not so much out of it, but around it a little bit,” he says.

If an Irvine Welsh novel once had the ability to shock, that moment has clearly passed. He does, however, even surprise himself sometimes when he sits down to re-edit work he has previously hammered out from his subconscious straight onto the page:

“Traditionally, I’m interested in how people fuck up. This has always been my mission as a writer, to explore when things are going bad enough already, why we make the wrong decisions to compound our misery. Having said that, you then look back over what you’ve written, and get that kind of cold sweat moment where you think, my mother is going to read this!”

Welsh firmly believes that any novel he writes, fundamentally, must project a moral statement. There are times however, he admits, that he finds it hard to strike a balance between strength of character, and maintaining that moral authority. As a writer, that is just something you have to accept though, he says:

“I think Marabou Stork Nightmares and Filth were the two hardest books to live with, because you’re in the heads of two writers who are both fucking crazy, and they are both doing terrible things, unremittingly. So for me, to be inside somebody’s head like that, it’s very difficult.”