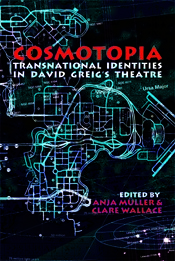 This is, as the blurb informs us, ‘the first sustained and multifocal analysis of [Greig’s] work with a collection of twelve original scholarly essays and a specially commissioned interview with the author…’ Given that Greig has been writing and directing since the early 1990s, and has been commissioned by national theatres such as The Royal Court, the Royal National Theatre and the Royal Shakespeare Theatre, and has worked as dramaturge for the National Theatre of Scotland as well as opening the Edinburgh International Festival in 2007 with his translation of Euripedes’ The Bacchae, one has to ask why it has taken so long, and why this has come out of Europe rather than Scotland, where Greig lives and works.

However, this is an extremely welcome addition to Scottish theatrical scholarship, as it situates Greig and his plays in the mainstream of contemporary European drama, reflecting the eclectic range of topics and themes which are found in the Scot’s writing, from his earliest beginning with Suspect Culture (including such plays as Europe, The Cosmonaut’s Last Message to the Woman He Once Loved in the Former Soviet Union and Casanova) to 2010’s imaginative sequel to Shakespeare’s Macbeth, Dunsinane. Most of the contributors are researchers, lecturers and theatre practitioners in the United Kingdom and Europe, all with extensive experience in the contemporary European dramatic environment, many with considerable writing credits. The principal concern of the collection is the way Greig’s theatre deals with the impact of globalisation on notions of identity and belonging; how the plays frequently stage a non-place or transnational place where a group of disparate characters with different ethnic, class or religious backgrounds negotiate their relative positions and identities.

This notion of the transnational has been developed since the fall of the Berlin Wall in 1989, the subsequent struggle for independent national identity, and an extension of the experiences of diaspora, migration and transnational encounters that have hitherto been largely reserved for postcolonial criticism. Transnational identity is found in Greig’s plays in the tension between the local and the global, the dialogue with national constructions of cultural identity. The most frequently referenced play in the collection, Damascus, reflects the increasingly tense European-Middle Eastern tension post-9/11 and the Eurocentric construction of an inappropriate or even offensive cultural identity.

Marilena Zaroulia’s essay uses cosmopolitanism and ‘utopian performatives’1 and Derrida’s ‘hospitality’ theory,2 to explore the multiple identities, locations and difficulties of communication and how each dramatically-conceived society welcomes a stranger in San Diego, The American Pilot and Pyrenees. Charlotte Thompson takes this further into Greig’s ‘Transpersonal Dramaturgy’ in which repeated incidents related or experienced by different characters, or language passing between characters and into a chorus make it impossible to individuate characters and underscores ‘the polyphony of experience’. (109) Anja Müller engages with Greig’s ‘Cosmopolitan Stage Conversations’ through Casanova, Oedipus the Visionary, and Dr Korczak’s Example, all of which bring the historical and mythical central characters in to a new context endowing them with a transnational quality, subjects of what Appiah has characterised as a traveller’s tale.3 Dawn Fowler examines Greig’s ‘Conflict Spaces’ through an exploration of Damascus and The Miniskirts of Kabul, the latter written for the Tricycle Theatre’s Afghanistan project in 2009. Her concern is ‘the interpretation of transnational exchange between British and Middle Eastern characters through … conflict spaces’ and Greig’s development of cross-cultural understanding. (138)

Four essays offer a close reading of individual texts. Fiona Wilkie examines ‘Transport & Travel in Europe’, the way in which Greig uses the non-place, the disused railway station through which trains roar without stopping. Wilkie contends that the play is concerned with mobility, seen in stage directions as well as context, despite the inability of most of the the characters to move anywhere – in fact places on maps move more readily than people in this world. Peter Billingham gives a close reading of ‘Themes of American Military-Cultural Globalisation in The American Pilot‘. Greig’s language and characterisation in the play is striking prescient, given the play’s conception substantially in advance of the UK-US invasion of Iraq in 2003. Billingham has a criticism, however, that the characters and relationships are not developed as much as they might have been, and the ending may be seen as offering ‘a reactionary, sentimentalised, fatalistic resolution’ (179) to issues of history, ideology and the possibilities of political struggle. Sandra Heinen discusses the dramatic devices employed by Greig to ‘Stage the Intricacies of Intercultural Communication’ in Damascus. This play is set in another non-place – the foyer of a hotel. Greig uses the English-language textbook which is at the heart of the plot to reveal the limited and patriarchal Eurocentric view of the Middle East, which the local population find patronising.

Michael Raab discusses the reception of Greig’s plays in the German-speaking theatre. Greig now has 10 plays in German translation, although productions on German stages have had mixed success. Part of the reason, Raab contends, is his refusal to be pinned down to a particular style. Greig himself has commented on the difficulty in having non-conventional Scottish plays staged in London, but Raab is convinced that ‘this quintessentially European dramatist’ will get his moment on the German stage.

Perhaps the most immediately rewarding section of the collection is the commissioned interview with David Greig, by Mark Fisher, an excellent interviewer, who gives ample time to his interlocutor to explore his motivations and purposes. An interesting point Greig makes is that all Scottish playwrights have their own idiolect, which is a language that no-one actually speaks, praising Chris Hannan, Iain Heggie, Liz Lochhead and John Byrne for forging a unique language from English, Scots and dialect, which had allowed later Scottish dramatists to use whatever language was appropriate without having to prove their ‘Scottishness’.

In the final essay of the collection, Clare Wallace explores ‘Allegories of Otherness in Dunsinane‘, but opens the essay by referring to Greig’s own critical writings on his theatre, which he characterises as ‘Rough Theatre’: ‘to expose and explore what lies beneath, and to go beyond conceptual or imaginative default settings in order to produce some new experience of reality.’ (198) Dunsinane can be the prism through which contemporary conflict in Iraq and Afghanistan are viewed, particularly noticeable in the closing scenes, when Siward is urged to leave the Scots to sort out their own country and return home.

This is a very welcome addition to Scottish theatrical criticism, not only for the essays themselves, but also for the very extensive bibliography which affords an excellent reading list for the student of contemporary Scottish theatre.

Like Light on Dumyat, the first novel in Rennie McOwan’s series, The White Stag Adventure, re-issued by Rowan Tree in a new paperback edition in November 2017, is a thoroughgoing adventure story in the best tradition of Enid Blyton’s adventurous and resourceful Five and Seven, minus the very English middle-class notions and the lashings of […]