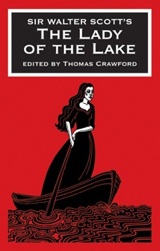 Ever since Sir Walter Scott’s The Lady of the Lake was a runaway publishing success in 1810, when it sold 25,000 copies, its publishing history reaffirms its validity and relevance as a text in demand. A search on the National Library of Scotland’s catalogue lists 145 copies of Sir Walter Scott’s The Lady of the Lake, from the first edition of 1810, to multiple editions right through every decade of the nineteenth century. New editions of the poem have continued to be published through the twentieth and the current century. If one browses through Amazon, one has a choice of editions in the past few years, showing how the interest in the epic romance has stayed alive, challenging any ideas of the interest in the poem having died out.

As we know, Walter Scott’s The Lady of the Lake was well ahead of its time in creating a phenomenal landmark in literary tourism for Scotland. To mark the 200th anniversary of what was, as the product description of the books says on Amazon, a ‘publishing sensation’, the Association for Scottish Literary Studies (ASLS) has brought out a bicentenary edition of the book in 2010, supported by Loch Lomond and The Trossachs National Park and the Scottish Arts Council. So what makes this new edition necessary and even remarkable today?

It is beautifully produced with an attractive hard red cover with an illustration of Ellen in her skiff, with a wistful expression, rowing on waves that reflect the cascades of her flowing hair, by the Scottish artist, Linda Farquharson. The map on the inside cover as one opens or closes the book, provides the information today’s reader needs to visualise the landscape that inspired Scott to write about the Trossachs and the country round Loch Katrine. The note on the text confirms that it is based on J. Logie Robertson’s 1894 edition, with the spelling of place names retained from Scott’s own usage. It is a scholarly edition with adequate footnotes and endnotes from the editor, Thomas Crawford’s earlier edition of Sir Walter Scott: Selected Poems (1972). Some of Scott’s own notes and that of his son-in-law, Lockhart from the 1833 edition have been included, making it an edition that will appeal to both researchers and the general reader, supported as it is, by its canto-by-canto endnotes.

Its robust hard cover and design give it the feel of an old-new book that one wants to hold and handle, unlike the old editions at the National Library of Scotland and Edinburgh University’s Special Collections, which are beautiful but fragile and need the careful handling that rare crystal sculptures demand. The 2010 ASLS offers an edition that a readership can confidently hold in their hands and possess.

Its aesthetic appeal is enhanced by Farquharson’s illustrations that capture key moments in the story, in what Alice would agree, is an ‘interesting’ book. The ones of Blanche of Devan depicting her in her ‘crazed’ wanderings, singing of her tragedy before her death and of Ellen at her Monarch’s feet, distraught and ‘suppliant’, give the two memorable women, both suffering in different ways from the loss of their love, an eminence in this story of a power struggle that affects the fortunes of four men, Roderick Dhu, Chief of the Clan-Alpine, James Fitz-James (James V), the king in disguise, James Douglas the exiled father of Ellen, and her imprisoned lover, a highland chief, Malcolm Graeme.

The ‘Foreword’ by the First Minister affirms the poem’s historic impact when it first appeared and its continuing validity as a work that expresses the Scottish ‘nation’ in its modern relevance.

The Lady of the Lake‘s appeal as a narrative poem remains in its masterful use of rhyme and engaging narrative descriptions, evoking the beauty of the landscape through a heady tale of uncertain and rapidly changing history as the idea of the nation is challenged, defended and confirmed in this eventful story. The pace of the initial canto of ‘The Chase’ offers the breathless magnetism of the storyteller’s art at the outset, in what combines the mystery of identity of a king and a nationalist exile, of political intrigue centred round a love quadrangle, which, combined with magic and the supernatural, keeps alive, as Douglas Gifford says in his ‘Introduction’ to the edition, Scott’s fascination with ‘the sheer otherness of Gaeldom’ (3). The narrative poem with its appeal of stunning landscapes and thrilling intrigue and a complex love story, predates, as Gifford says, films in technicolor, yet it has the visual appeal of a sensational racy story with its film-like vividness and an intensity suggestive of the moving edge of time. While readers have always been captivated by Scott’s romanticism, there is the underlying pragmatism of the romantic who is conscious of order replacing chaos, of an old life giving way to the new, of a past which is familiar but ‘barbaric’ and hence untenable, but recognized as one which will need to be replaced by a modern order, born of wisdom and the exigency of a nation. The poem sanctioned historic change and is symbolic of the inevitability of change as people look forward to a future that they want to have a role in arbitrating, albeit with adjustments but with a promise of renewal and sustainability. The Lady of the Lake is a story in verse that was written, as Scott had said, as a labour of love, and the ASLS edition is just that – a labour of love.

The Lady of the Lake by Sir Walter Scott is published by the Association for Scottish Literary Studies, 2010

Three of my five published novels prominently feature court scenes. The first of these, in The Fanatic, is the trial of James Mitchel in 1678 at the High Court of Justiciary for the attempted assassination of James Sharp, Archbishop of St Andrews, ten years earlier. The second, in Joseph Knight, focuses on the case of Knight v. […]