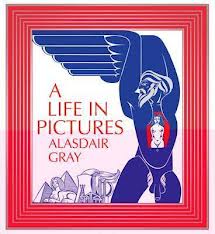 Alasdair Gray insists that his Life is not an autobiography despite the number of personal details it contains: a perspective initially surprising to the reader faced with such a vibrant documentation in visual and verbal form of the activities of a character called ‘Alasdair Gray’. Yet by the end of the book one acknowledges that Gray’s judgement is a true one, for his narrative is both more selective and yet at the same time more widely ranging than a traditional autobiography in the way it provides not only a portrait of an artist as a young and a mature man, but also a visual narrative of the various lives which interacted from time to time with his, as well as a recording of the environmental and cultural changes in his city of Glasgow in the years from the 1930s onwards.

Gray’s book begins with the life of the child which is told in a simple, straightforward, story-telling style and in a traditional first person narrative form accompanied by an evocative selection of black & white family photographs. The reader is pulled into this story of a creative childhood where, although there may not be much household money to spare, there is plenty of ‘doing’: of scraping out baking bowls with a wooden spoon after watching his mother baking; of listening to stories and his mother’s singing or watching his father make things for the house; of learning to draw and make stories himself, and finding out about the natural world via Will’s cigarette cards with their pictures of wild life, woods and fields, and through his father’s photography and involvement with the Ramblers Federation. The boy’s childhood is a therefore a ‘making’ childhood very different from the kind of ‘consuming’ childhood so prevalent today; and is thus representative in many respects of a mid-twentieth-century Scottish childhood in an intelligent, working-class family: the kind of family which produced many of the new working-class entrants to universities and art schools in the post-World War Two period. Where this family story is distinctive is in the impact the story-telling, singing, and especially the active absorption in images from books, had on the boy’s imagination. Gray comments: ‘I was learning that I could have what I wanted if it was in words, pictures or songs, which are the only dependable form of magic.’

The books which made most impact on the future artist’s early imagination through their illustrations were the twelve-volume Harmsworth Encyclopaedia and The Miracle of Life. He was also captivated by Joyce Carey’s The Horse’s Mouth and its idiosyncratic artist Gulley Jimson who continued with his mural painting even as municipal workers were in the act of demolishing the building that housed it (a detail that seems to prefigure the fate of many of Gray’s own murals): ‘This funny, high-spirited story persuaded me that making a fine work of art for people who did not want it was the greatest thing I could do.’ The Horse’s Mouth with its quotations from William Blake inspired him to discover Blake’s poetry and visual work for himself, something he found ‘huge boosts to mature free thinking’. Such ‘free thinking’ was unfortunately not encouraged at Glasgow School of Art in the mid-1950s: ‘Our teachers of painting thought Post-Impressionism was modern and barbarous’; their own work ‘mostly portraits and landscapes Monet might have painted had he been timid and Scottish, with an inferior grasp of colour and design’. On the other hand, Gray’s own work did not seem to attract fellow students or teachers: ‘Most people, fellow students included, would make only two remarks about a picture of mine: “Very interesting”, then, after a thoughtful pause, “you certainly put a lot of work into it”.’

As one can see from the illustrations in A Life In Pictures, Gray’s visual art does not conform either to what he considered the old-fashioned conventions of his teachers or to the early twentieth-century formal innovations of European artists such as Picasso, Braque, Matisse or the Scottish J. D. Fergusson. In a chapter devoted to his portraits, Gray describes himself as ‘an illustrative decorator whose technique owes most to great Japanese printmakers, Hokusai and Hiroshige’. He comments that such Japanese prints often lack ‘what Berenson called tactile values’, and admits ‘My own work also often lacks that’: an opinion that suggests that his visual interest lies not in the formal exploitation of the painting medium for itself, but as can be seen in his epic murals and many of his portraits, in a form of painting where story-telling and pattern-making are dominant. Thus in ‘The Temptation of St Anthony’, female and male figures, painted in a variety of styles, are placed vertically on the picture plane in a way similar to what is found in medieval art before the invention of perspective. These figures cluster around a wooden cross at the top of the picture while a game of chess is played by a skeleton and a large monkey in a mask at the bottom in an urban setting whose buildings suggest a mingling of New York and ancient Greece. And in the portrait ‘Snakes and Ladders’, a ‘Liz Lochhead’ character sits on a patterned carpet staring at a snakes and ladders board-game, while a cat turns its back on the scene, facing into a blank wall. Gray has proved himself to be a splendid book designer and illustrator—as A Life In Pictures itself shows—but his visual work is difficult to ‘place’ in the history of modern painting in the twentieth century.

One feature which confirms Gray’s comment that A Life In Pictures is not an autobiography is the relative absence in it of Gray the writer. He does at an early stage mention his attempt at a ‘Portrait of the Artist as a Young Scot’, and how ‘the first few sentences on paper proved that I lacked a decent prose style’. Yet at the same time the idea of the book ‘was growing and mingling with ideas for a modern Pilgrim’s Progress inspired by Kafka, as Edwin and Willa Muir interpreted him’. This comment seems to point strongly towards what we know as Lanark, the book that catapulted Gray on to the world stage; but in A Life In Pictures we have to wait until pages 204 and 210 to hear that ‘odd chapters of Lanark’ have been printed in Scottish International and that it has been completed and rejected by a publisher in 1977 before being accepted by Canongate in 1978. This was a fortunate acceptance, since it was the small-firm nature of Canongate that enabled Stephanie Wolfe-Murray to allow Gray the artistic freedom to design the book as a whole: a successful venture which set the pattern for Gray’s subsequent books. A Life In Pictures is the most comprehensive example of Gray’s outstanding talent as book designer, illustrator, and visual as well as verbal story-teller, with its rich accumulation of portraits, passages from mural works, still-lives, and cityscapes. It is a splendid companion to the Alexander Gray we already know as novelist.

A Life In Pictures by Alasdair Gray is published by Canongate Books, 2010.

Nation and Nationalism is the inaugural issue of the Neil Gunn Circle series by Whittles Publishing, a venture that proposes to introduce Gunn’s life and writings to a new generation of readers, while at the same time providing a bridge between academic criticism and a wider public interest. The choice of ‘Circle’ in the title […]