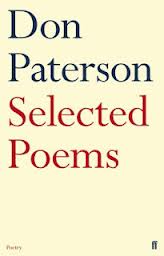 Don Paterson was born in 1963 in Dundee. He moved to London in 1984 to work as a jazz musician, and eventually began to write poetry. In 1993, Faber published his debut collection, Nil Nil, which won the Forward prize. In total, he’s published seven collections and three books of aphorisms. Paterson has won the prestigious T.S. Eliot prize for poetry twice. Other awards include: the Whitbread prize, and The Geoffrey Faber memorial prize. He received an OBE in 2008, and teaches poetry at the University of St Andrews.

His recently published Selected Poems, covers a remarkable career that spans twenty years, ranging from the half-dead Scottish towns and deserted football pitches he brings us to in Nil Nil, to the simpler cadences, and more introspective elegies that we witness in his 2009 collection, Rain.

Paterson is technically insightful, and writes with a violent and wicked imagination. His language makes use of both the vernacular and the formal, and disowns the idea of a poet having a singular voice. Here he spoke to The Bottle Imp about exploring the darker side of the unconscious, why he thinks poems are deliberately unstable statements, and why he’s not comfortable being labelled as a poet by profession.

What do you think is the difference between your earlier and later poems?

Well, you realise how much you have changed in the meantime. The big problem is not to edit earlier versions of yourself, because I think everyone indulges in this sentimental fantasy that they progress. This makes it hard putting together a Selected Poems—you have less sympathy for the earlier guy, and I found myself cutting him out. My editor didn’t let me.

Many of your collections seem to be ordered thematically, but I cannot imagine you write according to a theme, do you?

Most poets are naturally obsessive. Any book that you publish is just going to reflect your obsessions at the time. That’s really the only thing that gives it any thematic consistency. I’m really suspicious of the idea of writing to a ‘theme’. The few occasions where I’ve tried to do that, it’s involved me making up stuff I didn’t really mean, just to fill the gaps.

How often do you write?

About eight to ten poems a year, all of which come very slowly. But there’s no hurry with this stuff, no deadlines—you might as well try and get it right.

Your poem ‘The Big Listener’ was highly critical of Tony Blair. Did it receive any attention in political circles?

Just a deafening silence, as expected. Politicians aren’t big poetry readers. It’s not the way to trouble the establishment, unfortunately. Thomas Hardy once said that “if only Galileo had put his discoveries in verse, the Inquisition would have left him well alone.” Maybe poetry is better suited to subversion than assault.

Do you believe in our present culture a political poem cannot connect with the national consciousness?

The responsibility that poetry once had to speak about these things has been delegated to other verbal media. That’s not to say that I don’t think it can sustain that kind of statement. It just hasn’t been expected of poetry recently—but there’s no reason why it couldn’t embrace that again.

Is there too much emphasis placed on “understanding” a poem rather than allowing the reader to indulge in language?

I think you can do both. But the bottom line is that poems are deliberately unstable statements, where you’re supposed to see yourself in the thing—if the poem is any good. I’m very wary of the way poetry is taught at the moment in the form of critical analysis where people are trying to work out what the poet means, as if the meaning is something that the poet is trying to deliberately withhold. It says what it says. It’s likely saying something original or difficult, in the only way it can. So just read it again.

Do you find yourself surprised at the darker elements that arise out of your poems?

It wouldn’t do you any good to start thinking about where those dark ideas come from. The unconscious is the unconscious for a good reason. I know a poem is going in a particularly dark direction if I start to over-structure it, and make it almost impossible for myself to write. I’ll make the rhyme scheme or the form next to impossible. And it’s a sort of unconscious signal to myself that there’s something I don’t want to deal with.

Are poems that explore themes like fear and violence cathartic?

That’s what poetry is for: to offer you some assuagement, when you have that thing that you can’t resolve, or can’t make any sense of. When you know these desperate things are somehow connected, but you cannot see how—poetry is a means of working it out. With that comes some meaning, and with that some consolation.

What attracted you to undertake the project ‘The Eyes’, where you reworked the poems of the Spanish Poet, Antonio Machado?

I think you only embark on these projects because there is some kind of perceived spiritual kinship, and the more I read Machado, the more I was thinking, yeah! That’s exactly what I think. I don’t think of them as translations so much as versions—they sometimes take outrageous liberties with the original. I do believe that the song is everything. In poetry sound and sense are the same. So if you can’t make a song out of it, then it’s probably not true. And sometimes you have to change everything to make a song. It’s about trying to keep to the spirit of the original, as you perceived it, and sort of reincarnating it in another language.

Did you see yourselves as poles apart from Machado, or did you find a connection with him?

You wouldn’t go near another poet in that way unless you felt you shared something quite deep with them, or felt you could at least learn or steal from. In Machado’s case, it was all about exploring ideas of the void and the nada, and that whole Spanish tradition of via negativa. St John of the Cross, all that.

You are interested in how words relate to each other. Could you elaborate on that idea?

Ted Hughes used to talk about this: he said he knew a poem was finished when every word was listening to every other word. I think there is a kind of a harmonic level, as well as a melodic level about the way the words work in poetry. They work through their connotations as much as their denotations, the things they imply, and their whole history as words. You’re talking about a machine of words, that’s maybe constructed at a level of interrelation that’s higher than the prose equivalent. I do tend to think about it as a musical analogy: there is harmonic depth, which gives multiple, layered, vertical meaning to the thing, as well as the melody of sense on the top. It comes about through what happens to words when you let them draw senses from each other, not just the frame the poet or subject imposes.

Your poetry is interested in experimenting with different voices—does that give you more imagination than if you were writing a poem in the first person?

I don’t think about them as different voices, because I don’t really believe in the voice anyway. I think we all have multiple voices and we try to honour them as best as we can. You choose the best one for the occasion. Or sometimes a poem creates one from the raw material.

So is it a different voice every time you sit down to write a poem?

It’s not infinitely various, but I think there are real mistakes in thinking you have something called “your voice”, because that just leads rapidly to self-impersonation. Then you just sit down to write another poem that sounds like you, and that’s just self-censorship, and it leads to terrible repetition. The big danger is that people fall in love with their own voices. I’m sure I do too, but I try to avoid it.

How influential were the Irish poets (Heaney et al.) to your poems?

All the poets of my generation were hugely influenced by that unbelievable constellation of talent that came out of Ulster in the 1970s. Everyone I knew studied these folk avidly: Mahon, Muldoon, Longley and Heaney especially. The main things we derived from those poets was the importance of the deep integration of the poem’s elements, and a well-attuned ear. These are some of the best poets writing in English, simply because the level of musicality and the lines that they write. It’s just unbelievable that they would have all turned up at the same time.

I think that’s true with most poets. I know only one or two who are comfortable with that. It’s mainly because it’s not a job of any kind. It’s just something weirdly synaesthetic thing you do with words, and is probably symptomatic of a broader pathology. I think poetry is more of a diagnosis than a calling.