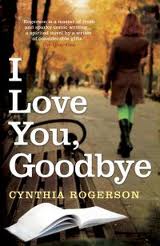 One of the main characters in I Love You, Goodbye is a Pole, observant and thoughtful Maciek, a philosophy teacher now living in a caravan in Scotland and working as a pizza maker (‘Who would think that pizza cause such excitement?’) after an ill-starred relationship at home in Poland. Another, Ania, a marriage guidance counsellor, has a Polish father, much as I do myself. But this is essentially a novel about the elation, pain and downright confusion of love, marriage and familiarity. It is also a novel about losing and letting go, about growing up and growing older, all set within the pressure cooker environment of the kind of small Scottish town I know so well, where everybody knows everybody else’s business and privacy must be fought for. It is also — although none of the quotes and cover details seem to touch on what for me was a vital part of the story — a singularly astute exploration of what it feels like to be an incomer in such a community.

I enjoyed it enormously. It is eminently readable and yet with an internal complexity that must have involved an enormous amount of work. It feels effortless in the reading but like the proverbial swan, the writer must have been paddling like mad underneath. The story covers some nine months in the fictional town of Evanton, from September to May of the following year, and is narrated through various different — and strongly characterised — voices: Polish Maciek, Ania — very faintly foreign as though the intonation of her narration is not quite Scottish — Scottish Rose, who has had an affair and is considering divorcing her husband Harry, and Sam, their teenage son. There are other characters, of course: Harry himself, Rose’s lover, the visiting Polish schoolgirl Sam fancies, Mr Mackenzie who runs the caravan park. But the main protagonists emerge through their individually narrated but carefully enmeshed stories, as clear as day.

Rogerson achieves at least some of this through the dialogue which is perfectly realised from the precise confidence of Ania (a confidence soon to be eroded by the coup de foudre of love) through the believable teenage voice of Sam, to the ‘Polishness’ of Maciek’s thoughts. I confess that just at first, I was taken aback by this. Maciek ‘thinks’ in a Polish accent:

It bothered me just a little to begin with. But I persevered and decided that it worked very well indeed, partly as a contrast to the other characters, and partly because it imbued Maciek with that very Polish, energetic and passionate quality which is so hard to translate into English. It a brave thing to do but I think Rogerson pulls it off admirably.

All through the novel, the present tense narration lends a sort of visual immediacy. You can see the place and the people. The town itself, Evanton, becomes a character in its own right. Each month has its own small prologue which is not just about the town, but about the people living there. Who narrates this? If it is the author herself, she is remarkably unobtrusive, and each of these short pieces works well in setting the scene for what is to follow, as well as reflecting much of what the whole novel is about:

Each of these monthly prologues serves to emphasise how lives within small towns are connected by a hundred small threads: people know all about each other. What affects and influences one can have unexpected consequences for others. So much urban Scottish fiction seems set on exploring disaffection, disengagement. But in rural and small town Scotland, it can be the strong threads of connection that pull us this way and that and it is refreshing to find this phenomenon so powerfully evoked as it is here.

Like many Scottish towns, Evanton has absorbed this new wave of European incomers more or less without complaining, although there are some disturbing moments suggesting undercurrents of bigotry. And it seems to me that this too is what the novel is ‘about — the potentially disruptive force of what in Scotland is often known as the ‘interlowper’ — as much as it is about love and the ways in which our lives are inextricably intertwined with those of our fellow human beings. I sometimes think the Scots have a fine conceit of themselves as tolerant and welcoming — and this is largely a true picture. But there is also a balance within small communities which can very easily be upset, and Rogerson seems to me to be adept at exploring how such places walk a fine line between acceptance and rejection, between tolerance and prejudice.

The novel ends in spring, with the wonderful but exhausting light of May in Scotland:

Without giving anything away, let me conclude that this is a beautifully written and moving novel, which ends with hope for a future which just possibly may be ‘full of light’.

I Love You, Goodbye by Cynthia Rogerson is published by Black and White Publishing, 2012.