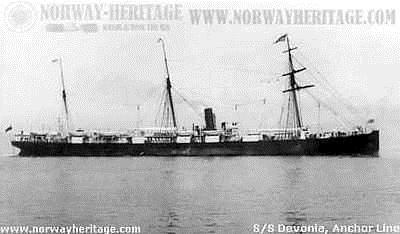 Stevenson’s friends and family were united in their hostility to The Amateur Emigrant, his account of transatlantic and transcontinental ‘slumming’. His father found it so offensive that it was withdrawn from publication at proof stage, in 1880; the first part of the work was never published in Stevenson’s lifetime. The work was published in bowdlerized form in 1895 and since then has rarely been available in the form in which Stevenson composed it. The text has also suffered critical neglect, perhaps because its Zolaesque naturalism and provocative social commentary challenge conventional understandings of Stevenson’s passage from early romance to mature realism. As my work on the of The Amateur Emigrant progresses, I have been considering why the work caused so much consternation to Stevenson’s contemporaries.

The Amateur Emigrant charts Stevenson’s journey from Scotland to California in 1879 in pursuit of Fanny Osbourne, an American woman who was in the throes of arranging her divorce. Cut off from his family on account of this unrespectable romantic alliance, Stevenson travelled not only out of his country but out of his class. His desire to travel steerage class across the Atlantic, rather than the more suitably middle-class saloon, was motivated by curiosity as well as financial necessity: he professed himself ‘anxious to see the worst of emigrant life’.1 In the end he paid two guineas extra to travel ‘second cabin’ and have a writing table. He travelled incognito as a working man, ‘pass[ing] … for precisely the average man of the steerage’ (56). The 11-day steamship passage to New York, aboard the S.S. Devonia, was followed by a transcontinental rail journey, first by a regular train to Council Bluffs, Iowa, and then by a designated emigrant train on the Union Pacific Railroad to San Francisco.

Stevenson clearly relished travel as enabling him to cross borders of selfhood and class as well as country: noting that he was not only ‘travelling out of my country in latitude and longitude, but out of myself in diet, associates and consideration’, he savoured his ‘novel situation in the world’ (55). But the text also betrays tensions within Stevenson’s identification with the working classes, demonstrating the limits of his liberal sympathies. He lambasts the snobbery of saloon passengers who take a sightseeing tour through steerage, describing their ‘little gracious titters of indulgence, and a Lady-Bountiful air about nothing, which galled me to the quick’, and imagining, when they had returned to the saloon, ‘how wittily they would depict the manners of the steerage’ (22). The saloon passengers’ voyeurism, however, subtly recalls Stevenson’s own curiosity about ‘the worst of emigrant life’. For all his attempt to identify with the steerage passengers, he is at pains to distance himself from them. When he realizes that a brass-plate distinguishes second cabin from steerage, he records his flattered vanity with disarming honesty:

The joke here is partly on himself, but it is also partly on the working men who fall for Stevenson’s imposture. He takes a wry pleasure in the hoax, attributing his shipmates’ failure to recognize his true status to dullness; there is a sense that the readers at least will recognize his native gentility.

Stevenson’s negotiation of conflicting myths of emigration also suggests that his identification with the working classes was equivocal. Initially, his treatment of emigration appears subversive, as he discredits the heroic pioneer myth as a ‘great epic of self-help’, fuelled by children’s adventure tales (8, 70). The reality of emigration is much bleaker, with the emigrants the victims of economic circumstance: ‘closed factories, useless strikes, and starving girls’ (9). Underlying this sympathetic vision, though, is an opposing narrative of inborn degeneracy:

Here, Stevenson draws on late-Victorian degenerationist rhetoric to represent emigration as the outcome of innate weakness. Indeed, he condemns emigrants’ demand for revolution as misguided, demonstrating a middle-class fear of militant, organized labour. As Lawrence Phillips suggests, Stevenson discredits his fellow emigrants’ social critiques by figuring them as displacements of their own moral failings.2

But if Stevenson’s narrative tends towards such politically conservative ends, the question remains: why were his friends and family so shocked? My research into Stevenson’s contemporaries’ reactions, and into the work’s complex textual history, suggests that the narrative’s unsettling effect was rooted in its preoccupation with bodily experience, dirt, and physicality. The objections advanced in letters and proofs emphasize the breaching of bodily boundaries between classes and, closely related, the boundaries between different genres of writing. Stevenson’s publisher Kegan Paul and literary agent Sidney Colvin both object to depictions of squalor, particularly ones inflected by a democratic rhetoric that seeks to erase social distinctions. The proof corrections suggest anxiety that Stevenson’s work was journalism rather than high literature: Paul protests against passages which ‘seem newspaper like in style, and not worthy of R.L.S.’.3

The cuts made—by Stevenson and Colvin—before the 1895 publication of The Amateur Emigrant also intimate the contentious nature of the work’s representation of bodily equality. First of all, the provocative accounts of dirt and disease were excised. They had certainly made for uncomfortable reading: the manuscript describes the steerage ‘pens’, each containing ‘sixteen live human animals’, and comments that ‘M. Zola would here find an inspiration for many pages’.4 Stevenson’s discussion of his own trouble with scabies is similarly excised, pointing to concerns about maintaining the fiction that dirt and disease were associated with the working classes alone. In the manuscript, Stevenson’s sufferings are described in excruciating detail, and are insistently linked to questions of class. Stevenson represents scabies as a democratically contagious disease, thriving in the unhygienic conditions of emigrant travel, and infecting passengers regardless of rank. A New York chemist diagnoses a liver complaint because he cannot believe that a gentleman could suffer from scabies: as Stevenson observes, ‘Perhaps he had moved too exclusively in elegant circles; perhaps he was too noble-minded to suspect me of anything disgraceful’ (ms).

The bodily equality engendered by Stevenson’s experiment in slumming thus jeopardizes his detachment from his object of study—in ways that seem to have been deeply disturbing for his middle-class contemporaries. It suggests the troubling instability of class distinctions. Once the physical markers of class are erased, what remains of one’s middle-class identity? When his shipmates fail to penetrate his incognito, Stevenson is disquieted but can only suggest they observe his uncalloused hands: he can think of no more stable or innate sign of gentility. Class identity emerges as precariously external, superficial. Despite the attempts by Stevenson’s narrative persona to preserve distance from his fellow travellers, then, the emphasis on the body gives the narrative a subversively egalitarian edge.

The textual work on which this article draws was completed while I held the 2010 Frederick and Marion Pottle Fellowship in British Studies at the Beinecke Library, Yale University. I would like to thank the staff of the Beinecke Library for their expert help; unpublished material from the Stevenson Collection is reproduced with thanks.