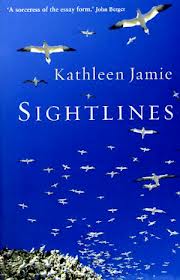 Sightlines, Kathleen Jamie’s second collection of essays and pieces about the natural world, came out in April this year. The reviews are already out, and they are—with no surprise at all, given the respect around in general for her poems and prose—the verdict of fully paid-up Jamie enthusiasts. To read is to admire and to envy: representative, and certainly the most endearingly fanboy of the reviews I’ve seen, was Nicholas Lezard’s confession that after a specially gravity-defying passage, ‘I put the book down again and thought: “I wonder if I would actually kill to be able to write, or think, like that.” It’s like this pretty much all the way through.’1

In the interests of full disclosure, I’m also, quite clearly, writing as a fan. In this context, disinterest is not as rewarding a read as full immersion. I first read ‘The Queen of Sheba’ in an august research library where graceless and distracting snorts of delight were out of place, so please forgive me if these comments are the equivalent distraction to your own disciplined reading. I’ve since talked about Kathleen Jamie’s poems with young students, some of whom found her poems in various ways uncompromising or difficult; and subsequently with groups of general readers not in formal education, who were as it happened swifter to make the distinction between a style that’s difficult to read and a style that is easy to read but harder to describe. And it’s been readers who said they initially found her poems tough who have been most fannish in their recommendations to the others of Findings (Sort Of Books, 2005) and of this new book. And I sympathise with those students: it’s easy for me to enthuse, but not so easy to describe why her writing is so glorious that you should enthuse too. As she writes in crisp self-admonishment, if you want to see wonders of nature all around you every second, ‘all you have to do, girl, is get your foot out of your eye’. Yes. Well. My foot is firmly in my eye: and so you’ll need to turn to ‘Magpie Moth’ to find the funny and profound context for that.

Sightlines is several kinds of book. For plenty of readers, it’s going to be a guidebook—not providing details of sailings for St Kilda, but a guide to what’s important in Jamie’s world and a reassurance, if it’s needed, that the knots in the stripped-back wood of the poems really are there in the interests of directness and record, they really are how her language shapes things. ‘How rarely we stand still for an hour, watching,’2

And it’s also a book about ambition. Not simply about the ambitious reach of travelling to the edge of the known—travelling to Rona, or standing on deck as a vessel edges through polar ice-floes, or looking at the topography of cancer cells. It’s equally writing that’s ambitious about making a tangible reality out of things, places and ideas that are at their most imposing or frightening exactly because they are transient. You’re not in for a lulling nature book, yearning for the historical gloss of Gilbert White or Martin Martin (she’s certainly respecting and quoting their work, but not recreating). If you want moments of stillness and isolation, of course, there’s plenty to pick from: a passage watching icebergs as night falls will knock the socks off anybody wanting their fix of the sublime. But her point is that, just as ‘nowhere is truly wild or abandoned’, there’s also no appreciation of stillness or isolation without the possibility of ‘acid burn at my sternum, taste of blood, tussocky earth and sky flashing, and my heart pounding’.3

Where it’s necessary to use brutally efficient language, as in that hell-for-leather run across Rona, it’s in order to give the writing the same compelling speed of the killer whales that the watchers are trying to keep in sight. And the whales come to life not with visual images of natural majesty, but the shock that when they blow they sound ‘low, regular and industrial, like a Victorian machine’. Satanic mills won’t be uninvented just to suit our ambitions for nature, or for nature writing. But trying to understand the natural world in terms of the man-made won’t offer us any easy parallels (or easy writing) either: ‘I thought ‘we are just meat,’ she writes of watching a post-mortem, ‘then called it back. Flesh, bodily substances, colons and livers and hearts had taken on a new wonder. If you had to design a pump or a gas-exchange system or device for absorbing nutrients, you would never, ever think of using meat.’4 There are plenty of ways I would try to imagine a post-mortem and how it shocks the observer with the majesty of the natural world. But I could never, ever think of using ‘meat’. That’s not to say that similes are discarded in these pieces at all. There are plenty of propositions of how to substitute a thing we do know for a thing we don’t know and so try to make sense of it. It’s just that there also plenty of reminders that simile and metaphor don’t offer control. In ‘La Cueva’, the human metaphor of the cave with its ‘iron-red’ walls,’like the inside of a cranium’, is instantly flipped inside-out, ‘as though the cave were dreaming us’. Who knows if a non-human intelligence might not equally watch us in search of equivalent patterns in our behaviour, like the seal that the humans see watching them rather than the oncoming killer whale.

Pathology and taxonomy are more favoured words than simile or metaphor in these pieces. But although they’re not offered as any more legitimate or effective a tool for human regulation of nature, they’re still markers of human faith and ingenuity, all the more worthy of wonder because they are such tiny tools to try to preserve all the creatures and habitats and insights that slip through our grasp. The ways in which fascinated humans try to map and record and observe, whether it’s the deterioration of archaeological sites, the development of bacteria, or the vast, orderly sculpture of whale skeletons lovingly preserved in Bergen, are in these pieces turned into a new subject for nature writing. Human methods of order and preservation suddenly seem as touchingly, beautifully organic and fragile as hearing a steam-engine speaking from a whale. The fact that much of what is observed is unobservable, or inexplicable or utterly transient, is in Kathleen Jamie’s hands the contradictory powerhouse of wonder.

Human conversation in this book is just as incomplete as conversations always are: humans very unsatisfactorily don’t usually speak in rounded periods with well-formed apercus, they talk in half-sentences and jerks of the head. The evidence of the senses and the imagination just streak ahead of what we can capture in words. And so this is ultimately a collection of pieces about relishing the unfinished, and about finding resolution in incompletion. There are patterns and recurrences and flashes of knowledge and recognition you can reach out to try and touch; but the only things you can know and hold and observe are the dead things, ‘beautiful and sad and complete’ like the whale’s ear bone exhibits described in ‘Voyager, Chief’. In the strangely happy, final words of ‘Wind’ the last piece in the book, ‘The wind and sea. Everything else is provisional. A wing’s beat and it’s gone.’

Sightlines by Kathleen Jamie is published by Sort Of Books, 2012.

‘All One Breath’ by John Burnside

Although it’s wary of systems that display ‘perfect specimens, the finished articles’, All One Breath is a fully realised guidebook to coming of age as an artist. Of course John Burnside’s art has been consummate for a significant time already; this book feels his most explicit yet in letting the reader in and describing how […]