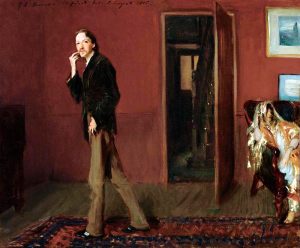 In a perceptive essay published in 1911 Vernon Lee (Violet Paget) refers to the changes in tense in Stevenson: they are, she says, ‘dimensional movements in time, and their variety and intricacy enlarges it, as variety and movement in space enables us to feel an object as cubic’.1 This interesting observation captures an important aspect of Stevenson’s mind-style which deserves further study.

For Stevenson, the world was a maze without a centre,2 and more than that: a ‘changing labyrinth’, in which ‘the very essences are fleeting as we look’, in which the observing subject is part of the very same flux: ‘Times and men and circumstances change about your changing character, with a speed of which no earthly hurricane affords an image’.3 And, as we shall see, not only ‘character’, but also perception and consciousness are never stable, so we never see reality from a single immobile point and things are seen in succession as near or far in space or time, as child or adult, subjectively or objectively.

(Stevenson’s consciousness of living in a flux of impressions was perhaps even expressed in his body in constant movement, rapid gesture, changing expression and animated eyes.4 In his 1885 portrait, John Singer Sargent, creates a restless composition with multiple points of interest, reflecting the writer’s own constant movement and intensity of being.)

Stevenson’s attempts to represent such unstable, constantly varying perception, can also be seen as serving another purpose: like the ‘jump cut’ in the cinema, his sudden changes of viewpoint, by surprising the reader, also call attention to the act of reading.

Perhaps Stevenson’s most extensive traditional set-piece description in stopped time from a single point is his description of the view from Calton Hill in Edinburgh: Picturesque Notes. It is overtly signalled as a ‘scene’, ‘a view’ and we get a progressive description (mixed with history), marked out by adverbial phrases ‘upon the south… upon your left. Upon the right… On the north…’. But then, unexpectedly, he says that the reality of the observer is quite different:

No longer like a painting, the view is now a changing series of impermanent perceptions. Indeed, the ‘multiplicity’ is too much to take in, and he continues with a series of disparate details, far off but seen suddenly close too, like a leaping zoom, undermining an idea of a simple stable viewpoint.

In a passage of the walking tour of the Chiltern Hills described in ‘An Autumn Effect’, Stevenson analyses another strange personal experience of shifting perspective when his path through the hilltop woods allows only occasional glimpses of the plain below, seen now far and then near: ‘little scraps of foreshortened distance, miniature fields, and Lilliputian houses and hedgerow trees would appear for a moment in the aperture, and grow larger and smaller, and change and melt one into another, as I continued to go forward, and so shift my point of view’.6 Here things lose reality and it is the only changing act of perception that is central, within a state of heightened awareness.

This loss of permanence and reality gives things a hallucinatory quality like that of the feverish visions of childhood that Stevenson describes in ‘A Chapter on Dreams’, when ‘the room swelled and shrank, and his clothes, hanging on a nail, now loomed up instant to the bigness of a church, and now drew away into a horror of infinite distance and infinite littleness’.

Time is also seen in this fractured and kaleidoscopic way. In the fourth paragraph of ‘A Modern Cosmopolis’ he describes the growth of San Francisco:

Here, we see shifting focus that is not only spatial but also temporal: from the period of living memory (in which the expansion of San Francisco has taken place), to a few years ago (when I dined there), then back to a period before then (the experience of the fellow-diner). Even the apparently irrelevant detail ‘then newly married’, could be to indicate that the witness was young, so his experiences were comparatively recent, but (since people can marry at any age) it could also serve to add another element of temporal relativity, back from the dinner to the recent wedding day, for the mere variety of another small temporal shift.

This shifting viewpoint is perhaps most common in the essays, from which the examples so far have been taken, because the essayist sets out from the start to view phenomena from different points-of-view, to be open to impressions and the perceptions of the moment. (And we might also mention in passing the way the subject of Stevenson’s essays often fluidly varies between ‘I’, ‘you’, ‘he’ and ‘we’.) However, Both Jean-Pierre Naugrette and Penny Fielding have also noted the constant shifts, in the Child’s Garden of Verses poems, between the voice of the child and that of the remembering adult, and Fielding has noted how temporal and spatial focus shifts back and forward in poems like ‘To S. C.’ and ‘The Tropics Vanish’, and how, in the latter, ‘the [spatial] focus expands and then contracts again’.7

It is possible that such shifting viewpoint is rarer in the narratives. One possible example is the scene in The Master of Ballantrae, where Mackellar is sitting near James Durie on the violently rolling ship:

The Master tells him a story cunningly designed to tempt him, but Mackellar is already mesmerised by

The situation here is not only of fascinating mirror-like reversals, but an additional spatial situation where the shadow is thrown beyond the ship and an apparently independent line of the sea leaps up—unexpected movements that seems closer to our idea of sudden shifts of perceptive focus.

Stevenson seems never to have explicitly theorized about such shifts in viewpoints and focus, but we can see it as part of his basic view of the complex and changing nature of all phenomena, including mental phenomena. Perhaps the nearest we get is his comment to a newspaper reporter in 1893, ‘there are many consciousnesses in a man. I have no doubt about it—I can feel them working in many directions’. 9

Thirty years ago, Robert Louis Stevenson was effectively excluded from the literary canon: not mentioned in standard anthologies, most of his works out of print, and books and articles on him a rarity: the RLS Website has five titles of studies for the 1950s, eight for the 1960s, twelve for the 1970s. The situation has […]