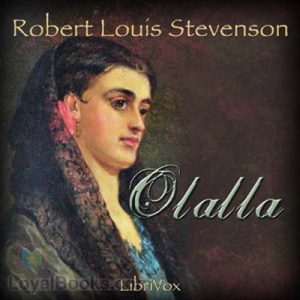 Robert Louis Stevenson’s vampire novella ‘Olalla’ is one of the great overlooked works of 19th century Gothic fiction. Published as a Christmas ghost story in 1885 (a year after ‘The Body Snatcher’ and a few months before The Strange Case of Dr Jekyll and Mr Hyde) it has been patronised and underrated by most commentators — not least by its own author. In his 1888 essay ‘A Chapter on Dreams’, Stevenson dismisses ‘Olalla’ as a ‘not very defensible story’2 in which he struggled to fit his original vision—which took the form of a dream—into the framework of a conventional narrative. Damning of his own efforts, and of his (admittedly weak) ending in particular, Stevenson consigned his story to more than a century of neglect by critics and readers.

Strangely enough, ‘Olalla’ has benefited but little from the obsession with all things vampiric that marks our era of Twilight and True Blood. A far more turgid and uneven piece of prose, Bram Stoker’s 1897 novel Dracula is pored over today with a reverence that is normally reserved for Holy Writ. The soft-core lesbian bloodsucking of Sheridan Le Fanu’s ‘Carmilla’ (1877) has won a new and appreciative audience among feminist scholars. Meanwhile, a genuinely artful and ambiguous work like ‘Olalla’ is left to languish unread on the back pages of a few Stevenson anthologies.

It may be that ‘Olalla’ is simply too ambiguous—too teasing and too withholding, perhaps—to win the acclaim of a mainstream Gothic horror readership. If it resembles any ‘classic’ horror story at all, it is Henry James’s The Turn of the Screw (1891)—which leaves its reader similarly puzzled as to whether or not its horrors even exist and who, in fact, its monsters may actually be. The nameless hero of ‘Olalla’ is as disturbed (and disturbing) a figure as the nameless governess in the James story. The vampire curse that hangs over the heroine is as nebulous (and ill defined) as the ghosts that haunt the children of Bly House.

The story, in its unfolding, is simplicity itself. A young British officer, wounded in the Carlist Wars that shook Spain in the mid-19th century, goes to an isolated hacienda in the mountains to recover. There he falls in love with Olalla, the beautiful daughter of a decaying aristocratic family. She returns his love but decides (in the finest doomed Romantic tradition) that they can never be together. Her mother, it appears, is a vampire of some sort—albeit one who languishes all day, every day, on a patio in the sunlight. Olalla is obsessed by a fear that she, in time, will become a vampire too.

Of course, this summary leaves some key questions unanswered. (Is Olalla truly a vampire in the making? Or is she just a sad and much-deluded religious fanatic?) The story does so too, only more adroitly and at far greater length. The hero, much like Henry James’s governess, seems to be more than halfway complicit in the supernatural delusions that surround him. He is lured to this obscure retreat by his doctor’s promise: “The air of these mountains will renew your blood.”3 He has no sooner arrived than ‘I was out in the free air of heaven, taking vigorous exercise and healthily renewing the current of my blood.’4 At moments like these, a question may form in the reader’s mind. “Just who is the vampire, anyway?”

Before he meets Ollala, the hero forges a queer (and vaguely homoerotic) bond with her half-witted brother, Felipe. He describes this young man as ‘sometimes drawing his hand over my clothes with an affectionate manner of caressing that never failed to cause in me an embarrassment of which I was ashamed.’5 One day, the hero catches Felipe torturing a squirrel — and responds by torturing Felipe in a similar way. After this episode, ‘his original affection was changed into a dog-like, adoring fidelity.’6 This sadomasochistic flow of dominance and submission seems to prefigure the relations of Dracula with his male victims, Harker and Renfield. It carries over, perhaps, into the tormented liaison of Lestat and Louis in Anne Rice’s Interview with the Vampire (1976).

Also predating the entrance of Olalla is that well-worn Gothic cliché—an ancestral portrait that bears an eerie resemblance to the heroine and hints at her ambiguous identity. Staring obsessively at the canvas, the hero reflects: ‘while I knew that to love such a woman were to sign and seal one’s own sentence of degeneration, I still knew that, if she were alive, I should love her.’7 This plot device — lifted almost verbatim from ‘Carmilla’ — is never worked effectively into the narrative. Yet it survives in such 20th century films as Laura (Otto Preminger, 1944) and Vertigo (Alfred Hitchcock, 1958) and seems to lose none of its appeal.

So is the sweet and pious Ollala a potential vampire? Or is her story an elaborate fuss over nothing very much? Certainly, she shares qualities in common with her mother—who tries to drink the hero’s blood after he accidentally cuts his wrist. (An episode ‘inspired’ perhaps by Théophile Gautier’s 1836 vampire tale “La Morte amoureuse”.) Visually, she takes after the sinister portrait and shows many of the tropes by which female vampires were widely recognised in the 19th century:

This description reads like a muted echo of the mother, with ‘her copious copper-coloured hair’ and ‘the rich and broken hoarseness of her voice.’9 Red hair has been commonly identified with vampires in Central European folklore; it surfaces in 19th century portraits of literal vampires (Dante Gabriel Rossetti’s 1868 painting of The Lady Lilith) and also moral ones (Lydia Gwilt, the devouring femme fatale in Wilkie Collins’s 1860 novel Armadale). The hoarse and vaguely masculine tone of the voice lends an element of androgyny, reinforcing the link between vampirism and sexual threat.

Still, what truly disturbs in ‘Olalla’ is not the heroine, or any of the ways in which she is described. It is the profoundly vampiric bond she forms with the hero—and ‘he doubts it raises about his own precarious sanity. Meeting her for the first time, he writes how they ‘stood face to face, drinking each other in’ and she “followed me with her great, thirsting eyes’.10 This may, of course, be an accidental choice of words. What follows surely is not:

Are these the words of a potential victim in thrall to a vampire? Or are they the words of a vampire savouring its latest kill? In ‘Olalla’, the vampire (who may not be a vampire) and her victim (who is surely not a victim) are bound together in a complicity that makes us question the narrative itself.

‘Olalla’ ends, as vampire tales so often do, with the intrusion of a crucifix—in this case, a large wooden cross atop a nearby mountain. This cross does not repel the vampire, terrifying her back into the dark from whence she came. Instead, Olalla clings to it, hoping her Catholic faith will save her from the vampire curse. The hero ends his story thus: ‘when I looked back for the last time before the wood closed about my path, I saw Olalla still leaning on the crucifix.’12 One vampire may have sought sanctuary in the bosom of Mother Church. Another vampire—perhaps, of a less traditional sort—is making his way back into the world he shares with us.

Cloaking and Hiding: Dressing up in Robert Louis Stevenson’s ‘The Master of Ballantrae’

According to Jean Baudrillard’s now classic 1970s definition, a fetish is a fabrication. As a metaphor, an artifact and a social hieroglyph it is based on signs and appearances. The fetish attracts belief and worship. While some may have a phenomenal existence, the consciousness with which such phenomena are endowed is false, or deceptive. The […]

In a perceptive essay published in 1911 Vernon Lee (Violet Paget) refers to the changes in tense in Stevenson: they are, she says, ‘dimensional movements in time, and their variety and intricacy enlarges it, as variety and movement in space enables us to feel an object as cubic’.1 This interesting observation captures an important aspect […]

What is style? You do not have to be Fred Astaire or Audrey Hepburn for any man or woman to recognize it in the other in a heartbeat. Nor do you have to be a German or Italian designer to pause before a car shimmering with beauty. Yet try and define it, especially when applied […]

In 2008 The Carnegie Trust for the Universities of Scotland awarded Professor Linda Dryden, Director of Edinburgh Napier University’s Centre for Literature and Writing, a grant of £34,500 to develop a website for Robert Louis Stevenson (RLS) in collaboration with the Universities of Stirling and Edinburgh. The team appointed a Research Assistant for the website, […]