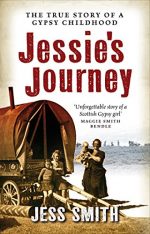 During the early summer of 2011, while revising the Concise Scots Dictionary, I was searching for a word I knew to be of Traveller origin. I was searching The Scottish Traveller Dialects by Jess Smith and Robert Dawson, an excellent source for words used by Travellers1 — but one which is arranged in the form of informant lists without definitions or grammatical information, which limits its use as a resource. It occurred to me that it would be very useful for my own work to rearrange this information into a single alphabetical list, and as I worked on compiling it, I came across other modern and historical sources which would very usefully augment the original material. It soon became clear that this work had blossomed into what would become a fully-fledged dictionary.

The earliest historical attestation to the presence of Gypsies in Scotland dates from 1505, in The Accounts of the Treasurer of Scotland, in which James IV writes to the King of Denmark commending to him an ‘Egyptian’ named Antonio Gagino and asking him to provide ‘To the Egiptianis, be the Kingis command, x Franch crounis’.2 At that time, before Gypsies became the scapegoats of the settled population, royalty and clergy seemed to look kindly on these self-styled ‘Earles of Little Egypt’.3

In Scotland today, Gypsies and Travellers speak a mixture of different languages: Scots, Cant, Romany, Scots Gaelic, Irish Gaelic, Shelta (the language of Irish Travellers) and Beurla Reagaird. The latter is a form of Gaelic which involves backslang, for example the Gaelic for horse is capal which in Beurla Reagaird becomes lupac. Through the generations there has been a great deal of socio-linguistic contact between these various groups, facilitated, for example, through intermarriage.

One of the first scholars to recognize that the language of the Gypsies was rooted in other languages and was not just, as had been earlier thought, a language made up by the gypsies to fool other people (although this notion has persisted into modern times), was Heinrich Moritz Gottlieb Grellmann. Writing in 1787, he noted that gypsies were ‘an eastern people’ and goes on to comment: ‘[…] they [people within the settled community] do not seem to have considered, how extravagant a surmise it is, to believe a whole language, an invention, that too of people rude, uncivilized and hundreds of miles distant from each other. This opinion is too extravagant to employ more time to controvert it.’ He then goes on to trace much of the language spoken by European Gypsies back to ‘Hindustan’.4

The less well-known author Walter Simson was a collector of Scottish Gypsy Language in the early nineteenth century and was in correspondence with Sir Walter Scott. His findings were published and edited by his son James Simson in 1865 under the title A History of the Gipsies with specimens of the Gipsy Language.5 This work was not used as a source by the compilers of The Scottish National Dictionary nor by our colleagues at Oxford.6

My interest in the language of the Travelling Community began in childhood when I became friends with a Gypsy girl at primary school, and was exposed to words from her language. Linguistic contact of this type was not unusual in southern Scotland where there was a legal requirement for Gypsy children to attend school for a minimum number of days each year. In this way quite a number of Gypsy words were borrowed into the vocabulary of Scottish school children. These words often survive in Scots (where they have been lost elsewhere).

A typical example would be nash, a Romany loan word meaning ‘to leave, quit, flee’, which is defined in the latest edition of the Oxford English Dictionary (2003) as ‘obsolete Cant’ with the final attestation dating from 1832. The word survives in modern Scots, where the meaning has evolved into ‘rush, to hurry’, with enough evidence collected to warrant a new entry in the 2005 Supplement to the Scottish National Dictionary. The word also survives in Travellers’ Language, and in the forthcoming Dictionary of the Languages of Scottish Travellers I have defined it as follows:

There are many other words of Romany or Cant origin which have passed into Scots, which are not found in English. For example the noun peev or peeve, meaning an alcoholic drink or more specifically whisky; the verb peevan to drink alcohol; the adjective peevie meaning drunk intoxicated: “I’d be trash to fek okrie off her for she’s a peevie old manishi.” [I’d be afraid to take anything from her because she’s a drunken old woman.]; and peever, a drunkard. A further example of a Romany word which has passed into Scots is hirie, which now means ‘money’, but originally meant a half penny or penny, from hira, hirae, hirie. It is interesting to note that hiries is used in modern Edinburgh Scots to mean money in general. Its use was popularised by the Edinburgh author Irvine Welsh in his 1993 novel Trainspotting.

Travellers’ Perceptions of the Settled Community

Travellers, sometimes with good reason, viewed the ‘settled’ community with suspicion, as is exemplified in the following account by the Traveller author Jess Smith of her experiences while attending a convent school:

Given this attitude it is little wonder that Travellers and Gypsies did their best to hide from the ‘scaldies’ or ‘flatties’ as they called the house dwellers. The following examples from my book give a flavour of how Travellers saw the ‘country hantle’:

There are however, examples of words for people who took to the travelling life by marrying a Traveller or Gypsy, for example buck, a non-traveller man married to a traveller woman, a person who decides to become a traveller more generall, or someone with only one traveller parent: “Sandy learned the mouth organ from a wee buck gadgie [man].” There is also a buck union, a Traveller man who marries a woman from the settled population: “[…]and this close contact led in many cases to marriages, which were referred to by tinkers as buck union.”

Travellers also had their own names for towns, sometimes specific or sometimes more general, e.g. Beenvile for Glasgow (Compare this to been ‘fine, good, costly rich, gentle’), and baurie forest a large town (Compare to barry ‘big, great’ + forest which is possibly a development of Romany foros or vauros ‘a city’).

Historically, although there was sometimes friction between the two groups, very often they got along reasonably well. In former times Travellers and Gypsies were a very good labour force for seasonal work, for example working at ‘the berries’ alongside their Scottish neighbours:

Although there are still some people who continue with the travelling lifestyle, as a community they are much reduced. Fortunately, in the 21st century people are more tolerant of alternative lifestyles, and despite some continuing conflicts, by and large there is less of a divide between the two communities.

In this edited volume, Robert Lawson brings together scholars with diverse specialisms including phonology, syntax, lexicology and onomastics. Jennifer Smith’s Foreword sets the scene by drawing attention to the many varieties of language encountered in twenty-first century Scotland. The complex interplay of Scottish English, Scots, Gaelic and other languages presents scholars with a sometimes bewildering […]

Scots Word of the Season: Fankle

fankle v. to tangle, mix up; to become tangled; (formerly to trap, ensnare)       n. a tangle, muddle Fankle is a relatively young word in the history of Scots, first appearing in print in the poetry of Allan Ramsay in the eighteenth century. Although its older verbal uses are documented by the Dictionary of the […]