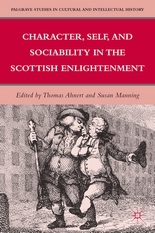 Sadly, early in 2013, Professor Susan Manning, Grierson Chair in English Literature and Director of the Institute for Advanced Study in Humanities at the University of Edinburgh, passed away unexpectedly. Scottish, Transatlantic and eighteenth century literary and cultural studies (especially the Enlightenment) have lost a formidable intellectual presence. It is understood that a monograph by Professor Manning on the topic of Self and Character in the Scottish Enlightenment is currently at press, and if the work by and edited by her and her Edinburgh colleague, Thomas Ahnert, collected in this volume is any guide then we will be in for a typical tour de force that richly advances our understanding of the cultural context of the Enlightenment in Scotland.

Receding into the past now are the ideas, promulgated by so many old-school Scottish literary critics such as David Daiches, that the Enlightenment in Scotland was a narrow and shallow cultural impetus synthetically promoting unnatural, and especially Anglo-centric, ‘values’ of thought and expression. Among others, the work of Nicholas Phillipson, Jane Rendell, Cairns Craig, Colin Kidd, Richard Sher, David Allan, Murray Pittock, and Susan Manning herself has transformed the scholarly landscape of Scottish Enlightenment studies over the past two decades. Nonetheless, that rich Enlightenment landscape that has been more fully charted is one that often demands a combination of literary, historical and philosophical reading skills, a package that has not yet permeated the more ‘popular’ sphere of the media. Old-fashioned, mid-twentieth-century ideas such as Daiches’s Enlightenment as part of a Scottish ‘crisis in identity’ retain currency among the chattering classes, and are not going to be entirely shifted anytime soon. Ahnert’s and Manning’s collection of essays belongs to that tough-minded conception of the Enlightenment as an elaborate set of both social and cultural connections and abstruse and theoretical ideas exchanged across a range of intellectual interfaces. And none of this is easy to distil into sound-bite ideas. The sociability among the literati of the centres of Scottish Enlightenment, in personal relationships, across periodical culture, their philosophical, historical and scientific works, as well as the fiction of the period all add up to an Enlightenment sphere of ceaselessly energetic cultural exchange rather than settled, monolithic cultural mind-set.

The wide variety of Scottish Enlightenment exchange conveyed in this volume is potentially bewildering when the reader is drawn to considering it in the round. Instead this is one of those very useful volumes whose essays are likely to be deeply drawn upon variously by subject specialists. Susan Manning’s own chapter provides a window onto romantic fiction, including work by Henry Mackenzie, Maria Edgeworth Walter Scott and James Hogg, suggesting that Enlightenment biography and history (operating in turn with philosophers David Hume, Dugald Stewart and others in the background) provides a large part of the under-felt to the development of romantic prose fiction with its tensions between personality, memory and other performances of identity against setting, landscape and period. I have read this chapter twice now, and hope that on a third reading all of these ideas might more easily begin to fall into place in my mind. It is not that Susan Manning is unclear; she is not and, in fact, writes with a kind of muscular elegance that hallmarks all her prose. I am also cheered by a conversation I once had with her, where she remarked to me that a part of reading happens after the event, sometimes when we are not even thinking of a particular text we have read but its ideas crop up apropos another text or we begin to see their application without that original text in front of us.

Other essays in the collection also entail for the reader a complex set of concerns. For instance, Thomas Ahnert’s treatment of moral education, character and religious moderatism, focussed on the sermons of Hugh Blair. This is a hugely refreshing piece amid the all-too-frequent discussions of Blair as culturally rather facile and urbane. He may well have been these things, but as Ahnert here shows he was also deeply engaged with theological debates in the context of Calvinist and more moderate Presbyterian conceptions of moral identity in eighteenth-century Scotland. Blair’s belief that moral development was potentially a very slow process re-situates him as a more profound theological figure than is sometimes thought. The suggestiveness of this essay is huge and one reaches its end wanting more. Like so many essays in this book, they are potential monographs in themselves. James A. Harris on ‘Reid and Hume on the Possibility of Character’ situate these philosophers’ ideas against classical philosophy, seventeenth-century civic debate and emerging eighteenth-century debates about political reform. The putting together of such a wide range of inferential readings by Harris to create such a persuasive reading is quite marvellous here. Like Harris, Stephen McKenna on Adam Smith’s thoughts on rhetoric and character, Anthony La Volpa’s reading of James Boswell in his juggling of polite and elegant discourse (especially the essay) and his energetic lifestyle often his own subject-matter, and Neil Vickers’ ‘Aspects of Character and Sociability in Scottish Enlightenment Medicine’ all profoundly demonstrate performative or practical aspects of Scottish Enlightenment culture which, at the same time, demonstrate its dynamic ‘character’ overall.

The Cambridge Companion to Scottish Literature, edited by Professor Carruthers and Professor William McIlvanney, is published by CUP 2012.

Character, Self, and Sociability in the Scottish Enlightenment edited by Thomas Ahnert and Susan Manning is published by Palgrave Macmillan, 2011.

Two anecdotes. Firstly, when completing an MPhil dissertation on Muriel Spark (1918-2006) in the late 1980s, I happened to be in my parents’ house one day with several of Spark’s books which I had on the dining table. Later that afternoon I overheard a friend of my father’s (similar stamp to pater: left-wing trade unionist) […]

The Devil in Scotland

What follows is a consideration of some of the more canonical moments in Scottish literature when the Devil features (or in some cases, as we shall see, fails to feature). Many more examples might be adduced, but those chosen here are selected not only for their prominence, but for the way in which they congregate […]