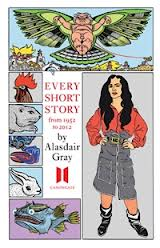 For those who are already familiar with Alasdair Gray’s short stories, this is a collection to be prized and rejoiced in; dipped into or read from cover to cover chronologically; explored and pored over. Almost every page reveals an unexpected delight of lexicon, illustration or typographical embellishment (sometimes all three together), and even the gloriously illustrated dustjacket (itself worthy of study) conceals a golden-thistle-tooled hardcover with Gray’s (slightly adapted) motto: ‘Work as if you live in the early days of a better world’. For any newcomers to Gray’s short(-ish) prose, the doorstop (934 pages) collection is a revelation which should lead them to wonder why he is not more universally known and celebrated.

In what appears to be an appropriate misleading of the reader, Gray’s epigraph from Samuel Johnson’s Rasselas has no immediate relevance to the work in hand, as it is a discussion of the purpose of the pyramids of Egypt, illustrated by some kind of fantastical three– or possibly four-headed creature overseen by a winged human head, but closer reading reveals that the pyramids have ‘been erected only in compliance with that hunger of imagination which preys incessantly upon life, and must always be appeased by some employment.’ This is surely Gray’s impetus for writing — that hunger of his imagination which demands to be fed by writing. In the invaluable Endnotes, Gray explains the origins of many of the stories and the means by which earlier novels, plays and poems were filleted and recast to produce the gallimaufry of magic realism, science-fiction, realistic socialist diatribes, fantastical fables, Borgesian tales, stories about writing, pastiches, which together create such a potentially better (and worse) world than the one we live in.

This is perhaps epitomised by the first story, ‘The Star’, where a boy finds a fallen star in his Glasgow tenement backyard, a planet the size and appearance of a marble, which Gray insists is a planet: ‘I did not want the reader to think it was just a cheap glass toy made magic by the fancy of a deluded child. I disliked stories equating magical worlds with delusion […]’ (p. 906). Similarly, the influence of James Joyce ‘had shown me how everyday happenings could be as much the stuff of fiction as miraculous fables’ (p. 907). This was the origin of the novel Lanark. The smallest stimulus can produce a tour de force, as a line from Ezra Pound’s Chinese Cantos: ‘Moping around the Emperor’s court, waiting for the order-to-write’ stimulated Gray to write Five Letters from an Eastern Empire, about a man trained from infancy to be a great poet, yet prevented from writing anything until the government told him what it wanted, which Gray described as a travesty of his university job as Writer in Residence at Glasgow University.

Gray’s stories, whether realist or fabulous, make considerable demands on the reader as he is very well-read and prone to quoting from literature, philosophy, history, science, medicine, and the Bible to illustrate parallels and progressions. Many of his stories involve protagonists or narrators who are forms of the writer himself, but he most successfully imagines himself into the magniloquent persona of Scots Renaissance aristocrat Sir Thomas Urquhart (1611-1660) in the huge and hugely entertaining and typographically challenging and adventurous ‘Logopandocy’, which seeks to evolve a perfect language to express all the world’s ideas. However, it should not be overlooked that many of these stories are laugh-out-loud funny — Gray has huge reserves of humour, irony and satire to entertain the reader.

Of all the anthologies collected here, the least ‘tampered with’ in its presentation here is the first, Unlikely Stories, Mostly. This collection demonstrates a broad range of literary influences from Johnson to Kafka, and contains amongst others the ‘Five Letters from an Eastern Empire’, the paired stories ‘The Start of the Axletree’ and ‘The End of the Axletree’, ‘Logopandocy’, and ‘Prometheus’, which includes loud echoes of Shelley’s magnum opus, Prometheus Unbound. It also contains my favourite early Gray story, ‘The Comedy of the White Dog’, which begins as a straightforward story about a group of 1950s pleasure-seekers only to turn into a weird sexually charged fable; for contemporary readers it may shine a peculiar and unsettling light on the character of Brian Griffin in the cartoon series Family Guy.

The stories from Lean Tales, originally collected with stories by James Kelman and Agnes Owens, opens with ‘The Story of a Recluse’ where Gray develops the full story from a fragment left by Robert Louis Stevenson, but at the same time discusses the nature of a story. We read these disparate parts separately and symbiotically, the latter subtly influencing our reading of the former. The collection continues through ‘Edison’s Tractatus‘, ‘Huff Harrington: A Tale Due to Kipling’, ‘The Marriage Feast’ (with its wonderful opening line: ‘I met Jesus Christ only once, at Cana, at some sort of marriage feast’), and concludes with shorter and increasingly aphoristic stories. The short story collection Glaswegians is adapted from the novel Something Leather, and introduces the characters June, Senga and Donalda, who enjoy a ‘pseudo-masochistic’ lesbian relationship stimulated by the design of a leather suit for June. The award of European City of Culture to Glasgow introduces the character of Harry, ‘A Distant Cousin of the Queen’, who begins as a bullied outcast in an exclusive but unconventional boarding school and develops into a world-renowned sculptor and artist whose ceramic ‘Bum Garden’ becomes the focal point of a major exhibition. Gray notes in untypical self-aggrandising style that chapters 2 to 11 of the original novel ‘are among my best stories in the realistic genre established by great German, Russian, Irish and American authors, French Maupassant, English Kipling and V. S. Pritchett, most of Chekov and Joyce’s Dubliners‘ and it is indeed intriguing to see the development of the characters through the various stories/chapters. In contrast to the Glaswegian dialect rendered conventionally in many of the other stories, those featuring Harry create a phonetically-rendered upper-class speech: ‘Glasgow once had the strongest loca govament tha was, outside London. It owned a huge public transport system, housing schemes, docklands and lots of otha things Thatcha is allowing it to sell […] howeva, they want to show they can do moa than just sell public propaty to private speculatas, so they have gone in fo Cultcha with a capital C […]’ (p. 501).

We can see here that Gray’s fantastic imagination, like that of the poet Edwin Morgan, is firmly rooted in his Glasgow boyhood. Gray’s stories are coloured by his experience of the transformation of the dismal, dirty, poor and overcrowded post-war Glasgow by the newborn Welfare State. As his protagonist in ‘The start of the Axletree’ is told to ‘dream the cure’, Gray’s stories introduce and develop dreams of possibilities for a better world, and the overwhelming tone is ultimately one of optimism.

With such a wealth of riches presented to the reader, it is a pity that this edition is marred by poor proofreading, particularly at the beginning of ‘Houses and Small Labour Parties’, which is badly mangled. Most are quite obtrusive and annoying typos; however, some of these are quite felicitous — notably ‘a garden-tap with a house attached’, and a reference to the Bible as a ‘scared book’. Gray quotes Sir Thomas Urquhart on the dust jacket: ‘Reverence the cheese-like brain that feeds you with these trifling jollities.’ I wish I had been able to attend the launch of the collection at the Glasgow Gallery of Modern Art, and had heard Gray himself discoursing in his inimitable way on this evidence of his life’s work to date.

Every Short Story by Alasdair Gray is published by Canongate Books, 2012.