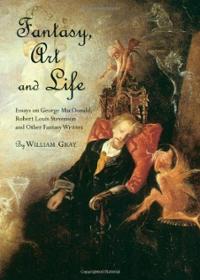 William Gray is Professor of Literary history at the University of Chichester, and Director of its Centre for Folklore, Fairy Tales and Fantasy. His previous distinguished publications include Death and Fantasy(2008), studies of writers such as George Macdonald, C. S. Lewis and JR Tolkien, a study of C. W. Lewis in 1998, a literary life of Stevenson in 2004, and much impressive work on the tradition of serious fantasy of the last century and a half.

In describing his volume as ‘essays on’ MacDonald, Stevenson and others, Gray here and elsewhere acknowledges that the chapters, rather than contributing to a coherent overall argument, are either versions of essays previously published in journals or based on conference papers. This is not necessarily a criticism, and each of the essays shows a highly intelligent and lucid scholar working easily with literature, theology and theory generally, and often clarifying complex and important differences between writers — for example, in his Introduction’s perceptive recognition that, while MacDonald’s work can be placed in Romantic tradition, there is a fundamental difference between high Romanticism’s insistence on the God-like faculty within the individual, and MacDonald’s paradoxical insistence that, while he deplores the Calvinist ‘martinet’ God, God’s supremacy must overrule human aspiration to anything approaching the divine. Throughout Gray emphasizes how Macdonald is simultaneously a Romantic Platonist and a residual Calvinist — significantly suggesting that this in fact underlies the best of his work.

Thus the title suggests a broad focus on the relationship among fantasy, life and art. The discrete chapters limit this enquiry to specialist topics. At times I did feel that the book had been rather forced together, and that the changes of focus and topic, while cleverly linked, were unsettling. The most valuable chapters seem to me to be those on MacDonald and modern fantasy generally.

There are eight chapters; the first two focus on MacDonald’s insistence on the fundamental and regenerative importance of the child-like (as opposed to the childish) in human imagination. Gray convincingly finds the restorative power of story and wonder in Adela Cathcart, Adela suffering from that ailment of depression to which young Victorian women are prone (reminiscent of the nervous debilitation of the protagonist of Oliphant’s ‘The Library Window’). Anticipating C. S. Lewis’s idea of the power of the experience of reading, which restores through ‘annihilation of the self’, Gray argues that this is derived from MacDonald’s essential belief, reiterated again and again in his fantasy fiction, that life comes from death, in this instance through the imagination’s ability to defeat death by enabling the death of self. The second and third chapters take this further, the second citing Tolkien and C. S. Lewis and their defence of fantasy and fairy tale against dogmatic and religious improvers of children such as Mrs Barbauld, the third exploring further the paradox of MacDonald’s ‘death to life’ insistence, but this time examining how this can become puzzling and dark, as in the anti-climactic ending of Lilith (and surely in Phantastes also, with its similar finale of the seeker returned to earth?). Macdonald’s optimism is regularly partnered with a surprising and all too convincing pessimism regarding earthly cruelty and fallibility.

In the fourth chapter, on ‘Fantasy, Ecocriticism and the Life of the World’, Gray explores the criticism of MacDonald by Tolkien that instead of fantasy enhancing our experience of this world, MacDonald’s fantasy stories always visualise earthly experience, however fantastic, as a stage before ascending to somewhere else, ‘presumably heaven’. Gray goes on in a fascinating pair of eco-critical codas to show how in their own ways Lewis and Philip Pullman — and even Neil Gaiman — are critical of MacDonald (as well as each other).

It was at this stage that I felt the volume was moving in too many different directions. That’s not to say that the four chapters which form the second half of the book are in any way lesser in quality — Gray is always perceptive and original — but the movement in this half from exploration of children’s literature to a stimulating analysis of Stevenson’s neglected novel The Wrecker and a final chapter search for ‘the uncanniest Scot’, again lively and perceptive, left this reader with the sense of a confusion of pleasures. Indeed, the title, ‘Fantasy, Art and Life’, in its huge implications, suggests a much more ambitious volume rather than the present gathering of what are nevertheless fine essays.