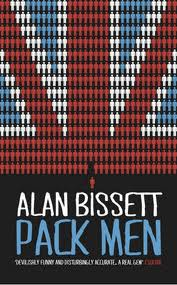 Men hunt in packs. Writers rarely do. They stand out from the crowd to get a better view. Alan Bissett is a case in point, an author who casts a cool eye over the frantic behaviour of young men from his own background. I first came across Bissett’s work when I reviewed Adrian Searle’s collection, The Hope That Kills Us: An Anthology of Scottish Football (2002). I gave Bissett my Man of the Match Award for his stunning short story, ‘A Minute’s Silence’, about bigotry and boyhood. I praised its ‘invincible spirit’, and said: ‘This is writing that turns on a tanner, full of dummies, feints, and nutmegs, wrong-footing the reader at every turn’.

After I’d submitted the review, I went to the launch, where Bissett’s reading was the star-turn, a turbo-charged affair. The dynamism in the writing was present in the performance. Here was a writer with energy to burn, whose spoken voice conveyed the fever pitch of his swaggering style. I’ve followed Bissett’s fiction since, and seen the same electrifying articulation of his work at numerous readings. I’ve had the pleasure of teaching with Alan on the Creative Writing course at the University of Glasgow, and I commissioned the powerful piece on Ravenscraig entitled ‘Shutdown’ that morphed into an award-winning film. Suffice to say I’m a season ticket holder for Bissett’s books, a cheerleader for his writing.

But like all fans I’m fickle. The great thing about football — and the grievous thing too — is the nature of fandom or fanhood. ‘Fan’, short for ‘fanatic’, refers to ‘a person filled with excessive and mistaken enthusiasm, especially in religion’, from fanum, meaning ‘temple’. Bissett’s The Incredible Adam Spark was a terrific novel, as exciting as anything I’ve read in contemporary Scottish fiction, but I felt it had the same Achilles Heel as Irvine Welsh or James Kelman, an individualistic sentimentality and an inability to conceive of the collective conscience without being patronising or dismissive or moralistic. The self always wins out. In first person narration, two’s a crowd. In Adam Spark’s world, the ‘h-glen animalz’ and the ‘t-hill posse’ were only ever cartoon grotesque figures that couldn’t quite aspire to Adam’s complex humanity, just as Francis Begbie could never reach Mark Renton’s level of self-reflection. There’s a quasi-theological aspect to the cult of the individual — character or author — that afflicts the literary landscape of modern Scotland, giving rise to a sleekit preaching and high-horseplay, where the reader is invited to sneer at the antics of the mob beyond the pale of personhood, the non-individuals. For me, the ultimate fanaticism is the fanaticism of the Big I Am, the Pac-Man that consumes others in order to survive. In football fiction, the result of such a match is a foregone conclusion: Self 1 – Society 0. The bookies always win.

Male writers examining their own sense of masculinity and selfhood through football, a traditional turnstile into family and community, is familiar ground. From Nick Hornby’s Fever Pitch (1992) to Rodge Glass’s Bring Me The Head of Ryan Giggs (2012), soccer offers succour to those engaged in that familiar activity of using the preoccupations of the father as a way into self-analysis. They are like Yeats, who ‘ranted to the knave and fool, But outgrew that school’, only to find they cannot rule their fanatic hearts, precisely because ‘Fine manners, liberal speech, Turn hatred into sport’. Yeats well knew that ‘architect and artist’ were not above the fray, but were ‘Bitter and violent men’. To paraphrase Derrida, there’s nothing outside of fanaticism.

Pack Men is an exception and an exceptional book. I was minded of Frank McGuinness’s play, Observe the Sons of Ulster Marching Towards the Somme (1985), which uses memory and sexuality as ways of digging into a troubled history of prejudice and patriotism marked by militant masculinity. Like war, football offers a field in which men can freely emote. As Janice Galloway noted in The Trick Is to Keep Breathing: ‘Love/Emotion = embarrassment: Scots equation. Exceptions are when roaring drunk or watching football. Men do rather better out of this loophole’.

Pack Men is the sequel to Bissett’s first novel, Boyracers (2001), featuring the same group of Falkirk friends swapping their car for a van on a trip to Manchester to see Rangers play in the 2008 UEFA Cup Final, ‘the men knitting the wool of the impending game with the needles of their chat’, needles that prick at bookish Alvin Allison’s conflicting past and present selves. A recent graduate of Stirling University, Alvin has doubts about taking sides — including questions about his sexuality, his class, his long-lost mother, who named him after a Seventies popstar then disappeared into deep space, and his future as a writer — that make him react against the ‘ripple of sectarianism’ from the sea of red, white and blue on which he floats: ‘I’m not even a Catholic and they make me feel Catholic’. Faced with a fundamental prohibition against boyhood betrayal — ‘Ye dinnay. Dump. Yer mates’ — Alvin tries to have it both ways.

Christopher Ricks once advised writers, ‘You can’t get mileage from the matter of fact and then refuse to pay the fare’. Likewise Alvin can’t find answers to his existential crisis by viewing his fellow travellers as cardboard cutouts or sectarian stereotypes. Is Alvin a ‘girl-boy’ or a ‘boy-girl’, like young Jack, son of Dolby the driver? There’s a backstory about Alvin’s relationship with John, a student at Stirling, whose hard-on Alvin tickles with a light blue feather, a nice counterpoint to the blue-do of the Manchester trip, and another intimate interlude with big-hearted Chrissie, aka ‘Wee Wife’ (though not to her face), but the strongest moment in the novel for me comes when Alvin hears a few home truths from his old pal Frannie. I was moved to tears by their exchange. In the fight for Alvin’s allegiance John and Frannie represent flipsides of the same coin of friendship, and that’s the two-footed challenge Alvin has to deal with. Is choosing sides in terms of sexuality, Alvin asks, ‘Like supportin a fitbaw team?’ Kissing the badge doesn’t make you loyal.

There is so much classy writing in Bissett’s book that the odd clunky sentence grates more than it would if hacked out by a lesser writer: ‘This morning’s as gorgeous as a catwalk in summer’. No it’s not. More characteristically Bissettian is Alvin’s reflection on one of many minor altercations: ‘I turn the ignition key of the incident again — me refusing drink — but can’t find the biting point of who said what and when, and the memory stalls’. At university, Alvin only had to fear students ‘leaping into the road to attack us with quotes from the classics’. On this Rangers road trip down memory lane he’s in danger of being mugged, as his certainties about so-called ‘sectarianism’ start to blur and his uncertainties about his sexual and social desires start to solidify. There’s a superb passage on Old Firm rivalry imagined through the eyes of Clive Barker, which, despite its ultimately lazy curse-on-both-your-terracings payoff, shows a writer at the top of his game.

Pack Men is a tale of two towns. Manchester is expected to serve up ‘Stella for a hundred and fifty thousand’, including Alvin and his friends, who are primed to go off. Frannie is ‘Hurricane Katrina taking 11/9 on a date’. When ‘the law of the crowd’ takes over, and the blue touch-paper is lit, even Alvin is prepared to break the rules. The explosive atmosphere in the host city is beautifully drawn, and the whole matchday ambiance brilliantly rendered, but it’s when he dips into ‘the Falkirkness of Falkirk’ — or ‘Fawkurt’ — and maps the town with an alien’s eye that Bissett’s writing really comes to life. However, when he delves into the devilish details of football lore, and says things like ‘There is no sense of irony about Loyalist songs whatsoever’, I find myself wondering how sure-footed he is. ‘The Famine Song’ may be offensive to Celtic fans — and god knows I’m one — and to the Irish in Scotland more generally, and its irony may be bound up with what Stephen King calls ‘the dark fuckery of the human heart’, but it’s irony nonetheless, irony made from girders. It’s also part of a call and response tradition, and a reply to ‘The Fields of Athenry’. Celtic fans are as invisible as they are humourless in Bissett’s book, mere politically correct straw men, so much so that, bizarrely, I found myself thinking, at least ‘The Famine Song’ is historically aware!

In Pack Men Bissett sets up an opposition between ‘Young Men’ and ‘Old Bastards’, as he and his friends face the no-man’s-land of middle youth. Bissett himself, pushing forty, is no longer a precocious talent, but emerging into establishment. As if sensing a change of pace, he has recently turned to female impersonation with a ‘one-woman show’, and has talked of playing Andrea Dworkin. Shifting from tearaway to Tootsie is one way of turning back the clock. The Boyracer is now a Pack Man struggling under the burden of Scottish masculinity. Getting in touch with his feminine and feminist side is part of Bissett’s development as a writer.

Had a Scottish author tackled an earlier European final in which Rangers featured — say the 1972 Barcelona final that they won, with its notorious pitch invasion — it would have been tinged with triumphalism. In writing about a famous defeat rather than a famous victory Bissett gets under the skin of football fans at their most vulnerable — and violent. But there’s violence on both sides, on all sides, including the violence whereby the individual dumps his friends, family, community. In the original videogame, Pac-Man gobbles up the ghosts, goblins, octupi and monsters that are his enemies, including Inky, Pinky, Blinky and Clyde. In Pack Men, having tried to ingest and exorcise his Falkirk phantoms and failed, and yet succeeded, and lost, and yet won, Alvin wishes for some stardust, a ‘meteor shower’ to match his newfound enlightenment.

Alvin, ‘in the thick of men addicted to tradition’, is still asking big questions at the story’s end: ‘I want to know what being a working-class Scotsman truly means cos I haven’t a fucking clue any more’. The truth is, it’s not a subject to be studied or an answer to individual angst. Alvin tries to grow out of football and other things of childhood, ‘like proper adults should’, but there is something that ‘the deep mental cleansing of an arts degree can’t quite wash away’. He finally finds more humanity in Pack Men than Pac-Man. Voyages of self-discovery are wasted journeys. It’s the travelling companions that make any trip worthwhile. Life is all about teamwork. If Alvin aspires to be a writer with a social conscience then Bertolt Brecht’s belief in the healing power of football, the hope that heals us and lifts us out of our silos of selfhood — and his desire to bring the passion of that game into the theatre — is salutary. It’s possible both to think and write and to be interested in football. Camus was a goalkeeper who famously declared, ‘All that I know most surely about morality and obligations I owe to football’. His compatriot Derrida says of his own childhood in Algeria: ‘We used to play until it was pitch dark: I dreamt of becoming a professional footballer’. Pack Men isn’t really about the beautiful game at all; it’s a beautiful book about the game of life, about friendship and finding your feet. It knocked me off mine.

Pack Men by Alan Bissett is published by Hachette Scotland, 2011.

The Right Woman for the Job? Muriel Spark’s ‘The Only Problem’

The Muriel Spark Centenary in 2018 (#murielspark100) affords an opportunity to look back on Spark’s achievements, and forward to ways of making those achievements more widely known – to reflect and to resituate. Arguably the most important Scottish writer after Burns, Scott, and Stevenson, Spark remains relatively neglected, the sheer diversity of her oeuvre appreciated […]