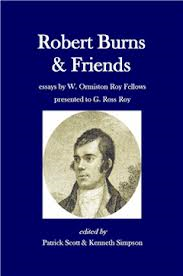 This volume is a tribute to G. Ross Roy, Distinguished Professor Emeritus of English and Comparative Literature at the University of South Carolina. Prof. Roy enjoyed a long career as a distinguished teacher and scholar of Scottish literature, but was also a generous and energetic facilitator of the work of others: his name must stand near the top of any roll-call of those who established Scottish Studies as an academic discipline in the second half of the twentieth century. He is perhaps best known for his 1985 edition of the Letters of Robert Burns, thoroughly revised and expanded from J. De Lancy Ferguson’s of 1931; and for the journal Studies in Scottish Literature, founded and long edited by Prof. Roy, which continues to thrive in electronic form. The volume under review emerges from another aspect of his legacy. Prof. Roy inherited a collection of books relating to Burns begun by his grandfather, W. Ormiston Roy; this he enthusiastically expanded and then donated to the library of the University of South Carolina, and established the W. Ormiston Roy Memorial Fellowship to enable scholars to come to the U.S. to work in its extensive collections. This volume is published by the University of South Carolina Libraries, and its contributors are drawn from those who have held these fellowships. Their tribute now has an unanticipated poignancy, as Prof. Roy passed away on 19 February this year.

Collections of essays have for some time been the most common type of scholarly book published on Burns. Perhaps something about Burns invites the multiplicity of interpretive angles that such volumes make possible; and, conversely, resists the unifying grand thesis that might inspire an academic monograph. This one certainly deserves to sit alongside, for example, The Edinburgh Companion to Robert Burns edited by Gerry Carruthers (2009). As one might expect given its provenance, several of the most satisfying essays here start from the close engagement with texts fostered by archival research and the editorial process. Valentina Bold’s essay on the challenges of editing The Merry Muses of Caledonia, the unstable anthology of bawdy lyrics which began with Burns’s collection, must be the starting-point for anyone interested in this aspect of the poet’s work and legacy. Kirsteen McCue similarly reveals the difficulties facing the editor even of a text as simple and famous as ‘A red red Rose’. The emergence of this song from a set of lyric conventions already in circulation, and attached to various (already published) tunes by Burns and his collaborators, is a case-study in the social conditions of Burns’s creativity in this most treasured area of his work. McCue describes the first publication of Burns’s lyric by the Italian composer Pietro Urbani, who had invited the poet to translate an Italian song for him; in a pleasing symmetry, this collection includes an account by Marco Fazzini of translating ‘A red red Rose’ into Italian. The close focus on a single text is also rewarding in Corey Andrews’s essay on ‘Halloween’. Andrews makes the appealing suggestion that this poem’s representation of country folk resists their categorisation as ‘unenlightened’ by its own preface, even while it ‘implicates the knowing reader in the wistful enterprise of such casual anthropology’ (36). But this insight is given fascinating counterpoint by Gerry Carruthers’s suggestion that the ‘folk’ in question are not even Burns’s Ayrshire neighbours, long alienated from such ‘Papist’ or ‘Pagan’ shenanigans by vigorous Kirk discipline, but the more easy-going people of the North-East as remembered by his father. Carruthers’s essay on the reception and revision of ‘Tam o’ Shanter’ is another high-point in this collection, like McCue’s emphasising the historical mutability of a text we tend to think of as fixed by its very familiarity.

Such attention to the origins and internal complexities of particular works by Burns inevitably call into question some of the more general claims traditionally made for him. Since the nineteenth century, critics have often appropriated Burns for a romantic cultural nationalism, to see him as the embodiment of ‘a people’s tradition’, and his art as one ‘that grows organically out of its milieu’ and is ‘integrally part of the community’. This approach is given voice here by Fred Freeman (88). Criticism informed by such assumptions has to count a poem like ‘Halloween’ (or, paradigmatically, ‘The Cotter’s Saturday night’) as aesthetic failures, due precisely to their formal distance from the community they describe. And McCue’s example of Burns’s song-writing practice contrasts with Freeman’s romantic vision of Burns as wandering musician, ‘who mixed with fiddlers up and down the country, usually pilfering their tunes for a song’ (89). Burns’s choice of tune for ‘A red red Rose’ was one recently composed by Niel Gow and published in a book titled A Collection of Strathspeys and Reels with a Bass for the Violoncello or Harpsichord. The milieu from which Burns’s songs were produced contained harpsichords as well as fiddles, expensive printed books as well as popular performance; and one wonders in what sense a song’s production from such a heterogeneous context might be called ‘organic’. Freeman describes Burns the songwriter as suffering ‘200 years of neglect’ (85); I suspect most songwriters would be delighted at the prospect of such consistent and continuing ‘neglect’ as this.

It is precisely such thought-provoking juxtaposition of contrasting perspectives that can make a collection of essays such as this so rewarding. Elsewhere, essays on Burns’s literary inheritance (Carol McGuirk on his debt to Fergusson; R.D.S. Jack reading Burns through the categories of classical rhetoric; Kenneth Simpson on Burns and eighteenth-century epistolarity) are balanced with essays examining the precedent set by Burns for nineteenth-century writers (David Robb on Hugh Miller, Douglas S. Mack on James Hogg, Edward J. Cowan on the Canadian poet Alexander McLachlan). The volume is opened with a biographical tribute to Prof. Roy by Kenneth Simpson. It is concluded with an account of the G. Ross Roy Collection of Robert Burns and Scottish Literature at South Carolina, and a checklist of his publications by Patrick Scott; a checklist which must now, alas, be regarded as complete. Prof. Mack’s essay for this collection was also among his last, as he passed away in December 2009. But although these circumstances tinge one’s approach to this volume with sadness, its effect is to confirm the ongoing vitality of Burns scholarship and Scottish literary studies generally.and Scottish literary studies generally.

Robert Burns and Friends edited by Patrick Scott and Kenneth Simpson was published by OUP in 2013.

The Kilmarnock Burns and Book History

Allan Young and I have just published the first-ever attempt to track down all surviving copies of Burns’s first book, Poems, Chiefly in the Scottish Dialect (Kilmarnock: Wilson, 1786), the Kilmarnock Burns.  Mr Young started working on this project fifteen years ago, and I have been collaborating with him for the past two years.  We […]