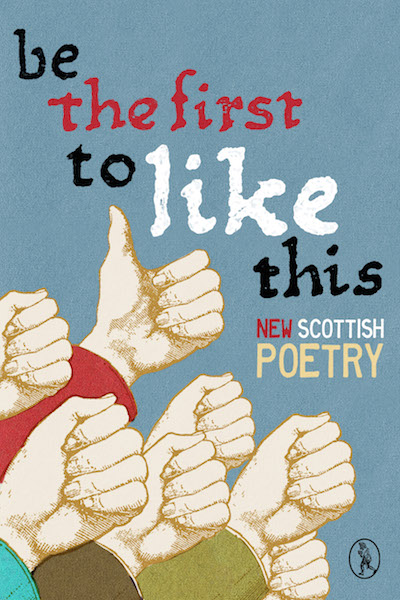 Picture the scene. It’s a Saturday afternoon in my flat. I’m dawdling, browsing the newspaper, wondering what to do with myself when the phone goes. On the other end of the line, Allan Cameron, publisher.

“Uh, congratulations,” I say, uncertain why he’s sharing this news with me. In case you don’t know, Vagabond Voices is a small yet ambitious Scottish publisher specialising in translations, political works and novels by authors with a profile, such as Allan Massie, that their regular publisher was daft enough to pass over.

“And now that we’re making money I want to publish poetry.”

Undaunted, Allan asked if I would like to take the (unpaid) post of Vagabond Voices poetry editor.

My instinct was to say no. I was already helping out with another couple of projects, plus I had my regular job as the Scottish Poetry Library’s Communications Manager to consider. I said yes, however. I had an idea, an idea that was so obvious to me, I was surprised no one else had had it. I’d even go as far to say it was a ‘no-brainer’.

How about an anthology collecting the work of new Scottish and Scotland-based poets?

Working at the Scottish Poetry Library, I encounter on a daily basis interesting work by poets in the foothills of their careers. The SPL supports fresh poetic talent in a number of ways, from putting on events showcasing their work, to recording podcasts with them, as well as putting names forward for rewards and schemes when asked to make recommendations by various bodies. I knew there was good stuff out there.

One of my colleagues is Jennifer Williams, better known in the poetry world as the Saltire Literary Award-shortlisted poet J.L. Williams. Jennifer regularly performs at poetry and spoken word events throughout Scotland. I began to attend these nights to support Jennifer. Soon I realised there was a spoken word boom going on in the central belt that the mainstream media hadn’t yet picked up on. In Edinburgh alone there were countless spoken word events; moreover, they were pulling in crowds of young people. If you’re interested in the new wave of Scottish poetry, you will know the names of these nights already: Neu! Reekie!, Rally & Broad, CAESURA, Talking Heids, Shore Poets, Accelerator, Tricolour, 10Red – I could go on.

Through these nights I became aware of a number of young poets whose take on the modern world was insightful, funny, often angry, sometimes sexy, but always fresh. They tackled subjects I hadn’t encountered in poetry before: online pornography, the language of the era of austerity, texting, immigration, visiting a sexual health clinic, internet dating, 24-hour alcohol licencing, and a lot more. I realised I was on a quest not merely for new poets, but for new subjects too. ‘Make it new,’ as Ezra Pound said. It became a mission statement for the book that would become Be the First to Like This.

The title itself summed up the approach of the book. Taken from a poem by Theresa Muñoz, the title nods towards the internet and to the fact many of these poets will be new to readers. There poets have grown up as digital natives, with the internet not only providing them with a subject, but with a way of sharing their work earlier generations of poets could only dream of. As I know from my job as Communications Manager, poetry is of all the written arts the most comfortable with the digital era. It’s possible through judicious quotation to give a real sense of a poem’s personality in a tweet. You can’t do that with a novel or a short story or play. The SPL’s immensely popular podcast series also shows how new technology can takes poets voices around the world; for relatively little money and training, we can produce broadcast quality programmes that showcase a variety of poets’ work and personalities. As we leave the Gutenberg era for something new, poetry is well placed to exploit the change.

At the same time, I suspect the spoken word boom is partly fuelled by a reaction against the increasingly mediated nature of the world we live in now. Audiences relish being in an environment where they can see the whites of the eyes of the performers, something real, un-pixelated. Essentially, contemporary poetry is having its cake and eating it too.

The experience of working at the SPL and of editing BTFTLT has made me optimistic about poetry’s future. Yes, more people will buy the new Coldplay album than will read Kathleen Jamie’s next collection. Yes, poetry will remain a passion for a relatively small portion of the population. I also know that poetry is the great survivor, the Keith Richards of the arts. It was there at the dawn of civilisation – it has to be a toss-up between poetry, music or painting for what was the first art form early man took up – and it will be there at the end. When there are only a few humans left sitting around a campfire, they will amuse themselves with rhymes and word games, for poetry only needs a voice, not even a pen and piece of paper. I find this apocalyptic vision weirdly comforting.

In the meantime, let’s celebrate this young and vital scene. On the Scottish poetry website you’ll find examples on the poet pages and podcasts, plus our events calendar has details of the times and places of the spoken word events. And, dare I say, you can also go straight to the source by purchasing a copy of BTFTLT via the website I designed for the book. Get it now before the world ends – or a new one begins.