… one sentence that launched a million Google searches. What does Jamie mean when he calls Claire Sassenach? He says it so sweetly — is it an endearment? Well, sort of. And what does dinna fash mean? Is it a reassurance? Definitely.

Full of adventure, romance, and historical detail, Diana Gabaldon’s first Outlander novel is also full of Scots and Gaelic — two of Scotland’s three indigenous languages (the other being English, of course).

The Outlander Wiki is a great resource for the Gaelic you find in the novels, and we at The Bottle Imp have asked Scottish Language Dictionaries to take a closer look at the Scots. Now, as you’re riding through the heather with Jamie and his men, you’ll know exactly where they’re stopping, what they’re eating, and what they’re saying.

This column takes a historical approach — we’re interested in our eighteenth-century story, after all — but most of these words are still current and used today. You can find all of them in the free, online Dictionary of the Scots Language, and if you have any questions, you can email one of the editors at Scottish Language Dictionaries: mail@scotsdictionaries.org.uk If you have any comments or questions for The Bottle Imp, please get in touch! 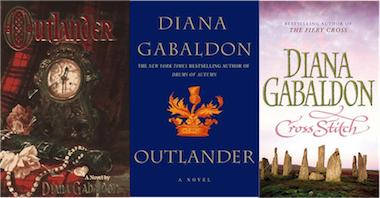 Bannock: a round, flat, thickish cake of oatmeal, barley, pease or flour, baked on a girdle. The word can be used metaphorically; it is possibly from Gaelic bannoch, cf. Latin panicium ‘bread’. At the end of the eighteenth century, it is recorded that such ‘thin, flaccid cakes’ were ‘the ordinary bread of the gentry or lairds’ in Perthshire.

Bothy: primitive dwelling or shelter. The form is probably from the same origin as English booth, cf. Germanic bu– ‘to dwell’. Such shelters were commonly occupied by country-folk on field-duty, e.g. shepherds. Thomas Pennant, touring Scotland at the end of the eighteenth century, refers to the Bothay as ‘a dairy-house, where the Highland shepherds, or graziers, live during summer with their herds and flocks, and during that season make butter and cheese’. Common bothy-food at the end of the nineteenth century was brose (see below). The term bothy is often used to refer to a hillwalkers’ shelter, as witnessed by the Mountain Bothies Association.

Braw: fine, splendid, worthy, handsome; related to brave. Robert Burns in ‘The Cottar’s Saturday Night’ refers to how ‘Their eldest hope, their Jenny, woman-grown’, comes home to show off her ‘braw new gown’.

Broch: Possibly Pictish, but cf. Old Norse borg, Old English burh, Present Day English burgh, borough, and in Older Scots broch commonly refers to a town. The term seems to have entered Scots with its primary current meaning, viz. primarily a prehistoric structure, consisting of round tower with inner and outer walls of stone and generally found in the northern isles and nearby mainland, at the beginning of the nineteenth century. Patrick Neill, another tourist in the Highlands and Islands, refers in 1806 to how ‘We viewed the Pechts’ Brough, or little circular fort, which has given name to the place. It is nearly of the same dimensions and construction with the many other broughs or pechts-forts in Shetland. […] These broughs seem to have been calculated to communicate by signals with each other; the site of one being uniformly seen from that of some other.’

Brose pudding: brose is a dish made by mixing water or milk with oatmeal or peasemeal, and adding salt or butter, often eaten in a bothy (see above). George Douglas Brown, in The House with the Green Shutters (1901), makes one of his characters insult another by calling him a brose: ‘”He’s a lying brose, that,” said the baker.’

Cockernonnie: a high coiffure, generally applied to females; the term is occasionally extended to include a head-dress. Can be used metaphorically for a tottering haystack. The first element seems to derive from the verb cocker, meaning ‘to rock or walk unsteadily’, which seems very plausible.

Corbie: raven, often regarded as a bird of ill omen, from Old French corb or corbin. The terms was also used figuratively for ‘a swindler’. Scott uses the term in this way in Rob Roy: ‘I’ll never bear sae base a mind as thae corbies in the Gallowgate — an’ I am to lose by ye, I’se ne’er deny I hae won by ye mony a fair pund sterling.’

Cot-house: a small cottage. Burns refers to ‘poor Cot-folk’ in ‘The Twa Dogs’, while in Roxburgh in 1795 it is recorded that ‘Small tenants […] in the village of Roxburgh are called cotlanders, possessing […] about two acres of land each, together with a house, yard, and liberty of pasturing their cows in an adjacent loaning.’

Dirk: a short dagger worn in the belt by Highlanders. James Hogg refers to how, in the seventeenth century, Highland soldiers each had ‘a sword an’ a gun, a knapsack an’ a durk’. The term was also extended to mean a sort of clasp-knife.

Ken: know, be aware of, learn, make known. Recent examples can be found in Irvine Welsh’s Trainspotting (1993): ‘The Fit ay Leith Walk is really likes, mobbed oot man. It’s too hot for a fair-skinned punter, likesay, ken? Some cats thrive in the heat, but the likes ay me, ken, we jist cannae handle it. Too severe a gig man.’ and in the name of The Ken Fine Show, a ‘Magazine style series presented by Jack Docherty, which celebrates the Scots language, dialects and Gaelic’.

Kine: cows. Cows were always subject to curious diseases; the Memoirs of the Maxwells of Pollok (1650) refer to ‘When kine wer elfe-shote’, i.e. suffering from a disease that was what John Jamieson, the great nineteenth-century lexicographer, stated as ‘supposed to be produced by the immediate agency of evil spirits’.

Laird: landed proprietor, related to English lord etymologically (both from Old English hlaford), but developing a distinct meaning equivalent to the English squire, or lesser gentry. Scott catches some of the expectations of the laird in his introduction to The Monastery (1820): ‘The laird had his farming and improving operations to superintend; and, besides, he had to attend trustee meetings, and lieutenancy meetings, and head-courts, and meetings of justices, and what not.’

Receipts: recipe or prescription. John Moncreif, in The Poor Mans’ Physician (1731), offered ‘The Receits of the Famous John Moncrief of Tippermalloch; Being a choice Collection of simple and easy Remedies for most Distempers’. The Dictionary of the Scots Language records receipt being used to mean a food recipe in 2003: ‘Ma mither-in-law had a great receipt for pancakes’.

Sark shirt, generally male, but the term was used also for a woman’s chemise. The form derives from Old Norse serkr. In 1721, a curious custom is recorded: ‘He was wrap’d in his Mother’s Sark Tail. The Scots have a superstitious Custom of receiving a Child, when it comes to the World, in its Mother’s Shift, if a Male; believing that this Usage will make him wellbeloved among Women.’ And perhaps the most famous sark is the one worn by Robert Burns’s beguiling witch in ‘Tam O’Shanter’.

Sassenach: English-speaking person, formerly applied to Lowlanders but later applied to Englishmen or women. The form derives from Gaelic sasunnach ‘Saxon’. When Jamie calls Claire a Sassenach, he is drawing attention to the fact that she is English and a foreigner. He means it as an endearment, but this is not always the case, as Maggie Scott explains in an earlier column for The Bottle Imp. Also see Dinna Fash, above.

Sporran: pouch, specifically of leather, and with the dirk (see above) a traditional item of highland dress. The form is from Gaelic sporan. A traveller in 1752 described the appearance of a Highlander as follows: ‘This Weapon [dirk] hangs before in a Scabbard along with a Knife and Fork, and a Purse for their Money, which they term a Sparren.’

Stramash: uproar, commotion, hubbub. The word has a wide currency in Scots; the famous nineteenth-century newspaper columnist W.D.Latto (‘Tammas Bodkin’) offers the following citation in DSL from 1864: ‘There arose a stramash doon stairs fiercer than ordinary.’

Tinchel: hunting term in origin, meaning a ring of hunters or beaters who surround a chosen area and gradually close in to catch their quarry; the form can be extended to refer to a pack of animals. John Taylor, the English self-styled ‘Water Poet’ who visited Scotland in 1618, describes the process as follows: [The manner of hunting is this […] [the hunters] doe lie down on the ground till those foresaid scouts which are called the tinckhell doe bring down the deer but as the proverb says of a bad cooke so these tinckhell men doe lick their own fingers; […]’ The word derives from Gaelic timchoill.

Wean: child, especially before its teens: a blended form of wee + ane ‘wee one’, and in some parts of Scotland the blend is not complete. Allan Ramsay in 1725 has the following line: ‘Troth, my Niece is a right dainty we’an. ‘ The apostrophe — which may of course be the printer’s intervention — suggests that the blend was not yet complete.

Wee folk: people of the lowest ranks in society, but generally extended to refer to supernatural beings such as fairies, goblins etc. A study of 1986 refers to how, in Dundee, ‘In many places circles of blue caum [pipeclay] were drawn on doorsteps to keep the “wee folk” away.’

Scots Word of the Season: ‘Sassenach’

Sassenach adj. and n. English; an English person Sassenach is derived from the Scottish Gaelic word sasunnach, literally meaning ‘Saxon’, and originally used by Gaelic speakers to refer to non-Gaelic speaking Scottish Lowlanders. Scots, after all, is descended from northern varieties of the medieval language known as Old English or Anglo-Saxon, and although Scots and English evolved into their own distinctive […]

A Dictionary of the Languages of Scottish Travellers

During the early summer of 2011, while revising the Concise Scots Dictionary, I was searching for a word I knew to be of Traveller origin. I was searching The Scottish Traveller Dialects by Jess Smith and Robert Dawson, an excellent source for words used by Travellers1 — but one which is arranged in the form of informant lists without […]