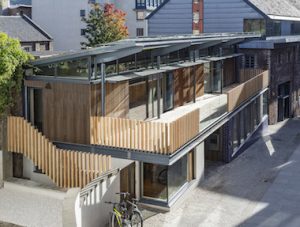 Since 1984, the Scottish Poetry Library has been in the heart of the Old Town in Edinburgh, an area rich in literary and publishing associations. At the top of the Royal Mile there is the Writers’ Museum, with its collections relating to Burns, Scott and Stevenson, and outside in Makars’ Court, memorial stones to Scottish writers from John Barbour to Dorothy Dunnett. At the foot, the Scottish Parliament quotations’ wall ranges from Alan Jackson’s political squib to John Muir’s declaration of the moral importance of conservation. And in between you will find the Scottish Storytelling Centre, and Canongate Kirk where Robert Fergusson is buried, his headstone renewed by Robert Burns and his endearing statue now appearing in many a tourist photograph.

The SPL began in Tweeddale Court, close to the Saltire Society, to publishers Oliver & Boyd and Canongate. The founding director, poet Tessa Ransford — who died in September 2015 — was determined that it should have a building of its own, and obtained Grant 001 from the National Lottery for capital arts projects, awarded by the Scottish Arts Council, as the core of the funding for her endeavour. The new building, designed by Malcolm Fraser Architects, was opened to the public in June 1999. There are two other poetry libraries in the UK, the Poetry Library at the Southbank Centre, older than the SPL by some thirty years, and the Northern Poetry Library in Morpeth, currently being revived and reanimated. We think that the SPL is the only purpose-built, public poetry library in Europe, perhaps in the world — no one has come forward to say that we are wrong!

Having achieved the establishment of the SPL in its elegant new home, Tessa retired in 1999 and I succeeded her in 2000, coming from the world of publishing both literary and academic. Originally from New Zealand, I had spent fourteen years studying and working in England, and then moved to Glasgow in 1987. So by 2000 I was familiar with the Scottish literary scene, especially through my work for Carcanet Press (which has a strong Scottish poetry list), and as a member of the Grants to Publishers panel for the Scottish Arts Council. Nevertheless, heading the SPL was a new departure for me. When asked at interview whether I had any experience of running a building, I admitted I had not, but privately thought that was scarcely relevant, as the building was brand new and thus surely not problematic. Little did I know, for example, that it would take five years — and the help of Stewart Conn, the first Edinburgh Makar — to convince the City Council to allow us even a tiny indication of the SPL’s whereabouts at the entrance to Crichton’s Close.

In October this year, the developers of the New Waverley site at the corner of the Canongate and New Street enabled us to print a HUGE poem by the late Elizabeth Burns — chosen by public vote online from five we shortlisted — on a scaffolding banner that puts the SPL’s name in larger letters than has ever been possible, albeit only until next summer. Have we shelved the idea of being a discreet presence, an elegant retreat for those who already know and love the art of poetry; have we abandoned the quiet, interior life for the noise of the street?

The answer is: we think that sound and silence can co-exist, but it has taken us a while to find out how to make this happen in our building, and in the life of the institution generally. Of course the SPL is more than a building, but the building makes a statement: it declares that there is a space particular to poetry in Scotland, that Scotland values the art sufficiently to give it an outward and visible sign. The Library arrived in that space before the new Parliament was built, perhaps before Scotland had regained its confidence as a nation, but as part of the movement of confident artists. A poetry library for Scotland: it has always been international in its outlook, by no means confined to Scottish poetry either in its collection or its activities. It is a place for research, serendipitous discovery, serious reading and casual browsing — in those ways, a library like any other, but always flying the flag for poetry.

Yet fifteen years after its incarnation in Crichton’s Close, it had to change. Libraries have changed. Readers’ expectations have changed. Thinking about the SPL had evolved, and befitted enormously from new energies brought by new staff. We now have staff members with specific responsibilities for communications, programme, learning, and community projects as well as our great librarians. We had to move into the virtual world, and of course the website is a brilliant way for the SPL to fulfil a national and international remit, sharing Scotland’s poetry with the world and giving the world’s poetry a door onto Scotland.

Our motto was ‘by leaves we live’, a phrase by Patrick Geddes, the visionary Scottish polymath who was Tessa’s lodestar. It was inscribed on our threshold for those who noticed as they stepped across stone leaves at the entrance, and became our Twitter hash-tag. It said something resonant: that we are an interdependent species, that we must take care of every aspect of the living world, and that we are people of the book, looking to their leaves for our sustenance. It is a lovely phrase, and we’re keeping it virtually. But we are letting go of it physically: the leaves have gone from our new entrance — however they’re travelling up the road, to Riddles Court, where they’ll be part of the Patrick Geddes study centre and thus very appropriately housed.

The SPL re-opened at the end of October, extended and refurbished. In its renewed form — designed by Nicoll Russell Studios — we hope that it embodies our motto ‘bringing people and poems together’. We are speaking more plainly, more confidently, more ambitiously. Instead of hefty wooden shutters, the building has a lot of glass, letting in light and air — letting people see from the outside what we do inside. People often used to miss the entrance door, and climb slowly up the steps to a door through which they could not enter, so that their first contact with the SPL was someone shouting at them: ‘Not there, down here!’ This provides an irresistible metaphor for the approach to poetry; not noticing the easiest way in, reading to the end with effort and then being told you have got it wrong …

We know that not everyone will love poetry, or want it. But how many people we meet who, offered the right poem at the right time, treasure that encounter. How do we make the whole journey easier? Not by dumbing-down but by opening up. This ambition is integral to all our services, in schools and care homes, for newly-fledged doctors to doctoral students, for avid listeners and would-be writers, from small children to older people with hearing difficulties or sight problems — how best to bring all these people together with the poems that will amuse, enrich or even puzzle them in an interesting way?

And this desire translates into the changed spaces we can now offer. The entrance is clear. The collection is immediately visible. There is an inviting space to sit with children; a place to work and watch the world go by; a secluded study section; a special listening space. There is an enclosed, sound-proofed space offering the opportunity for reading out loud and discussion, simultaneously with silent reading and study in other areas of the library, which has not been possible until now. We can offer both the traditional space of the page and other spaces in which to encounter poetry.

Enabling people to hear poets read aloud, to hear the actual voice of the poet speaking the lines as she heard them in her head, is hugely important in developing the audience for poetry. Of course people can listen to recordings online, and we will be trying to make more of those available so that people who cannot come to the library — our online, wider, and international community of users — can access poets’ voices. Why do people go to concerts when they can listen to pristine recordings at home? Because it gives them a sense of authentic contact, and because they have the experience in a community, and it is this shared physical space — of reading, listening and discussion — that is so important for the SPL to provide.

Mostly, reading is a private experience, and reading poetry on the page — as opposed to the screen — is a very particular experience. It is the white space around the lines that suggest ‘poem’ not ‘prose’, and many poets play with that space deliberately, making the poem visually as well as verbally engaging. Concrete poetry has a strong tradition in Scotland and the SPL has a fine collection of it. It can be reproduced on a screen now that texts can be made more stable but that, on the whole, does not reproduce the sensation — and it is sensual — of turning the page in a carefully composed collection, of moving from one stanza to the next. The typeface is/should be important. The difference in size and shape between a full collection and the flourishing pamphlet form gives a signal which disappears when the book is not physically present. We could not afford to produce Best Scottish Poems as a book, and I love having that annual sampler on line, but for me, books are where poetry lives — as well as in the mouth and the ear.

The library building and the page-poem share characteristics which have been wonderfully expressed by the Scottish poet W.S. Graham in his ‘Private Poem to Norman MacLeod’:

We look forward to seeing you in our renewed spaces.

The Scottish Poetry Library is a unique resource and advocate for the enriching art of poetry, in particular Scottish poetry [see a list of our new publications]. The SPL aims: to bring the pleasures of poetry to as wide an audience as possible to nurture creative language skills in the context of life-long learning to promote knowledge of […]

‘Drum of Stone’ by Humberto Ak’abal

Humberto Ak’abal visited Scotland around this time last year, and the sounds of his maternal Mayak’iche’ language held listeners enthralled from Ullapool to Edinburgh. It’s rare that such an exotic guest should be accompanied by a book specially produced for the occasion. Congratulations are due to Kettillonia, publisher/translator James Robertson, and translator Rosemary Burnett, for their […]

So often these days I’m aware that my life, with its gentle rhythms of eating and sleeping, working in a building filled with glass and light and books of poetry, enjoying time with friends at literary festivals, walking streets lined with blossoming gardens and glittering shops — all that comes at the cost of the […]