For most readers in nineteenth century Europe, Scotland was less a nation than a Romantic literary myth. The poetry of Ossian (published between 1760 and 1763) and the Waverley Novels of Sir Walter Scott (1771-1832) fostered a continental mania for all things Scottish that had little if anything to do with the country itself. That craze gave birth to operas such as Lucia di Lammermoor (Gaetano Donizetti, 1835) and La Jolie Fille de Perth/The Fair Maid of Perth (Georges Bizet, 1867), both of them based on stories by Scott. Also to such half-remembered fictional characters as Marmor de Karkoël, the demonic Scottish nobleman in Barbey d’Aurevilly’s Les Diaboliques (1874), who sets hearts fatally aflutter in a French provincial salon. It scarcely mattered that Ossian was soon exposed as a literary hoax, or that Scott — who was once widely considered the greatest author since Shakespeare — is now read by hardly anyone, apart from school pupils under duress. For most of the nineteenth century, the myth of Scotland as a remote and mystical ‘otherworld’ remained a potent literary and cultural force.

One of the most important architects of that myth, the French Romantic author Charles Nodier (1780-1844), is also one of the least known and least talked about today. A bizarre and rather self-contradictory figure, Nodier was a passionate and visionary Romantic who spent the last two decades of his life working as a librarian at the Bibliothèque de l’Arsenal in Paris. A generation older than Victor Hugo and other French Romantics, he had witnessed the horrors of the Revolution and the Napoleonic Wars at first hand. He feared — in a way his younger and more wide-eyed confrères did not — that the liberation of human instincts implied by the Romantic Movement might easily give rise to a vague des passions, a ‘wave of passions’ that threatened to engulf civilisation as we know it. In 1821, on the cusp of middle age, Nodier declared open war against les frénétiques — those authors who practiced the more extreme and violent strains of Romanticism. What he advocated instead was Romanticism in a milder and more balanced form, one that might allow for a smooth continuity of Christian culture.

His ideal of Romanticism along these lines was to be found in the novels and poems of Sir Walter Scott. So enamoured was Nodier that, in the spring of 1821, he and three friends embarked on a seven-week pilgrimage from Dieppe on the Norman coast all the way to remote reaches of the Scottish Highlands. Their itinerary took in Edinburgh and Glasgow and all the usual sights — but their ultimate goal, of course, was Ben Lomond, where they might pay homage at the home of their idol, Sir Walter Scott. Unfortunately, the Great Man was not at home when they called. Nodier, however, was a resourceful writer and did not let his disappointment faze him unduly. Returning to France, he swiftly published a 334-page account of his trip, Promenade de Dieppe aux montagnes d’Écosse/A Journey from Dieppe to the Scottish Highlands. The book was successful enough to be published in English and a review in Blackwood’s Magazine expressed ‘surprise that a Frenchman could describe Scotland as seen through the eyes of a great poet’.2 Sir Walter Scott’s wife, meanwhile, was dismayed that a book should be so indiscreet as to describe young Scottish maidens wandering about without shoes!

Of far more lasting value than this travel guide was the wealth of Scottish myth and folklore that Nodier managed to pick up along the way. Much of it would find its way into his 1822 novella Trilby, ou le lutin d’Argail/Trilby, or the Imp of Argyll — which Nodier designed consciously as a Romantic fiction in the style of Sir Walter Scott. The story’s tragic heroine, Jeannie, has a name almost identical to that of Scott’s heroine Jeanie (with one ‘n’) in his 1818 novel The Heart of Midlothian. It is a supernatural tale of thwarted and impossible love involving Jeannie — a fisherman’s wife on the shores of Loch Beau — and the eerily seductive Trilby, an imp who is half-angel and half-demon. Yet as the critic Pierre-Georges Castex so rightly notes, ‘what matters in Trilby is not really the legend, or the Scottish setting in which it takes place, but the drama that plays out between the characters and, above all, in the soul of the heroine herself.’3 As much as any character in the Romantic literary canon, Jeannie is a victim of la vague des passions, which threatens to engulf her mind, her soul and her entire being.

This may sound like an odd choice of theme for an author embroiled in an ideological war against les frénétiques. Yet in the wider context of Nodier’s writing, Trilby represents an abrupt and radical shift. His novella of the previous year, Smarra, ou les Démons de la nuit/Smarra, or the Demons of the Night (1821) is a feverish and proto-Surrealist dream narrative whose hero plunges into subconscious nightmare realm. Ultimately, he comes face to face with the evil sorceress Méroé, whose ring contains a phallic vampire demon named Smarra. At the story’s climax (I used the word advisedly) this demon penetrates the hero through his bosom and feasts on his blood. After the Gothic paroxysms of Smarra, this new story seems alarmingly and perhaps disappointingly tame. Yet the relative lightness of Trilby has far more to do with its surface texture than its deep-down dramatic core. As Castex points out: ‘In Trilby, the attack by demonic forces is more perfidious and insinuating. The story hides its cruelty in the guise of a romance with a faint touch of melancholy.’4

As the story opens, Trilby is a seemingly innocuous spirit who haunts the idyllic lakeside croft where Jeannie lives with her upright if rather stolid husband, Dougal. His attentions to Jeanie are largely innocent and only lightly touched with sensuality. Yet his favourite abode in the household appears to be the fire, where Nodier describes him thus:

Like all the best Romantic imagery, this passage is deeply ambiguous — and unreadable, perhaps, in any clear or unequivocal way. Trilby is at once a demon luxuriating in the hot flames of Hell and a heavenly being who bears a sublime message. The angel with the flaming sword who guards the way to Eden, the burning bush through which God speaks to Moses, the tongues of fire that dance (but do not burn) above the heads of Christ’s apostles. Is Trilby more one than the other? At this point, it is impossible to say.

Disturbed by the presence of the spirit, Dougal summons a dour old monk named Ronald to exorcise Trilby from the house. He then drags poor Jeannie on a pilgrimage of penance to the shrine of St Columban at the monastery of Balvaig. Yet it soon becomes apparent on their journey that Trilby’s ambiguous and possibly pagan presence is far from vanished. The autumnal landscape of Scotland, which is meant to exist under the benign but forbidding eye of the Catholic Church, seems to glow with reflections of some lost Graeco-Roman paradise:

Wolves are seen wandering amid the ruins of an abandoned chapel. Pagan spirits invade the monasteries, snuff out the flames that burn at the altars and tempt or terrorise the monks. The Church may be doing its best to defeat and subdue pagan nature; the Church is plainly losing. 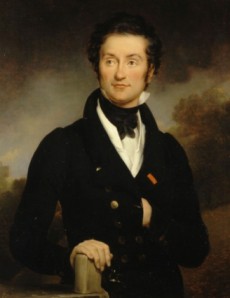 Once she is arrived at the monastery, Jeannie recognises her lost demon lover in a veiled portrait of one John Trilby MacFarlane. It is a Gothic device that will be copied by Oscar Wilde in The Picture of Dorian Gray (1891) — and also by Sheridan Le Fanu in ‘Carmilla’ (1877), Robert Louis Stevenson in ‘Olalla’ (1885), Daphne du Maurier in Rebecca (1938) … the list goes on. It turns out that Trilby was none other than the pious St Columban’s reprobate brother, a Highland chieftain who was damned to Hell for failing to pay due homage to the Church. The revelation reads as follows:

Clearly, the demon Trilby is still haunting her subconscious. The laws of fiction declare he is long overdue for a comeback.

He reappears, first, in the guise of an elderly pilgrim whom Jeannie ferries across the lake. His second and decisive return comes in the form of a mysterious box, which Dougal catches in his net while fishing:

The antecedents of this box stretch back to the dawn of the Western mythical tradition. The box of demons that Pandora opens and thereby unleashes evil on the world; the box that Psyche carries out of Hades and that sends her, once it is open, into a deathlike sleep; the box of jewels that Mephistopheles uses to lure Gretchen in Part I of Goethe’s Faust (1808). Yet it is, at the same time, a visual echo of the reliquaries used by the Roman Catholic Church to preserve the heart or bones or skull of some martyred saint. In whatever guise he takes on, Trilby is too complex and contradictory a figure to sum up by a single reading.

Once he re-enters the house in this form, Jeannie becomes powerless to deny her obsession with the demon. ‘Back on the barren loch,’ writes the critic John Clute, ‘her entrapment becomes more severe, and another dance of dreams and death is enacted, like a sorcerer’s joke.’9 The tragic end of the story might almost seem incongruous had the gradual — nay, almost imperceptible — journey from dreams to damnation not been traced by Nodier with such seamless and devilish skill. ‘Like Jeannie,’ writes Castex, ‘Nodier uses fiction to build an imaginary paradise; yet he remains too lucid to get trapped by his own dreams.’10 Yet this dream entrapped readers across Europe in a wider dream vision of Scotland. It still has the strange power to trap us, as readers, today.

You should not tempt your angel. If one goes down, where is he to stop? Robert Louis Stevenson’s vampire novella ‘Olalla’ is one of the great overlooked works of 19th century Gothic fiction. Published as a Christmas ghost story in 1885 (a year after ‘The Body Snatcher’ and a few months before The Strange Case of […]

A genuine work of art must mean many things; the truer its art, the more things it will mean. –George MacDonald, ‘The Fantastic Imagination’1 In the 1871 children’s fantasy At the Back of the North Wind, George MacDonald’s boy hero Diamond is asked what he thinks of a story. He replies, without hesitation, that “any story […]

I write novels, for children, about magic, set in Scotland. My novels are – of course – fiction, so I could just sit at my desk and make them up. But I don’t. I like to weave authenticity into what I write, through the traditional tales and landscapes that inspire me. I use real landscapes […]