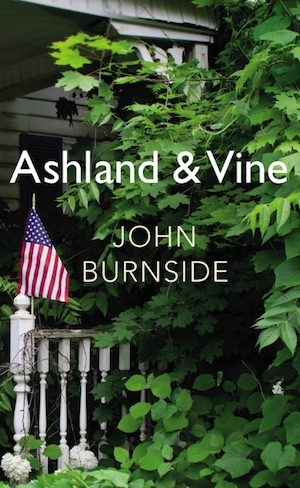 The narrator of John Burnside’s tenth novel is a young woman with a lot of problems. Kate Lambert is sliding into alcoholism as she grieves for her recently dead father, and the story opens when she happens upon Jean Culver’s house while gathering stories for her boyfriend Laurits’ next film project. Jean makes Kate an offer: if she can stay off the booze for five days then she will get to hear some of Jean’s stories. Kate agrees because she knows she has nothing left to lose.

The not-quite-realistic woodland setting of Jean’s house seems designed to invoke a memory of folktales. This is reinforced by a telling reference to Scheherazade early on in the novel, which makes the point that the act of story-telling may not only save the story-teller’s life, but also has a redemptive power upon the listener.

Like Kate, Jean also lost her father very suddenly when she was young, and neither of them has recovered from their bereavements. In Jean’s case, her father was an idealistic lawyer who was shot down at the intersection of two streets, Ashland and Vine. Jean has repeated this location to herself all her life, turning it into a kind of mantra and indicating to the reader the power of even the shortest, narrative-free, phrase to invoke past events.

The tale of the murder of Jean’s father is the first in the novel, and Kate (and the reader) might expect Jean’s subsequent tales to be similarly focused on the personal, about herself and her family. Initially this expectation is met as Jean tells Kate about her unhappy love affair with another woman, and about her brother’s miserable marriage.

But soon we’re being led into wider territory. The novel is set in a town called Scarsville, in America in 1999. This time and place provide a setting in which the characters can look back over the century and consider the official version of their country’s history, as well as other, perhaps contradictory, narratives. As Jean takes Kate through her stories, we learn that in the Sixties her niece was an activist too closely associated with the Weathermen and other underground organisations to risk living in a normal society. Jean tells Kate what it has been like to lose someone she loved to an ‘underground’ way of life. Likewise, Jean’s brother became obsessed with searching for the man who gave the secret of the atomic bomb to the Soviets.

This is the first of Burnside’s novels to be set in America and it feels like an appropriate setting for the themes which the novel explores, because of the ways in which that relatively young country has deliberately attempted, in a more self-conscious way than most other countries, to use narratives about itself (e.g. Thanksgiving) to unite otherwise quite disparate communities.

The power of stories starts to become evident — as Kate spends more time with Jean, she gets her life together and her twin desires for alcohol and her unpredictable boyfriend fall away. In contrast Jean’s nephew doesn’t believe in narrative — he considers history to be simply a series of unconnected events. This is an interestingly gendered response to stories — similarly, Laurits’ films deny the possibility of narrative; for him ‘a story is just the string on which the pearls are threaded’.

This variation in response shows that we are not the passive recipients of narrative — the reader has the power to decide what is and isn’t a story. Stories are not imposed on us — we create them (or not, as we choose) to make our own meaning.

But perhaps Burnside’s own belief in the power of stories to transform their audience overpowers the novel. Jean’s sadness at losing her lover is well-conveyed, but the story of her niece has a sketchiness because it’s too mediated by Jean’s language. The reader never hears this woman speak for herself — we are told how brilliant she was and how she wanted to make society better, but she doesn’t come to life on the page. Consequently, it’s hard to feel much real empathy for her and hard to know what to take from her tale.

Likewise, the story of Jean’s brother’s marriage to a society woman named Gloria suffers because we get no sense of the inner life of this woman. She remains a cipher, and although we’re clearly signalled to agree with Jean’s interpretation of events, she shows a lack of imagination in failing to consider the reasons for Gloria’s apparent coldness.

Not only are Jean’s tales too mediated by her own voice, this voice is identical to Kate’s. Consequently the tone of the novel is monotonous and pervaded by a curiously flat atmosphere. In the beginning this feels appropriate, given Kate’s bereaved and alcoholic state of mind, but as events start to happen and she narrates those events to us, nothing changes. If Kate does reach an understanding of herself then it’s not conveyed in any lightening of the mood.

It’s still worth reading the novel for the consistant musicality of the language. Nearly every page contains phrases as beautiful as: ‘Now, when the phone is ringing somewhere in the house, too far away to answer, or when I open the back door and new snow halts the light, till everything stands in its own penumbra, something easy in me fails …’

In its ambition and intent, Ashland & Vine reminds me of Austerlitz by W. G. Sebald, another novel in which a character met by chance tells the narrator about his life and its connection to defining events of the twentieth century. But that novel achieves a grace and power that is absent from Ashland & Vine.

Ashland & Vine by John Burnside is published by Penguin, 2017.

‘The Sunlight Pilgrims’ by Jenni Fagan

Jenni Fagan’s intensely atmospheric second novel is set in a remote Scottish community in the very near future, covering a period of a few months during which the temperature decreases from –6° to –56°. There is no question that this extreme weather is a deadly threat, but unlike many novels with apocalyptic set-ups, this world […]

I didn’t know how far I was from home but nothing looked familiar —John Burnside, ‘The Fair Chase’ If I could catch the feeling I would: the feeling of the singing of the real world, as one is driven by loneliness and silence from the habitable world’ —Virginia Woolf In a recent essay, John Burnside describes […]

If there is any sensation that is better than walking to the edge of a settlement – a town on the road, a lonely filling station, the huddle of cabins and steam on the highway through the Argentine pampas where, long ago, some friends and I stopped one night, on the way to Entre Rios, […]

Urban History The first of the four quartets in Gift Songs opens with a walking figure that is considering concerns and coordinates for the site of lyric: I’m walking through the windless innertown, —breeze-blocks, mongrels, smashed glass, chantiers— walking towards the sky, and the smell of the tide and reading the names from a map, rue Lumiere, impasse […]