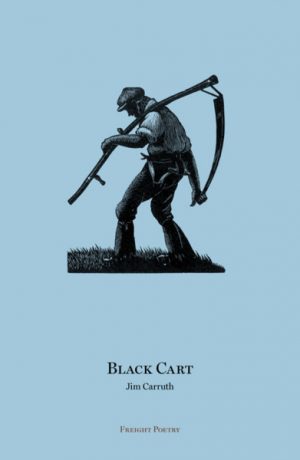 Opening with a plea ‘to learn again the art of careful detail’, Jim Carruth’s Black Cart gathers eighteen years’ worth of finely observed poetry of the rural environment into one volume. Carruth is Glasgow’s Poet Laureate, but he is first of all a farmer’s son, brought up on a Renfrewshire dairy farm, and his latest collection draws richly on the traditions and experiences of his family and rural neighbours, celebrating the farming community’s bond with the land, while at the same time reflecting the vulnerability and hardships of this way of life.

Divided into three main sections — ‘Homecoming’, ‘A Time for Giving’, and ‘Inheritance’ — the collection is underscored by epigraphs from Virgil’s Georgics, as well the names of fields, grasses, and closed-down dairy farms. Such details function as important touchstones for Carruth, in a collection which is carefully curated, deliberately linking the origins of pastoral poetry with the modern day, local and specific concerns of Ayrshire farming communities. The poems develop classical pastoral and georgic characteristics — elegies, portraits of farmers, descriptions of agricultural work, praise of the countryside, and even some didactic content, in the reported speech of rural workers. Crucially, however, Carruth’s poetry also reflects the economic and social realities of farming as a way of life under threat: the closure of dairy farms, the disastrous bovine foot-and-mouth outbreak in 2001, the competitive pricing by supermarkets that forces milk prices down, and ultimately, the sheer hard work and mental fortitude involved in making a living from the land.

This is not pastoral escapism then, but an invitation to reconnection or rediscovery. What comes across above all from this collection is a deep respect for the rural environment and the people who work the land. There are no rural idylls, only working farms, and working people. Carruth’s poems reveal aspects of this way of life that are likely unknown for the average city-dwelling reader, vividly portraying real farm work: slaughtering, tagging or marking animals, ploughing fields, bundling hay bales, learning to shoot, disposing of dead livestock and burning carcasses. There is, however, no room for squeamishness or misplaced sentimentality; poet and reader must not look away out of disgust, or guilt, or fear. Death is thus an inevitable presence in these poems, but the collection is also full of life, in Carruth’s spirited portraits of the farming community, and the physicality of their work.

The agricultural environment is the central focus throughout, with the city appearing only peripherally or tangentially, at times almost as an imagined or unknowable place. In ‘Homecoming’, travelling home to the farm, the city slips away and the rural world becomes increasingly tangible, ‘motorways have narrowed to lanes’, and the ‘broad-brushed fields’ snap into focus to reveal the detail of ‘Scots pines on Harelaw, / a fox on the skyline returning home, / an early morning tractor ploughing for barley’. In ‘Far Field’, the ‘constant hum of the city in the valley’ can be perceived from a hillside vantage point, but the farmer cannot fully comprehend the experience of the city inhabitants:

The question of finding one’s ‘fit and place’, both in the social sense, but also in a deeper ecological sense of belonging or dwelling, is a central concern of the collection. Carruth repeatedly admits to not quite fitting in, in a world which prioritises manual skill and taciturn stoicism. His dual identity reveals itself in his clothing — at times he appears as ‘a stranger in a suit’, on his way to or from a desk in the city. The tension is also a linguistic and cultural one, captured vividly in ‘The Burns Competition’, where Carruth recalls his awkward efforts to perform Burns verses as a child. By contrast, his mother is pictured as part of a living tradition:

This concern with language and land recalls Lewis Grassic Gibbon’s treatment of life in Scotland’s rural environment, invoking the powerful bond between land and folk, and its effects on identity.Black Cart brings out this psychophysical connection very well, revealing the sense of belonging to a place and a way of life not as an unproblematic romantic idyll, but something which may enslave or embitter as well as fulfil. In ‘Siblings’, two brothers are ‘trapped in harness’, locked in a lifelong rivalry with each other and with the land, while two widowed sisters eke out a hard living on their inherited family farm, ‘A tie many would rail against, / but love also in the bond.’

‘Far Field’ addresses more directly the philosophical question of belonging, and the implications of the bond between farmer and environment. The farmer recognises ‘the marks he’s left on this land’, the construction of walls and dykes, as well as his shaping of his herd through selective breeding and bloodlines, but all of this is also vulnerable to time, a way of being which must be maintained through hard work, or otherwise lost. Here and elsewhere in the collection, Carruth touches on the transience of life on the land, also demonstrated in the closure of the dairy farms commemorated in his poem, ‘Until the Cows Come Home’. Carruth’s careful marking of the names of farms and people throughout Black Cart speaks to a poet’s belief in the importance of naming as well as noticing, as an act of remembrance for what is lost, or perhaps as a defence against the loss of what remains, insisting: ‘I will give you names / for names are important’. The loss of belonging is keenly felt in the deaths of the older generation of farming folk, and the decline of the dairy farming economy. Thus the final section of Black Cart, ‘Inheritance’, includes a series of elegies for individuals as well as farms.

Ultimately, Carruth addresses the problem of belonging through writing, connecting with the land and its traditions through poetic craft, as much as his parents were once connected through farming. As in ‘The Trouble with Ploughing’, father and son are both ‘working against the quest for a flawless line’. This turn to ecopoetics aligns Carruth with other contemporary Scottish poets whose work explores questions of ecology and belonging, such as Kathleen Jamie and John Burnside. Closing the collection with the poem ‘Inheritance’, Carruth admits ‘I’ve turned down the full embrace / of a life wedded to the land’. But still the ‘promise of belonging’ invoked in ‘Far Field’ remains: ‘my real inheritance / is the handing down of being’. In Black Cart, Carruth’s commitment to ‘careful detail’, in a modern take on pastoral infused by attentive, first-hand observation and rooted in lived experience, helps to share that crucial inheritance with his readers.

Black Cart by Jim Carruth is published by Freight Books, 2017.

In an extraordinary turn of events, Jim Carruth gained a laureateship before he had a book published. He had a handful of chapbooks in print, but his appointment as Poet Laureate of Glasgow in 2014 predates by a year his verse narrative Killochries. This sparse but fluid sequence follows the course of four rural seasons, […]