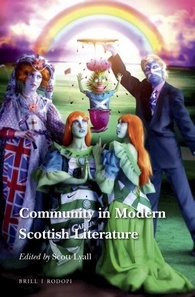 In his Preface to Community in Modern Scottish Literature, Scott Lyall contextualises some of the key ways in which community is conceived of in the contemporary period. Making reference to prominent theorists in the field, he sets out various applications of the concept of community. For David Harvey, for example, community ‘offers hope and warning: communities of resistance can align to achieve radical ends, yet equally the unifying “spirit of community has long been held as an antidote to threats of social disorder, class war and revolutionary violence”‘. For Jean-Luc Nancy community ’emerges at time of profound social transformation or of great turmoil including the destruction of the social order.’ From the outset, then, a particular strength of this book is that it sets out to remind us that community is not something we can ever take for granted. Rather, community, whether at personal or national levels, is shown to be much more complicated than it is often readily presupposed to be. As Lyall points out, ‘a static community, especially in a global age, is surely a dead or dying community.’

In his Introduction, Lyall goes on to addresses assumptions often made about community through a literary critical lens. Given the insecurities of globalism and postmodernism, in Scottish literature community can offer a hook, a means of rooting individuals and places. Yet this is never straightforward, and belonging is shown to be often paradoxical. Through his examination of a variety of fictional texts from the Kailyard, the Scottish Literary Renaissance, through to the postmodern era, Lyall looks at the ways in which myths of communalism often contain traces of their own dissolution.

The following twelve chapters reflect upon community in Scottish literature from an array of angles. In such a short review, these individual contributions can only be lightly touched upon, though it is perhaps important to say something briefly about each.

Timothy C. Baker examines recurring tropes in island literature, such as exile, eternity and temporary community, highlighting the shifting nature of island identity. As Baker suggests, ‘exile and community are fundamentally linked in island writing simply because each is difficult to imagine without the other.’ In his chapter on working-class fiction from 1920 to 1940, H. Gustvav Klaus revisits the work of several neglected writers of the period (including Joe Corrie, Edward Gaitens, Edward Hunter and James C. Welsh), examining the recurrence of similar patterns in their work, one key example being that ‘the protagonist as social idealist must needs transgress the local community’s boundaries and move into the society at large’. With a focus on the legacy of community in Gaelic culture, Emma Dymock goes on to assess the changing nature of community in Gaelic poetry from the nineteenth century to the present, examining the ways in which community has both been celebrated and placed under threat, where ‘rather than keeping Gaelic poetry in stasis, the theme of community has actually been one of the most significant vehicles of innovation’.

Scott Lyall then has a chapter on ‘Hugh MacDiarmid’s Impossible Community’, followed by a chapter on Hamish Henderson by Corey Gibson. For both of these figures, community contained inherent paradoxes; in their respective ways each writer aimed to move beyond restrictive forms of community which they perceived around them, whilst also reframing them from within. Such resistance to community and the need to reshape it from within is also at the centre of Gill Tasker’s chapter on ‘The Alternative Communities of Alexander Trocchi’. In this chapter, Tasker analyses Trocchi’s work through three key periods: Trocchi’s work on the magazine Merlin, his engagement with the Situationist International in Paris, followed by project sigma in London.

In her focus on Scottish drama since the mid-twentieth century, Trish Reid examines the gradual shift in focus from working-class masculinism, through to the opportunities of expression offered by, for example, the establishment of the National Theatre of Scotland. For Reid, such recent, more inclusive modes of expression do not aim to sever ties with the earlier period: politicised populism still permeates through in these more recent interpretations of community and belonging.

In his chapter on alienation in modern Scottish fiction, Alex Thomson is concerned with the so-called nihilist streak in Scottish literature in the 1980s and 1990s. Through delicate analysis of Janice Galloway’s The Trick is to Keep Breathing, ‘a novel of the most profound alienation, manifest not only in psychological and social but also in artistic terms’, Thomson demonstrates that one of the key characteristics of the novel is its stylistic ambivalence. In ‘From Subtext to Gaytext? Scottish Fiction’s Queer Communities’, Carole Jones underlines the need to resist any convenient labels in the reading of gay communities in Scottish fiction. As she points out, ‘the envisioning of queer communities remains ambivalent, presenting rebellious resistance to the heteronormative mainstream as well as what we can term a homonormative embrace of mainstream values.’

In his chapter on James Kelman, Scott Hames explores the difficulty of affiliating Kelman’s work with communal voice. As Hames points out, ‘Kelman’s writing can be seen to puncture and repudiate the forms of readymade peoplehood evoked by the assertion of “identity”‘. There is an inherent resistance within Kelman’s protagonists, for, as Hames asks ‘how can the Kelman hero achieve emancipation “with” others while scorning all the conventional structures of political association and joint action?’

The final two chapters of the book, by Bashabi Fraser and Monica Germana, explore migration and diaspora in Scottish South Asian poetry and the role of the uncanny and estrangement in Scottish literature respectively. Through her analysis of the poetic voices of ‘New Scots’, Fraser suggests that these writers ‘do not present a homogenous Scottish South Asian community, but they do, through their work, assert and affirm that they do not need to write about ethnicity or possess exclusive regional community allegiances as they are, like most writers, moved by the local and affected by the global.’ In her analysis of the fiction of Louise Welsh and John Burnside, Germana’s chapter similarly questions the role of ‘community spirit’. In the work of each novelist there is a concern with strange stories under the surface, with secretive knowledge, which paradoxically ‘bind the community together, hinting at a less manifest, but nevertheless, “real” community spirit based on an increased empathy towards the other.’

Undoubtedly, the key importance of this book lies in the diversity of materials and writers covered. Yet how might we sum up such a wide-ranging book and its various critiques and interpretations of community? One criticism of the book could be its lack of a Conclusion, for no attempt is made to summarise or synthesise its contents at the end. However, as the ideas at the start of this review point out, community is not easily reducible, and, as this book points out, community perhaps really becomes most interesting when examined at the micro-level, when examined through the lens of particular writers, texts and contexts. Lyall lets the chapters speak for themselves and perhaps this is fair enough.

Community in Modern Scottish Literature by Scott Lyall is published by Brill, 2016, as part of the Scottish Cultural Review of Language and Literature series.