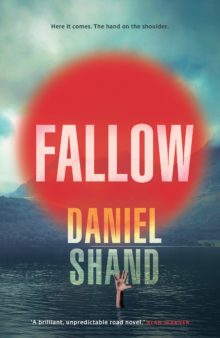 Daniel Shand’s darkly unsettling debut novel Fallow revolves around the relationship between two brothers in their mid-twenties, Paul and Michael Buchanan. The picaresque narrative begins in medias res when we encounter the siblings on the run, lying low somewhere in an unspecified area of Scotland, probably in the hills north of Glasgow. Michael, the younger of the two, has just been released from jail after long imprisonment for a crime committed when he was a mere thirteen years old — a crime so terrible that it earned him the moniker ‘The Buchanan Beast’.

At the start of the novel, their roles are clearly assigned: Mikey, gullible, impressionable and somewhat slow on the uptake, does as he is told, while Paul, his domineering, protective, older brother calls all the shots. The first-person narrator Paul appears to have all the answers and is focused on keeping his delinquent younger sibling safe from any unwanted attention from the press, the police, social workers, or anybody else they encounter along their way. At least, that’s what he would have us believe.

Paul is adamant that they stay undetected at all costs, and they are thus forced to abruptly leave and cover their tracks whenever suspicion is raised. Along their modern-day ‘flight in the heather’ they have run-ins with a host of characters from all walks of life, including a landowner, a butcher, a group of archaeologists, a businessman, two American tourists, religious sect members and even some new-age, ban-the-bomb hippies. We thus follow the brothers as they stumble from one loosely connected incident to the next, their itinerary taking them first from their rural hillside hideout down to Glasgow, then onto the Isle of Arran, and eventually to the narrative’s climactic completion near Gare Loch and Loch Lomond — all the while leaving a trail of bodies and destruction in their wake.

In Fallow, Shand skilfully taps into the rich treasure trove of the picaresque. The fast-paced narrative has an episodic structure, and the extent of depravity, double-dealing, conniving and back-biting displayed by some of the minor characters serves to hold up a mirror to society, satirising its hypocrisy and corruption. With Paul, at first glance at least, we have the picaro — a roguish, low-born rebel and alienated outsider who believes he is up against the rest of the world — who we would, of course, expect to slightly exaggerate his version of events. Accordingly, even though we can already sense that Paul’s fraternal protectiveness and extreme caution might be somewhat overstated early on in the narrative, the reader’s suspension of disbelief is, in a way, upheld by his posing as the textbook picaro.

Paul is, however, not the saint (or picaro) he initially wants to make us believe: he is too tense, too obsessive, too thin-skinned, too vindictive. At the slightest mention of Mikey’s time in prison, for instance, or whenever his little brother becomes obstreperous, he becomes disproportionately irate, cruel and malicious. Paul also continually feels his ‘blood kick in’ whenever anybody takes too much of an interest in Mikey. The way in which Paul bullies and coerces Mikey into doing things his little brother doesn’t want to do, particularly estranges us from the narrator Paul and rather evokes sympathy for Mikey. In each episode, Paul’s chilling lack of empathy becomes more and more obvious and in the course of his narrative he slowly unveils his true, horrid colours, and we begin to realise that Paul might be, in effect, paranoid and downright deluded. In the end, Paul’s depravity and hypocrisy turn out to be far greater than that of either Mikey or of any of the characters they encounter along their peculiar road trip.

The external flashbacks that frequently interrupt the narrative fill us in on what really happened on that fateful day many years ago, when the two brothers were ‘ticking off’ school: a young girl had been brutally murdered. And, despite Mikey taking all the blame for the crime at the time, it eventually emerges that it was, in fact, Paul ‘who-dun-it’. This revelation, when it comes, is by no means surprising: all the hints at Paul’s wickedness and estranging unreliability up until that point are too obvious and repetitive. We can now, as careful readers, finally congratulate ourselves on having ‘known it all along’.

What this disclosure does, however, is make us doubt and question absolutely everything we have been told before: what was real, and what was merely a figment of Paul’s deranged imagination? Remarkably, this early revelation by no means impedes the novel’s suspense, as we still want to find out the true reason for Paul’s unreliability: it is never quite certain whether Paul’s unreliable narration derives from a premeditated, sinister and devious motive; whether it serves as a coping mechanism; or whether it, in fact, represents the ravings of a remorseless madman. And, Shand masterfully keeps us guessing until the (slightly confusing and perhaps unnecessarily overladen) end.

Fallow owes much to its predecessors of Scottish literature. When it comes to animal cruelty and the genuinely disturbing psychosis of a deranged protagonist, parallels to Iain Banks’s The Wasp Factory could certainly be drawn. With regard to the matter-of-fact treatment of the various killings committed and the novel’s morose, laconic dialogue Magnus Mills’s ‘Scottish novel’ The Restraint of Beasts comes to mind. As regards unreliable narration, and doppelgänger or evil-sibling tropes, there are also some recognizable undertones and echoes of Robert Louis Stevenson’s Dr Jekyll and Mr Hyde, Kidnapped and The Master of Ballantrae as well as James Hogg’s Confessions of a Justified Sinner. Moreover, Paul’s conceit as well as his thrawn and fanatical determination to ‘show them all’ are somewhat reminiscent of Scotland’s two great literary bullies, John Gourlay from George Douglas Brown’s The House With the Green Shutters, and James Brodie from A. J. Cronin’s Hatter’s Castle. We even have a nod towards Renton’s famous sermon-at-the-bottom-of-the-mount.

In Fallow, Daniel Shand puts these influences to excellent use to present us with a truly harrowing tale that self-assuredly combines picaresque elements with a fascinating psychological study. Shand’s debut novel is at times darkly comic, at others disturbingly unnerving. The powerful characters, the creative use of language, and the strong settings are particularly effective. And, notwithstanding some minor shortcomings, Fallow remains an exhilarating and gripping read indeed, albeit not one for the faint-hearted.

Fallow by Daniel Shand is published by Sandstone Press, 2016. It is the winner of the Betty Trask Prize for 2017.

To begin with, it seems prudent to point out that anyone who expects that the contributions in this collection will be set in or revolve around the city of Edinburgh may be somewhat disappointed. Apart from the title and the appealing illustrations of iconic landmarks of the city, the anthology’s connection to Edinburgh lies in […]