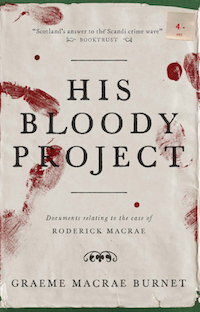 Graeme Macrae Burnet’s His Bloody Project has already achieved well-deserved fame. In 2016, it was shortlisted for the Man Booker Prize. So it needs no recommendation. It does, however, merit analysis, for this is a novel that manages to interrogate the complex banalities of everyday life through the horrors of a crime — and vice versa.

This is a volume in which every piece matters. No skipping over the preface here, for in it the modern ‘editor’ Burnet takes all the surprise out of the book. Sort of. Burnet quotes the introductory paragraph from a murderer’s memoir. Roderick Macrae stresses: ‘My life has been short and of little consequence, and I have no wish to absolve myself.’ Burnet follows up: ‘So begins the memoir of Roderick Macrae, a seventeen-year-old crofter, indicted on the charge of three brutal murders.’

How can every piece matter if the book can hold no surprise? Well, it does hold a surprise — and more of that later. But in a ‘whodunit’ where we know perfectly well who did it, the question is obviously ‘why?’ That is the motivator of this very writerly text — a book that puts its readers on the spot.

The book provides numerous perspectives on Roddy Macrae’s act. We read the neighbours’ statements to police, Roddy’s own narrative (which takes up a good half of the book), medical reports on the victims, the opinions of a Perth prison surgeon, an account of the trial, an epilogue about the publishing vagaries of Roddy’s text, and acknowledgements. The acknowledgements turn out to be important, because they helpfully make clear that this is in fact a fiction — however factual it may appear.

One of the great virtues of this novel is how it manages to echo the forms and discourses of nineteenth-century criminal cases. Moreover, despite its fragmented structure, as we move from statement to memoir to report, Burnet maintains an accurate yet lively rendition of Victorian language and cadences. Fragmented the form may be, but you’ll read this book at one sitting.

We read compelled by the question Roddy poses to himself early on — what if life had been different; what was the point at which things started to go wrong? Was it the death of his mother? Or the oppressions of a neighbour? Viewed from a distance, Roddy realises, it’s hard to imagine anything important happening in Culdie — and the places, by the way, are real. But clearly, little things add up to big things.

The question is, what is big enough to matter? We hear from the neighbours’ statements and by reading Roddy’s narrative that he is difficult to categorise. He is either sullen or given to fits of sniggering; he is either dim-witted or unusually gifted; he is either a child or sexually charged. Every speaker gives a different perspective. And every speaker also reveals something of their own biases or potentials — but not enough to categorise their opinions as entirely ‘true’ or ‘false’.

Compounding the problem is that Burnet encourages his readers to bring twenty-first-century sensibilities to bear on nineteenth-century discourses. Surely the problem lies in the crofters’ (inevitable) mysticism and fatalism? Class antagonisms must play a role. Rural poverty has to be the explanation. Early anthropologists are covert racists so of course they miss the point. Burnet teases with possibilities that appeal to our superiorities as readers.

And yet, as we discover late in the book, there is a horror. And that horror makes finding Roddy’s motivations problematic. What good will it do to understand motives?

It turns out that the trap is sprung not under Roddy, but under the reader. ‘Editor’ Burnet closes with an epilogue that tracks the publishing history of various trial-related documents. The lawyer who tries to save Roddy on grounds of his mental incapacity hopes to build support for the condemned man by publishing the memoir. What is published instead is the sensationalised HIS BLOODY PROJECT: the RAVINGS of a MURDERER — to the effect, in Roddy’s case that we might imagine. But the use to which Roddy’s supporters hope to put his memoir should give armchair detectives pause.

Roddy’s is claimed to be a work of ‘literary merit’. ‘To put to death an individual with the sensibility and intelligence to produce an extended literary work, would’, we hear, ‘be a cruel and uncivilised act.’ Arguments about the death penalty notwithstanding, this generous-spirited appeal that puts a literary work in equivalence with grotesquely murdered people might give us pause.

It will send you back to reread this book. This time looking for the points at which things started to go wrong — for you.

His Bloody Project by Graeme Macrae Burnet is published by Contraband Books, 2016.

Though cinematic aliens pile up on the White House lawn, and monsters show a fatal attraction to a dwindling colonial power centered in south Britain, science fiction criticism typically considers its subject global in practice and universal in aspiration. This is a position of paradox—and therefore worthy both of the fictions of science and of […]

Future Scotts: The Aliens have Landed

Walter Scott, we take for granted, wrote within the historical and realist tradition. Yet Scott’s true heirs may write not of the past, but of the future – not of Scotland, but of boldly going ‘where no one has gone before’. Certainly, whether as poet or as novelist, Scott favored the past. Writing of events […]

Where We Never Were: Scottish Women Writers at Walter Scott’s Abbotsford

‘Our house is the least that ever harboured decent folks since the traditionary couple who lived in the Vinegar bottle’, Walter Scott wrote to the actress Sarah Smith in 1814. Still, ‘if you come […] we will find a corner for you.’ As with Smith, a substantial number of Scott’s visitors to his house in […]