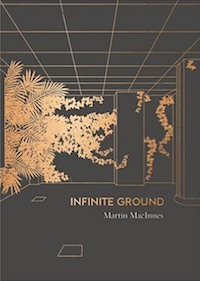 Martin MacInnes’ debut novel is a striking, estranging and cerebral exposition of the human body and modern alienation set in South America, ostensibly far removed from the author’s roots in Scotland. Before getting to the narrative itself, credit should be paid to the aesthetics of the book as a product, a gloriously decorative hardback with a fabric that emphasises the ornate and elaborate structures and mechanisms contained within.

The plot seems irresistibly straightforward: Carlos, twenty-nine, meets his family in a restaurant, La Cueva, during the intense heat of a South American summer. The reason for the meeting is procedural — a reunion. Part way through the meal, Carlos heads to the bathroom and disappears. As the narrative explains: ‘Carlos had gone to the bathroom and then to all intents and purposes he had stopped existing.’ A former inspector, unnamed throughout the narrative, is brought out of retirement to investigate and track Carlos down. At this point the reader is still in the familiarity of the police procedural — a missing person and a policeman on the verge of retirement takes on one last case.

From here, however, MacInnes takes the reader into a reality-bending mystery in which the oddities and inconsistencies do not so much as fail to add up, they chafe against one another in the inspector’s quest to separate facts from fiction. The prefatory note to the novel indicates the first self-reflexive reference to genre and MacInnes’ literary precursors in the line: ‘Why should I be disgusted by the mass that came out of the cockroach’. Referencing The Passion According to GH (1964) by the Brazilian writer Clarice Lispector, the reader is now in the territory of Franz Kafka and, as Docx notes, ‘the link […] is more than entomological’.

A call in the middle of the night is usually indicative of an unexpected event and potentially bad news. The distancing effect of the tone is sufficient to inform the reader, but to offer only a brief insight into the nature of the conversation. One can imagine the clipped, taut exchange following a late night intrusion, the caller necessarily ingratiating to the Inspector, quick to emphasise how appreciative they would be for the assistance but also sufficiently respectful to prevent the application of unnecessary pressure.

In nods to Don DeLillo and Alasdair Gray, the Corporation which employed Carlos reveals they deploy ‘outside performers’ who impersonate real staff and has ‘contingency sites’ outside the city in order to relocate workers in the event of a disaster or apocalyptic event. The woman who the inspector interviews and who claims to be Carlos’ mother reveals herself to be an impostor. Following the exploration of two plausible possibilities as to the motivations behind Carlos’ disappearance — he was kidnapped or fled to avoid prosecution — the inspector learns that his missing subject was suffering a debilitating disease which was causing his body to break down. Immersed in concerns about the virulent nature of the infection to which Carlos was subject, the inspector recreates Carlos’ office (thus creating a simulation and a double) in order to continue his investigations.

At this point it is worth noting that the intersection of the human and the environment means the presence of multiple ecosystems at work in the narrative. Infinite Ground could be just as easily be about the nature of the ecological imperative and its relationship with the human body which it has consumed. In the face of such physical and psychological breakdown the novel speculates that Carlos’ plight could easily be a figment of the pressurised Inspector’s feverish mind — beset by impending retirement and a bamboozling array of pressures. MacInnes’ capacity to combine scientific prose with narrative pace is formidable and contributes to the feverish, claustrophobic atmosphere which infects the reader’s perception. We are rarely given in-depth insights to the psychological states of the Inspector or Carlos and this is a deliberate choice on the part of the author. It does not detract from the quality.

The reader arrives at the appropriately named Hotel Terminacion in the final section of the novel, still attempting to conclude whether the Inspector can solve the mystery of Carlos’ disappearance at all. As Malcolm Forbes notes, the final section presents twenty-nine possible solutions and ends with a flourish characteristic of the panache with which MacInnes delivers this startlingly striking novel: ‘Carlos isn’t here. Carlos isn’t gone. This isn’t everything. This is a brief light.’ This Terminacion may well be a regression, given that everything around the inspector is disappearing and is rendered disoriented.

The multiplicity of MacInnes’ narrative and plot is expansive and ranging, and in structure represents a geometrical puzzle as as much as a novel – surprisingly these formal conventions are maintained and the author cleverly deploys other alienating strategies in order to challenge, bewilder, flummox and distract the reader.

In terms of locating the genre, MacInnes’ novel resists arrest and is persistently straddling the policed boundaries of the popular and the literary. There are notable antecedents to the writing and a rich lineage of novelists inform the complexities and qualities of the prose which is contained within. This is not to say that the novel falls into the trap of knowingly and proudly displaying the influences without actually letting the author’s own voice show through — far from it. MacInnes’ confident tone is distinct from the allusive mosaic of references. Infinite Ground is as an original debut as this reviewer has had the pleasure of reading and writing about for some years.

Infinite Ground by Martin MacInnes won the 2017 Somerset Maugham Award and is published by Atlantic Books, 2016.

Lizzie Eldridge’s second novel is a biting and bleak study of love, betrayal and their consequences, set amongst a group of friends based in Glasgow. For Moira, twenty-eight, quick-witted and feisty, the security of her ever-dependable relationship with the dutiful Andy is a branch to cling to as she finds herself threatening to be swept […]

Iain Banks’ writing can be located within a context of contemporary British fiction, namely the period after 1970. The rationale for the provision of a context wider than Scottish fiction is determined by Banks who, as Thom Nairn explains, has ‘expressed doubts about the place he may or may not occupy in a specifically Scottish […]