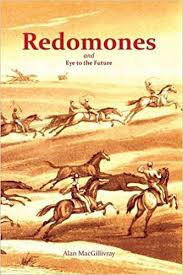 Redomones is Alan MacGillivray’s fifth poetry collection. But it is the first substantial contact this particular reviewer has had with MacGillivray’s work, beyond individual poem appearances in magazines and papers such as The Herald. This is arguably not a disadvantage, as Redomones is a real gallimaufry of moods, subjects and styles (from elegy to ballad) all connected by an underlying love for Scotland and its future; at a little over one hundred pages in length, the book has more of the feel of a ‘New and Selected Poems’ volume about it.

Reading these poems, you are made aware of the range of MacGillivray’s own reading. Many poems contain intertextual or literary references, for example, to Alasdair Gray, Neil Munro, Raymond Chandler, Norman MacCaig and Frank O’Hara (whose free-associative style MacGillivray recalls in an elegy for Donald Dewar entitled ‘Big Guy in Town’). With this profound reading comes a variety of subjects and at times you might wonder if MacGillivray is trying to upstage Edwin Morgan as the poet who can write a poem about more or less anything, and indeed there are two poems in tribute to Morgan here.

MacGillivray is a retired teacher and university lecturer who has worked keenly for years for the furtherance of Scottish literature as an academic discipline — a subject celebrated in the poem ‘Turn of the Season’, written (according to MacGillivray’s extensive notes) to mark the bestowal of Honorary Fellowships ‘for services to Scottish literature’:

MacGillivray wittily apologises for being a teacher and giving many of these poems a paragraph of notes each at the back of the book: ‘once a teacher …’. That said, many of these poems, such as the one above, do need something of an introduction or explanation if we are to understand their true significance. Take for instance the title itself — ‘redomones’ are wild horses that are in the process of being broken-in but still retain wild characteristics, something MacGillivray would like us to have in mind when we think about his own poems which often contain anger or wit, tempered by formal poetic control. The word ‘redomones’ is used by Argentinian gauchos and this, even without MacGillivray’s notes, brings to mind the brilliantly colourful life of Scottish elder statesman and writer Cunninghame Graham whom MacGillivray uses as a heroic, swashbuckling, prototypical example of early Scottish nationalism and internationalism. The poem ‘King Robert IV’ deals in a jocular light with the idea that Graham may have had a legitimate claim to the Scottish throne, and imagines the fantastic ‘three-week’ long reign Graham himself predicted he might enjoy, but it is ‘Esperanzas’ which is one of the finest poems in Redomones. Here MacGillivray deals with perhaps one of the most poignant but fascinating events in Graham’s life: the death of his wife Gabriela in 1906 and the journey he undertook to see her buried on the island of Inchmahome, digging the grave himself with the aid of an old tenant. By 1936 and the beginning of the Spanish Civil War, Graham himself would join his wife, and MacGillivray then picks up on the political upheavals of the time: the old tenant and then the tenant’s grandson speak to the necessity of going on fighting against tyranny and oppression for the sake of liberty and equality:

The serious political intentions of this collection are relieved by moments of bathos and deflationary wit that Robert Garioch would have been proud of — such as lines ‘From the Pictish Phrase-book’ which include ‘This is truly a fine necklace, madam. Your husbands clearly took great care of their teeth’. However, the main ley-line running through the whole collection is a sense of polemical bite and anger at the way Scotland has been smeared and misrepresented. MacGillivray takes aim at Westminster, the tabloid press, and even the BBC weather report which shows Scotland as smaller, and therefore less significant, than it really is, in order to ‘put you in your place’ (‘BBC Weather Map’).

MacGillivray is clearly an enemy of bigotry and discrimination — in certain poems he slams sexism, racism and Anglocentrism and in others he welcomes refugees and immigrants into Scotland. The political engagement of the collection culminates in ‘Eye to the Future’ which is a sequence of poems written in the run-up to, and aftermath of, the 2014 Scottish Independence Referendum and the frustration and then determination and renewed energy felt by an avowed ‘Yes’ voter. While these poems are stirring and rhetorical, and the present reviewer is completely in sympathy with them, the real strength of Redomones comes across most vividly when MacGillivray speaks from his own experience as a teacher.

The poem ‘Symposium in the Park with George’ shows us an educational genius in the form of philosopher George Elder Davie (a person to whom the much overused appellation ‘genius’ really does apply) and how harmful governmental policy concerning education is doomed to fail because of its sheer ignorance of Elder Davie’s thesis of the ‘democratic intellect’. ‘The democratic intellect’ is a key phrase to this collection and MacGillivray shows how, in his role as teacher, he has tried to enact change in Scotland for the better and has served the interests of Scottish life and culture, the democratic muse and intellect. This gives rise to warm memories of old like-minded colleagues (such as ‘Remembering Jimmy’) and the startling elegy ‘Anger’ for a dead pupil and the indignation that a teacher feels for the sense of a life lost before it had really even begun.

In another elegy for a dead teacher friend, ‘Lord of the Dance’, the speaker extols his subject’s (James Muir) virtues, and these could easily be the kernel of MacGillivray’s own life’s work, as abundantly demonstrated in Redomones:

Redomones and Eye to the Future by Alan MacGillivray is published by Kennedy and Boyd, 2016.