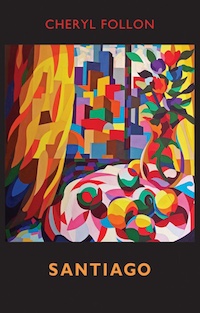 Santiago is Cheryl Follon’s third collection of poetry. It departs from the previous two, in subject range and in the form of the pieces it brings together. And it is a departure, too, in terms of our more usual expectations of poetry. It is a collection that assembles between its covers the immense and the tiny, the physical and the metaphysical. It raises questions around just about everything — everyday objects, everyday emotions, places, the things we eat, the very elements that make up our physical reality. It also raises that question that pops up frequently in my own poetic life: what is a poem? How does it differ from prose? When is a door not a door?

A glance at the first piece was followed immediately by a flick through the rest of the volume, to check whether I needed to tune to a new frequency. And indeed, all of the other poems take the same form as that first, with differences only in length. These are not poems as we know them, or what our eye has come to expect of poetry. It was like looking across a broad landscape on a day of promising skies, and feeling immediately expanded and relaxed.

These are short pieces, none longer than ten lines, some only two. But they are all suggestive of something much, much bigger, like boulders chipped from a larger rock and then cut and cut until they sparkle like diamonds. These little prose-like chunks are prose only in that the lines go right to the edge of the page rather than stopping halfway across. On reading, listening, experiencing, then returning to experience in a new way, these are poems, using the poetic ‘trick’ of chiselling ideas down to small, beautiful jewels, and of finding the perfect marrying of form and meaning. Prose poetry can go so very wrong, but here, every line leads seamlessly on to the next while at the same time finding the perfect length. And the prose form is apposite. Its mundanity, along with the ordinariness of the language, provides a perfect vehicle for the revelatory impact of each piece.

In reviewing the volume, it is delightful to be able to quote some of the poems in their entirety. Here is ‘Netball’:

If you think you may have seen this one before, perhaps you have. It was commissioned for Glasgow’s Commonwealth Games and featured on a poster. It would work so well in that context — short, immediate, but leaving a hum in your ears as you walk away. I’m so glad it was out there in the world, where most folk don’t think poetry is for them. In this collection, it’s one I found myself returning to again and again, for its magic of transformation, for the breathless genius of that last image.

Journeying and places form an important theme of the book — we go from Hanoi to Iceland, our journey filled with observations along the way, on everything from a croissant to the sea. This is ‘New York’:

The pace here is astonishing, with two strong, physical metaphors and that central, disturbing idea of trying to do these things in the dark, but then, the landing point at the end of the poem, ‘immaculate.’

There’s a lot of humour in this collection too. I laughed out loud at ‘Time Difference’:

… and at ‘Airline Food’, which had me simultaneously blanching in queasy recognition:

The book’s blurb reveals some interesting detail on the background to this collection. Follon, we are told, started with a mission to find a book by a Greek philosopher (she didn’t know the author, which must have created a difficulty right at the outset) with a title something like On (or maybe In) Delight at the Nature of Things. Her search took her through many texts on the nature of our physical world — the stuff it is made of, the laws that govern our planet’s existence. But she never found the title she was seeking. And so, Santiago is Follon’s own version of that book.

Delight is clear in this collection. It is surprising, fun and funny, colourful and vibrating with energy. Its accessibility is one of the keys to its power; in just a few lines, Follon gets right to the crux. But the real genius for me is the lightness of touch. There is no sense of working through or finding a way. Idea and poem arrive simultaneously on the page. Immaculate.

Santiago by Cheryl Follon is published by Bloodaxe, 2017.

This pamphlet, Stephanie Green’s second — and now sold out — brings together poems inspired by the landscapes and culture of the Shetland Islands. Islands and the ways of life of their communities fascinate me, as they do many others, and more so as it seems our lives become even busier, even more crowded, even […]