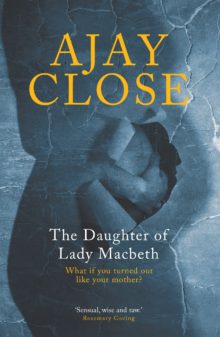 When Freya gives her mother a scarf for Christmas, Lilias reciprocates with tissue-wrapped lemon soaps. It’s the same every year. Theirs is a relationship that endures more from habit than love. ‘What if you turned out like your mother?’ the cover of Ajay Close’s The Daughter of Lady Macbeth asks. Thespian Lilias had been starring as the play’s leading lady when her waters broke onstage. Or so the story goes. Freya has learned not to trust anything Lilias says, especially regarding the grainy black and white photo of the man she claims is Freya’s father. But perhaps Freya has more in common with her mother than she would like to think.

The novel opens with a pregnant Lili standing on a moor with her two lovers, one of whom has a shotgun. It is 1972. The book interweaves this narrative with Freya’s journey through IVF. The experiences of parent and progeny are mirrored, with the fate of both developing in parallel. Five decades apart, both women sojourn to the country and stay at a boarding house-slash-farm run by a domineering landlady. In 1972, the unmarried Lilias is hiding her pregnancy from the world, while in the present day, Freya is to rest while receiving hormone injections at a nearby clinic.

Close fills the novel with a finely drawn symmetry. Sometimes, as above, one storyline mimics the other, for example, when both women fall for their landlady’s son. Elsewhere imagery is repeated: positioned near the middle and end of the novel, Freya tends to two different men, in the first scene, styling the hair of a younger man, and in the second, tenderly cutting that of an older one. In other places, we hear an echo in the language used: bulls processing along a corridor at an auction in Freya’s narrative are ‘inexorable’, a word used two chapters later to describe a pig’s giving birth in a shed in Lili’s, the repetition foregrounding nature as a force that neither city dweller is accustomed to.

At other times the symmetry is skewed, such as in the disparate reactions of Freya and the young Lili to their pregnancies. Now in her forties, Freya never thought she would conceive. Suddenly she feels like the women she has always envied, for whom pregnancy was easy:

Close celebrates with a page-length chapter devoted to the foetus’s development: she imagines her own body working under strain, as though the feeling of sacrifice is important, willing herself forward into the selflessness of motherhood. She marvels at this everyday miracle: ‘Her gills became ears […] Next thing, she had eyelids, tooth buds, pursing lips, a wrinkling brow.’ Freya is mature and well read on medical matters. Meanwhile in 1972, a teenage Lilias thinks of her pregnancy as akin to being eaten alive.

The novel deals with themes of identity and belonging. In this, rural life juxtaposes the urban: the dialogue of the country characters contains more Scots; the metropolitan characters visit delis and wear suits. The dual setting provides a stage for clashing economic and cultural values: Freya feels the farmhouse B&B would be improved with some Farrow and Ball paint. And when a cottage she visits has an armchair with an ‘ill-fitting stretch cover’, and a pile of newspapers for a side table, she considers it a ‘slum’. The symmetry discussed earlier extends to the condescension of mother and daughter towards their country hosts: Lili brushes crumbs from a seat before sitting down, and surreptitiously feeds the gristle off her plate to the farm’s spaniel. Though at times Freya speaks of city life as tiresome (‘the trending tweet retweeted, the rave-reviewed restaurant tried […] the season’s fashion diktat obeyed’), after spending months in the country her prejudices persist: she sees the place as ‘a backwater, the last market for winceyette nighties, where the gastro-pubs still served cod in parsley sauce’.

Towards the end of the book, the expanse between these two worlds, their different priorities and beliefs, is spanned by a new attachment: a man from Lilias’s past, an ageing shepherd who might be Freya’s father. Where previously Freya has accused country people of smelling of ‘mince and onions’, or the detergent from their clapped-out washing machines, now she finds his scent, ‘the fusty-leathery blend of skin and sheep and coal smoke’, attractive — and while not quite reassuring, she seems to better understand its origins after herself roving in the landscape.

It is, at its centre, a story of lust. When Freya, fresh from the bath and wearing only a towel, flirts with her landlady’s son, it could feel like cheap thrills, but the story’s complex relationships are well considered, their intricacies giving texture to the plot. Desire bubbles from the pages, the sexual act ‘a wordless pleasure that takes her by stealth, blurring her edges, reducing her to anonymous flesh’. But it is equally a book about cruelty. The countryside is a place of darkness, where a sow might eat her newborn piglets, and a dead lamb is flayed so that its skin can be tied to an orphaned one. Similes are coarse: a piglet is described as ‘pale as tripe’; the landlady’s forearms suggest ‘white pudding vacuum-packed in its sheep-gut sleeve’, while her wrists have ‘the heft of honey-glazed hams’. The author confronts us with the unpleasantness — the muck and blood — of rearing livestock. The comparing of living flesh to animal products is perhaps more shocking than insightful, but it is driven by our heroine’s arrogance. Freya refuses to see beyond her bourgeoisie existence, horrified that the olives she buys her shepherd moulder at the back of his fridge.

Of all the book’s relationships — Freya’s marriage, her fragile filial love, her lustful cravings — it is her complex feelings for the shepherd, her fear of him and her need, that are most palpable:

As the novel nears its close, tensions between Freya and this man increase. During a confrontation, she notices the strengthening of his accent, a reminder of their difference, as again language plays a part in the theme of belonging.

Of the two things Freya wants most in life — a baby and to know who her father is — one is denied to her. But Freya’s imperfect narrative is the book’s strength: we are presented with an oddly unsatisfying conclusion that perfectly mimics those we experience in real life — after all, endings are a thing of fiction. The final pages see us returned to the beginning: this time it is Freya who stands on the moor, the mirroring fulfilled in Close’s repetition of whole sentences from the novel’s prologue. ‘There was the land and the sky,’ we are told, and for the tightly wound Freya, the simplicity signals a fresh perspective.

The Daughter of Lady Macbeth by Ajay Close is published by Sandstone Press, 2017.

‘Pain is easy; pain is something with which I am familiar’, the eponymous anti-hero of Gail Honeyman’s bestselling novel tells us. On Fridays, Eleanor Oliphant buys two bottles of vodka, takes a few big swigs and falls asleep on the sofa: ‘I drink the rest […] over the weekend, spread it throughout both days so […]

Fifteen-year-old Aggie lives on a sheep farm in the middle of Texas cattle country. The only town is four miles away: ‘One little main street with a few stores selling random stuff, one dusty antique place that I never in all my life saw open.’ But Armadillos is not a portrait of small-town life. Brought […]